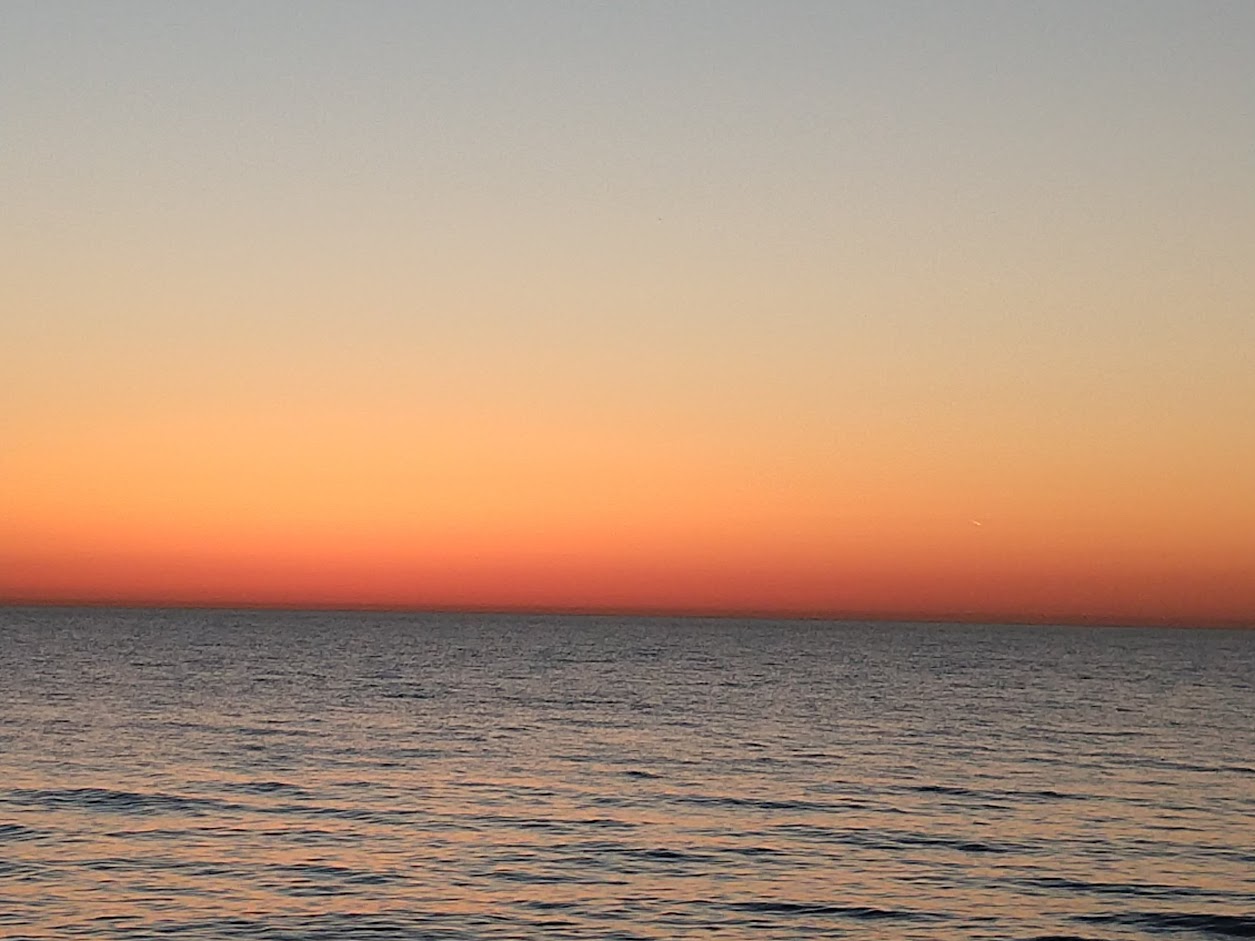 After an oddly restless night in which I woke up for good around 3:30, I dragged myself out of bed and went to the gym, but watching our President, even on mute, was too dispiriting.

I began to wander, ending up, inevitably, at the lake. The moon was still full and bright and chilly, gazing with stolidly in the lightening west, and the sun, not yet risen, was wiping the sky over the water with a riot of pinks and oranges. The empty and endless sky was only briefly and mildly profaned by a plane red-eyeing its way over Michigan.

As I walked north, I imagined the water spreading itself even wider as it stretched the length of Wisconsin. But then I remembered, as with everything in that once great state, even the lake is being subverted for the needs of capital and the gratification of Scott Walker. To wit:

The Wisconsin Department of Natural Resources has approved the city of Racine’s request to pull 7 million gallons of water daily from Lake Michigan for a Foxconn Technology Group manufacturing plant.

You remember Foxconn, right? The international tech/suicide factory, which is opening up a flatscreen factory in Racine? Its approval was rushed through by Scott Walker, eager to create jobs, any environmental or worker protections be damned. It’s part of Walker, and the broader GOPs, race to the bottom: encouraging states to compete for jobs by removing all regulations and protections.

Is this new diversion part of that? Perhaps: it is certainly saying that the needs of Foxconn, and these jobs, is more important than the Great Lakes Compact, which is already slightly wobbled by Waukesha.

Ah, but, you might say: surely this is an overreaction. After all, the request was approved by the Wisconsin Department of Natural Resources, which is tasked with protecting the immense natural beauty of the state. But, I reply: remember this is Walker’s Wisconsin.

Nowhere is this (his rush to sell the state) more clear than in his Department of Natural Resources, which he’s gutted and filled with cronies and industry oxpeckers. He’s had it reduced to being the fetchservant of extraction and the state’s leading climate denier. It’s been essentially privatized, and it shows, and the doddering legislature has no interest in changing it.

On April 25th, the Wisconsin Department of Natural Resources (DNR) hastily approved the City of Racine’s request for a diversion of Great Lakes water for a private entity, Foxconn.  While the request was pending before the DNR, the CIC, and many regional and Great Lakes state partners, requested that the Regional Body and Compact Council review the proposal because of several flaws including that the use of the water was not for a public purpose, but rather for a foreign corporation’s use.  The CIC feels it is unfortunate that DNR is ignoring not only the spirit, intent and plain language of the Great Lakes Compact, but also the voiced concerns of thousands of Wisconsin citizens.

Ignoring citizens? Ignoring the “spirit, intent, and plain language” of an international treaty, especially one regarding the environment? And doing it all to give away the store to a huge worker-breaking corporation? It’s not just Wisconsin: it’s the quintessence of the GOP.

Now, this isn’t a huge diversion. The numbers sound enormous, but most of the water (save 2 million gallons) will go back to the lake. This, in an of itself, won’t destroy the water. But it is another straw in the lake, another excuse to break the compact, and it is done so for the obvious, and therefore banal and universal, of reasons: the thrill of jobs.

If opening a plant (that won’t even hire that many people, and certainly not the non-degreed working class of Racine) is justification for breaking the Compact, what won’t be? Where does the line get drawn? This is how treaties die, and this is how lakes dry.

Lake Michigan seems like it stretches on forever, but just past the sunrise lingered the sleeping shore of Michigan, with its millions mere miles from our millions, all thirsty and ready to stretch and shower and brew coffee, greeting the first real day of spring after an endless winter.

The point of the Compact is to preserve the water so we can use it. If it is broken, if the rules no longer matter, it is only a matter of time before the treaty table becomes hectic, violent, and impossible.

If that seems a little extreme, let us look at how an enormously successful water compact is beginning to fray. It involves, with little surprise, Arizona.

After expressing their frustration privately for weeks, negotiators for four Colorado River Basin states sent a strongly worded letter to Arizona water managers on Friday, singling out the actions of one state agency as “threaten[ing] the water supply for nearly 40 million people.”

In the letter, the Upper Colorado River Commission said those actions could threaten efforts to conserve water and prevent Lake Mead from going into shortage for as long as possible. It could, they wrote, also undermine a decade of broader collaboration intended to avoid costly litigation between Colorado River users.

This is pretty complicated, but basically, Arizona is gaming a hugely complex treaty in order to maximize the water allowed it from Lake Mead and Lake Powell. It is actually using less water from one lake in order to trigger a release from the other, while all the other states in the compact are trying to conserve for real.

I say it is unsurprisingly Arizona because, in the history of Colorado River management, Arizona has always been the fighter. It delayed signing the treaty for decades, afraid (with some justification) that it would be taken advantage of by California. The Central Arizona Project, which is the now-archaic sounding name of its water resource commission, wasnt fully finalized until the 60s. California and Arizona nearly (sort of nearly) went to war over water in 1934.

Indeed, most of Arizona’s, um, interesting political culture can be tied in some ways to its endless fight for more water, both against its neighbors and against the federal government. And the odd thing about this current fight, which has led to a flurry of mean words between the signatories, is that Arizona is technically only breaking the spirit of the Colorado River Treaty, in a very Arizona way.

In theory, the CAP isn’t really doing anything wrong. John Fleck points out that he was wrong to they say “manipulated” or gamed” the system: they just optimized their usage.

The whole thing is hugely complex, and the article I liked up top, and of course the Fleck piece, do a much better job of explaining it. But what’s really interesting to us here is the fact that they aren’t really breaking the treaty. It’s just that it is easy to break the spirit of things, and still be in your rights, while destroying what has been worked for.

The treaties that govern water in desiccating times are huge and complex, with enormous overlapping needs and the weight of historical baggage. They are between states and countries, between conservation and development, urban dwellers and farmers, ranchers and miners, business and outdoorspeople.

The fragile Colorado treaty and Great Lakes Compact were years, even decades, of work in the making. They are historic and important, and it is blindingly frustrating that that work can go away.