Hey all- I know it has been a bit of a spell since I posted. Started a new job, in an office, and am working out when I am going to write. Somehow haven’t been able to get up early enough to do so, but am working on it. Will start posting more before and after work, starting next week.

Back to regular posting soon.

Sorry for the slow week. We’ll be doing a lot of blogging next week, as the Presidents of the United States and North Korea flip through their dictionaries to find the most obscure insults they can understand (Un will call Trump a “dew-beating wandrought” and Trump will respond with “very bad and very sick ‘Rocket Man'”). It’ll be fun.

I had a whole Quick Hits and Weekend Reads planned out, but as I went through the stuff I collected during the week, it was all really depressing. I understand that isn’t unusual here, but after another stupid and hateful week, just didn’t want to do to any of you.

If you’re interested, you can read about how 1.3 billion people live on environmentally and agriculturally degraded land, or how dangerous Pipeline 5 under the Great Lakes is (something we’ve talked about), or how lead in Flint’s water led to a far higher rate of fetal deaths and infertility, which the party of pro-life is content to ignore because privatizing water is a goal unto itself.

Or don’t read any of that! Have fun instead. Go play outside.

If you want one cheerful-ish read, the good people at Circle of Blue have an extensive report on how California’s Clean Water for All law is working. California was the first state to declare access to clean water a human right, and the impact that has had on distribution and sanitation has really borne fruit. Even during a drought, and even when water usage and distribution is a political football (see the surprising new block to the  Sacramento-San Joaquin Delta tunnel plan, which would have reengineered the state’s water supply), people in California are getting clean water.

That shows what happens when a government understands that water is for the people. It is a human right, a basic right, and our politics should be geared around ensuring that it works for everyone. It shouldn’t be based on figuring out who can profit from it.

But that’s not the GOP line. Everything should be sold. If it can be carved up, chopped up, and taken from people without political clout, it should be. Everything for profit. I swear to Moses, we’re about a year or two away from hearing Doocey say “Water isn’t a right, it’s a privilege!”

But the California experiment in basic decency serves as an elegant rebuttal to all that. So drink up, in whatever liquid you find fits a celebration. Even if things are dark, raise one up. Why not? Dark times call for good times. It’s the one light we have.

This is the last weekend of the year you are legally allowed to listen to this song.

I always want to do “Quick Hits” and such because I think they’ll be shorter, but they never are. Anyway, here are a few scatterings on some stories as well as things you should read, if you don’t have anything else going on during summer weekend, as summer blazes up once again to send us into the fall.

Let’s do this gossip column style.

END_OF_DOCUMENT_TOKEN_TO_BE_REPLACED

I support universal healthcare, though I don’t know anything about it. This makes me like most people! And while I think Bernie’s plan is a good one, like him, I also know it has no chance at success. For now. But I love that he keeps moving the conversation to the left, making it more and more normal. Why are we the only developed country where not dying in the streets because you’re poor is considered a privilege, and something to be earned?

Well, there are a lot of answers to that. But part of it, I think, can be found in this poll from The Guardian.

Since Sanders launched his presidential campaign in May 2015, public support for universal healthcare has climbed. Where 46% of the public supported such a system in 2008 and 2009, a recent Kaiser poll found 53% now support the idea.

But that same survey found that when respondents were told that a universal healthcare plan might give the government “too much control,” or that it might increases taxes, opposition spiked from 43% to 62% and 60% respectively – perhaps a sign of the major political and policy fights that lie ahead.

As always, The Simpsons summed it up beautifully in this one-minute clip.

“The finger thing means the taxes” might be my most-quoted line ever.

“But no one told us explicitly not to do this!”

Politico offers us another example of “terrible people who are stunned by how bad Trump really is” (we can also call this “The Mitchie”).

Publicly, petroleum companies and their trade groups are cheering Trump’s efforts to undo former President Barack Obama’s environmental regulations, including restrictions on fracking-related pollution, pipeline permits and offshore drilling. But quietly, people in the industry are growing worried that deregulation could backfire on them, according to interviews with a dozen executives, lobbyists, lawyers and analysts.

Among their fears: Laxer rules could set the stage for an environmental disaster like 2010’s BP oil spill in the Gulf, which blackened the industry’s reputation and spurred a regulatory clampdown.

“Every industry wants regulations that make sense, but you don’t need to roll things back so far that it opens an opportunity for outsiders to criticize, or something bad happens,” said Brian Youngberg, an energy analyst at the investment firm Edward Jones.

A person at one oil and gas company expressed similar worries. “It’s not helpful if regulations are streamlined so as to allow something to happen — say, a methane explosion or a spill — and we’d be painted with it as an entire industry,” said the person, who requested anonymity to speak freely.

Now, far be it from me to tell titans of industry what to do, but if you are worried about public reaction to you destroying the air and water, if not actually worried about destroying the air and water, maybe you could do more than the absolute minimum required of you by a government bound and determined to make every single corner the end of Wigan Pier?

But, I guess by untying their hands, Trump is truly binding them to their fate. What are you supposed to do, you know? Be marginally less profitable? And so it goes.

This post has like, zero politics, and is just discursive and recursive and indulgent ramblings, so feel free to skip.

This wasn’t tonight, but that’s what it looked like!

You set out on an eastward walk as darkness begins to stretch a light blanket over the sky and crickets warm up their chittering symphony.  You’d say it is still light out when you leave the door, but by the time you’re a few blocks away from the lake, where the air takes on a subtle sweetwater perspiration, cars have their lights on and faces are indistinct until they pass you, barely preceded by snatches of conversation.

“If there was going to be a rule about where to stand, there should have been a sign.”

You don’t know the signs or the rule, and you can’t help them with their space issues. The conversations are all couples right now, older than you, settled in, comfortable in the minutia of their observations. Relaxed and unhurried as they disappear into the strengthening night. But you’re unsettled.

END_OF_DOCUMENT_TOKEN_TO_BE_REPLACED 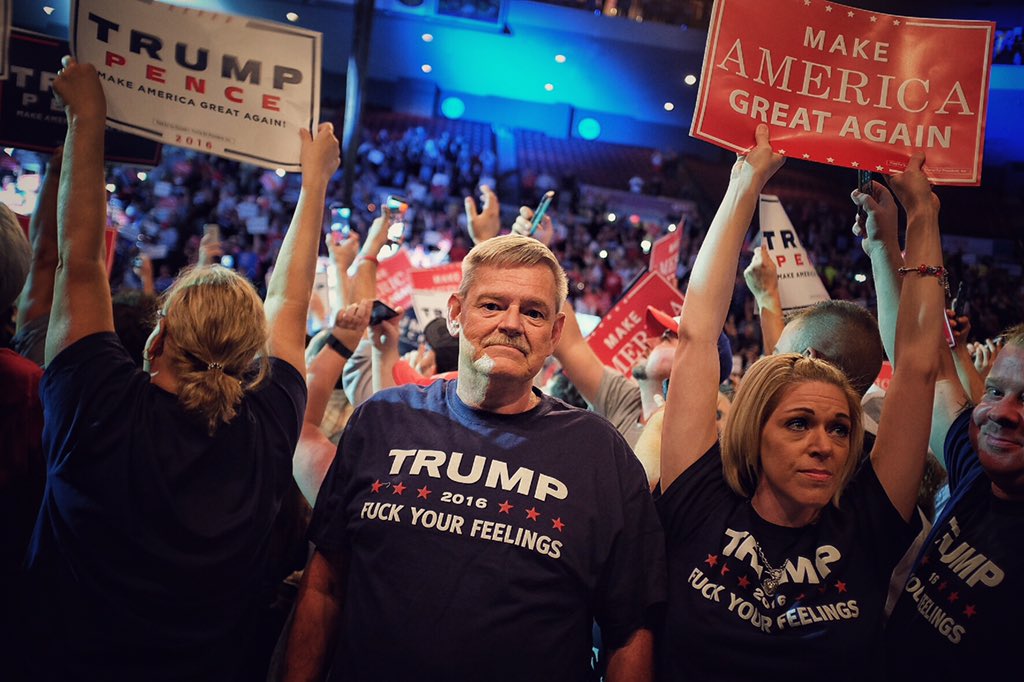 “A president who I think came into the office thinking he would focus on domestic issues — ‘make America great again’ — has learned that you inherit the world and its problems when you’re president of the United States,” Coats told the Post.

“One time he came in and said, ‘All right, what’s the bad news this morning?’ ” he continued. “You can see the weight of the burden on the shoulders of the president.”

The “one time he vaguely asked about things!” standard is not, traditionally, presidential.

James Comey better hope that there are no "tapes" of our conversations before he starts leaking to the press!

It is good to know that Spicer talked to the President (who, remember, is Donald Trump) before meeting with reporters. I am sure that was a good conversation.
SPICER walks into the Oval Office, sees no one is in it except for Mike Pence, grinning broadly, and walks into the annex, where POTUS TRUMP is watching 11 TVs. MNUCHIN is in the corner.
SPICER: Hey boss, just thought I’d ask real quick before today’s press briefing about the Comey thing.
POTUS TRUMP: Tell them that what Don Lemon said was stupid. Tell them it was disgusting and also that a lot of people say my relationship with Xi is very very good. I think he really likes me, and so why are we talking about currency manipulation? I stopped it, ok?
MNUCHIN: You sure did!
SPICER: Yes, of course, we’ll make sure to get that all out. I can’t wait for Lemon to hear it!
(everyone gives each other thumbs-up for 45 seconds)
SPICER: OK, but, they are probably going to ask if there actually are, you know tapes?
POTUS TRUMP: Who’s talking about tapes? All I said was that there might be tapes, in quotes, and the quotes are very important but the Fake News is always like ‘oh, Trump said tapes’, but they never talk about the quotes, and they never mention Trump’s quotes.
SPICER: OK, so, there aren’t tapes then?
POTUS TRUMP: Who knows? I just said he better hope there aren’t, because if there are, he wouldn’t want to talk, because that wouldn’t be nice. It would be really nasty.
SPICER: So, it obviously wasn’t a threat. It’s just a fact that he should hope no one tapes him.
POTUS TRUMP: Of course it wasn’t a threat. He might say stuff, because he’s very disloyal, you know, and I am never the one who brought up loyalty, and now I hear, oh Tump, he wants loyalty, but I only want people who are loyal enough to fire people who aren’t. Tell them that. You look taller today. Did you see what Rosie said?
SPICER: About Comey?
POTUS TRUMP: No.
(11 minutes of silence)
Spicer: So, nothing furth–
POTUS TRUMP: That commercial didn’t have me in it!
SPICER (exits)
by Brian O'Neill 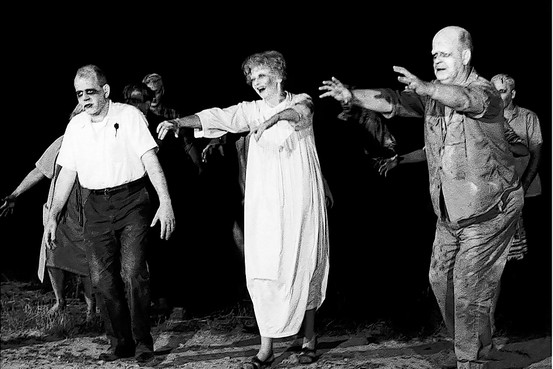 Our good buddy Alec has a modest proposal for what makes the GOP so cruel. It could be simply epidemiology…

Unfortunately, the cure does not lie in a typical antithesis like being loved: instead this only irritates the synapses of dendrites most effected by prolonged effects of being infected.