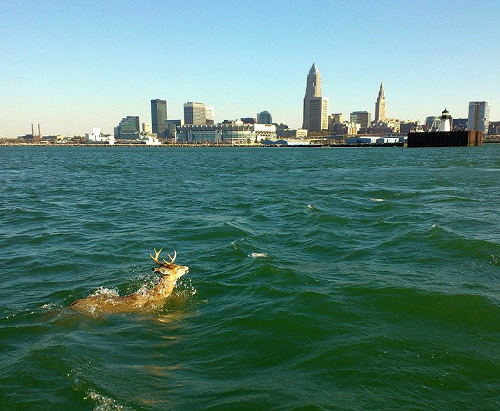 I’m sure there’s a metaphor here somewhere, but my first thought is: whoa! A deer in Lake Erie? What the hell? Image (and explanation) from Cleveland Scene

A quick rundown of some top water stories, which remind us that while we can impact nature, we’re really not in charge.

I realize that there is a weird-seeming contradiction in saying that we can bring great change to nature, but that we’re still at its mercy. But when we say “great change”, we don’t mean permanent. The earth will eventually repair itself, and time will smooth over our cataclysms. We just won’t be here. But you want the real image? Imagine a 7-yr-old jamming a hatpin into his mother’s ankle. He can do that, and cause great damage, but really, the storm will redound upon him.

So let’s start this week’s “hey, who cares about clean water?” news with Wisconsin.

The invaluable journalists at Circle of Blue have a look at how Wisconsin’s groundwater is increasingly drying out, and where it isn’t, is being rendered undrinkable by pollution. For those readers who have never been to Wisconsin, well, it isn’t exactly Arizona. It’s full of lakes and rivers, and flanked on two sides by Great Lakes. The idea that its water could be in trouble isn’t a natural one. And, of course, it is a result of decisions made largely by Scott Walker.

This isn’t surprising. Walker’s entire tenure, when he isn’t busting anarchist retired schoolteachers, has been to sell the store to industrial and agricultural interests, at the expense of the environment (which means selling out hunters, fishers, sportsmen, campers, tourists, and everyone else who has any reason to go to Wisconsin).

Nowhere is this more clear than in his Department of Natural Resources, which he’s gutted and filled with cronies and industry oxpeckers. He’s had it reduced to being the fetchservant of extraction and the state’s leading climate denier. It’s been essentially privatized, and it shows, and the doddering legislature has no interest in changing it. And it shows.

Born and others point to a May 2016 ruling by the attorney general’s office as evidence of state backsliding on promises to address high-capacity wells. The attorney general said that the Department of Natural Resources does not have the legal authority to consider the cumulative effect of wells on groundwater resources when approving new drilling. The DNR adopted that position in June.

(italics and bold added by me to subtly point out the insanity, because: how does the Department of Natural Resources not have the authority to study water?-brian)

New wells are evaluated individually despite falling lake levels being a collective problem stemming from too many straws in the ground. The ruling “denied hydrogeology,” Born said. The Legislature could grant the DNR the authority to do comprehensive well assessments, but lawmakers failed to do so last year.

Yeah, why do so? The Circle of Blue articles stands this in contrast to Minnesota, whose human governor Mark Dayton has “called for 2017 to be a year, during which we all pay special attention to the quality of our state’s water, which most of us assume we can take for granted”, and backed it up with an aggressive clean water agenda.

Who is in charge impacts our lives in a million ways, especially at the local levels. Maybe one day the people who voted for Walker time and time again will see their wells being polluted and running dry, see extraction straws popping up like a new orcish Northwoods, and might see that voting, as we say, has consequences.

The EPA and the “Clean Air and Water” Scam

Which brings us, inevitably, to the consequences of the electoral college victory of Donald Trump. In his speech yesterday, Trump pledged to protect “clean air and water”, but one should remember that he is an incredible liar who will say anything at any time to get applause. It’s clear that he has no interest in doing so, and was made clear immediately after the election, when he nominated Scott Pruitt to be head of the EPA.

Pruitt, as we know from emails and from his entire life, which is equally pointless and small and hugely destructive, makes the oxpeckers in Walker’s DNR look like amateurs. He cheerfully does the bidding of industry, right down to cutting and pasting their words onto lawsuits and orders. Needless to say, this didn’t stop his confirmation.

In his “condescending and hypocritical” speech to his new employees (note: not his interpretation), he pledged that the department would do more to protect “clean air and water” and not spend so much time on climate change. You’ll notice that echoes Trump’s words. That’s the scam, folks. It’s pretending the two are radically different things, and that the things that create climate change aren’t also impacting our air and water, and that climate change itself won’t continue to do so. This way they can spin it as “we care about the actual environment, and not the climate change special interest billionaire scientists.”

But even granting that dodge, they have zero interest in actually protecting air and water. That’s obvious. It’s obvious in his actions, which are rolling back EPA authority and reversing protections, expanding pipelines, and making water less safe. It’s how their con is going to work: saying that they are clear-eyed about being non-political like the climate folks, while making the environment worse on all counts. Of all the disasters of Trumpism, this might be the worst.

How bad? It could destroy a Great Lake.

Lake Erie and the EPA

Lake Erie is the smallest of the Great Lakes, but brother, it’s still really big. Like, if you could skip a stone across it, you’d immediately be named the new god-king of earth. It’s just that big! But it is still relatively small, and narrow (though long), and of all the Great Lakes, it is the most industrialized. It’s also a great example of how humans can impact even something as huge and terrifying as Lake Erie.

We all know about the Cuyahoga catching on fire, but forget that river dumped into Lake Erie. As did the waste of Buffalo, Akron, Sandusky, Erie, and all the industrial towns along its southern (and northern) shores. It’s why the lake was considered “dead” in the 60s and 70s, and why it has been struggling to come back ever since. Its fish are intermittently safe to eat, and industrial runoff causes huge, choking algae blooms which poison the wildlife.

As the folks at Cleveland Scene Weekly remind us, that’s why the EPA matters. Regulations brought the Lake back from the brink of extinction, to the point where it is tenuously safe for now. But destroying regulations will destroy it again, because, contra Pruitt, industries won’t regulate themselves. As they say, “if we lose the EPA, we lose Lake Erie.”

Now, to answer a quick objection (including ones found in the comment section): no. We won’t lose Lake Erie. It will still be there. It will still lap wave after wave, eating the soft shore and changing the land as does no other lake. It will have its sunny days and its sudden roiling tempests. But it will also be poisoned and dead and undrinkable and why do we even have to point out why that’s bad? It’s like bringing down a rockslide onto your house and with one last smug breath pointing out that you didn’t blow up the whole mountain.

But also, don’t think that the Great Lakes are absolutely permanent. Erie, after all, is smaller than the Aral Sea. Or, was smaller. It now dwarfs that disappeared giant, a lake destroyed by man.

Finally: El Nino and Climate Change, or; You Don’t Get To Choose

So it looks like there is an increasing, 50% chance of El Nino this year, that has brought drought to some areas and unbelievable flooding to other places. I’ve noticed that there is a little game on the right that puts El Nino in opposition to climate change. There are two arguments.

One, that El Nino can reverse the impacts of climate change, by bringing a lot of water to California. This is shortsighted, and implies that nature just cleans up our messes, and so is essentially escapist. The other is that what we consider climate change is probably just an El Nino cycle.

But here’s the thing with that argument: it takes for granted that El Nino is a real phenomenon. And it is! It’s very real. (And probably exacerbated by climate change, but that’s neither here nor there). But it is interesting that the same people who deny climate change, and who actually say that the scientists are lying, are so quick to point to El Nino as their proof.

This is weird because El Nino was discovered and figured out by climatologists, hydrologists, oceanologists, and other scientists; indeed, the same people who talk about climate change. I’m sure there is a lot of individual overlap, but there are clearly not two separate camps. To “believe” in El Nino but not climate change is to say that a group of scientists figured out this immense, globe-changing phenomenon and are telling the truth about it, but lying about the other thing. Uniformly. As, essentially, one voice.

Remember this the next time Ted Cruz sneers that “Climate change isn’t science, it’s religion,” and then punch him in the goddamn mouth.