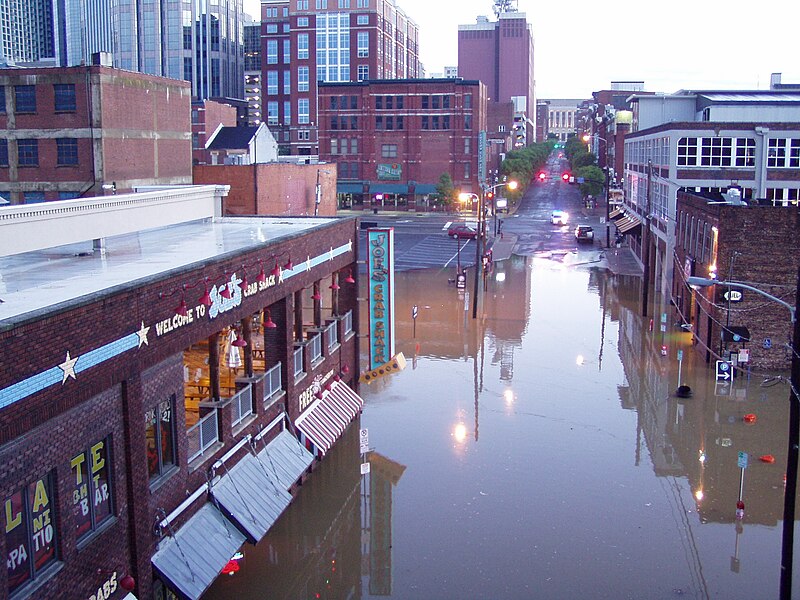 Very few cities were imagined and conceived in one (relatively) fell swoop. Sure, there were some that were built with the whole spread of the city imagined and engineered, but those are few in number and tend to turn out Weird, like the inhuman scale of Brasilia or the strange half-peasant-kitsch and half Nazarbayev-infected megalomania of Astana.

But despite the feverish pitches of cigar-chomping boosters, most cities tend to grow like we do: an odd accumulation of growth spurts and injuries, new experiences being tacked on to dim memories, aging at odd angles, sprinting or stooping with little rhyme or reason. And so they grow up strange, careful grids intersected maddeningly by old angled trails or riverine circumnavigations.

Because of this ad-hoc nature, any attempts to change them take titantic efforts. The act of reimagining a city is usually just that: an act of imagination, never quite realized.

We were reminded of that yesterday when Nashville, one of America’s most happening cities, tried to pass a hugely ambitious referendum that would have created a vast new public transit system, complete with light rail, express bus lanes, and more.

Voters in Nashville rejected a sweeping transit plan on Tuesday night by an overwhelming margin. The plan’s supporters got trounced. In the end, residents voted it down by a 2-to-1 margin.

Had it passed, Let’s Move Nashville—the boldest municipal transit plan in recent memory—would have launched five light-rail lines, one downtown tunnel, four bus rapid transit lines, four new crosstown buses, and more than a dozen transit centers around the city. Depending on how you do the math, the scheme would have cost $5.4 billion or more like $9 billion, funded by a raft of boosted local taxes. More than 44,000 voters across Metro Nashville’s Davidson County came out in favor of the referendum, with more than 79,000 voting against it.

So that’s certainly not great, if you like public transportation and want to get away from our choking reliance on cars. It certainly is a resounding defeat. It happened, according to smart observers (like the article linked to above) for a variety of reasons, some specific to Nashville and its immediate politics, and some that are more national, troubling, endemic, and entrenched.

Maybe the most cited reason that I’ve seen is that the project’s biggest booster, former mayor Megan Barry, is very recently and spectacularly former.

Nashville’s charismatic mayor, Megan Barry, resignedon Tuesday, after a sex scandal that had been simmering for weeks boiled over into charges of corruption. When she admitted in January to an extramarital affair with Robert Forrest, the now-retired police sergeant who headed up her security detail, a local district attorney asked the Tennessee Bureau of Investigation to discover whether the mayor’s conduct broke any laws. Barry pled guilty to felony theft after it came to light that Forrest had earned $170,000 in overtime since the start of Barry’s tenure—including overtime for nine trips last year in which he accompanied the mayor alone.

This was less than two months ago. And while it is possible to separate the benefits of this plan from the tawdry behavior of its booster (not its dreamer or engineer or anything), it is understandable why that poisoned the well. It’s hard to ask for massive tax dollars when you’re spending some of them on your paramour. Even if that isn’t totally logical, there is ironclad laws of politics that make it so.

(Note: these laws don’t matter to a President who is flagrantly, nakedly corrupt. His “protect the taxpayer!” party doesn’t really seem to care. But we move on…)

It is taxes, of course, which are the universal sticking point for any grand plan. It is very easy for an opponent of a transformational plan to rub his fingers together, imitating money. To wit:

“The finger thing means the taxes.”

This is especially true for the Nashville referendum, which wasn’t able to be sold directly as “your taxes for your future.” The referendum, as you read above, went across Nashville’s metro area, through Davidson County. And the transit plan manifestly did not. 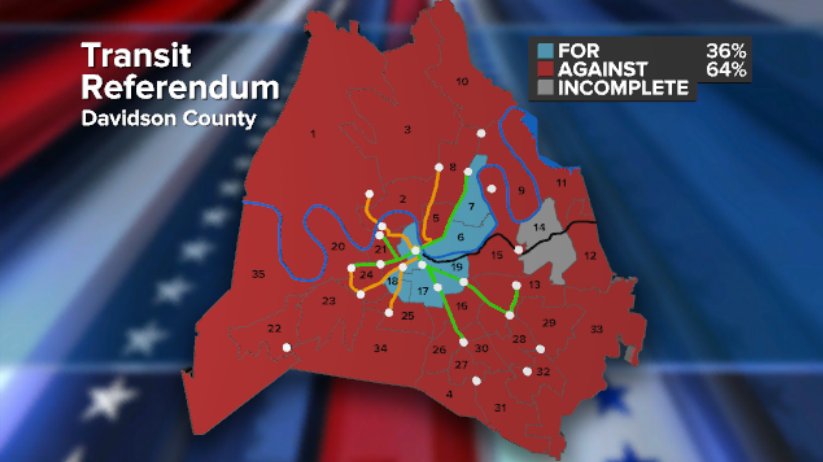 The center of town, which would benefit most, approved. The surrounding areas, which wouldn’t get immediate benefits, did not. Even areas with routes went against it. Which, again, might not be logical, but makes sense.

Of course, as you probably imagined, this didn’t happen in a vacuum. There were surprisingly powerful forces aligned against the referendum, including, maybe surprisingly, the Koch Brothers. The formed PACs and poured in money to convince people that this was a boondoggle that would bankrupt them personally.

Their campaigns were as much about our idiotic culture wars as about fiscal responsibility. A buncha big-city elites want to take your money and spend it on some fruity light-rail. That’s not at all acceptable.

Here you might ask why the Koch Brothers were involved at all, Nashville not being their home in Texas or Oklahoma or the Bardo or wherever. Well, I’d huffily remind you that in 2015 they also intervened to stop an expansion of rapid bus lines in Nashville, which would have eased traffic.

To which you’d respond: ok, that’s sinister, but doesn’t answer the question of why.

Well, that’s hard to say definitively, as secretive as they are. They don’t email out evilplans.pdf to the media. But it is pretty well-known that their interests lie mainly in fossil fuels. Rapid transit, including light rail, will hurt fossil fuels. Anything that lessens the dependence on cars hurts them, which is sort of ridiculous to say, since nothing can actually hurt them. Let’s just say it will hamper their ability to earn even more money.

So we can’t have that! In this, one is reminded of auto companies conspiring with the oil and rubber industry to destroy trolley cars in LA (the plot of Who Framed Roger Rabbit). Most of us know that story, but the truth is, it really wasn’t a conspiracy. There was undoubtedly shady stuff going on, but it was normal lobbying and above-the-board vote-buying. In the service of their own smoggish and carcinogenic interests, sure, but they were able to do it mostly legally.

And that’s what going on here. There is nothing that stops the Kochs from reaching a louche and scaly claw over to past the Mississippi, and targetting Nashville as a proving ground for their anti-environment machinations, which are just a means to more wealth and power.

It helps that they are aided in this by decades of anti-tax propaganda and the idea that the common interest is somehow anti-American. They are aided by our culture wars. They are aided by laws in their favor that let them spend what they want to stoke this anger, and destroy a plan that would have benefitted nearly everyone.

These are huge, literally choking forces that urban transformation goes up against. If the trolley system is mismanaged, capital wins. If a mayor has an eye for a dapper cop and books him some well-compensated overtime, capital wins. The logic of the market, the enormous advantage that wealth has in this country, means anyone trying to make a change has to be perfect.

It’s going to take a long time to break this spell. We might not have it. But it doesn’t mean we should ever stop fighting for it.