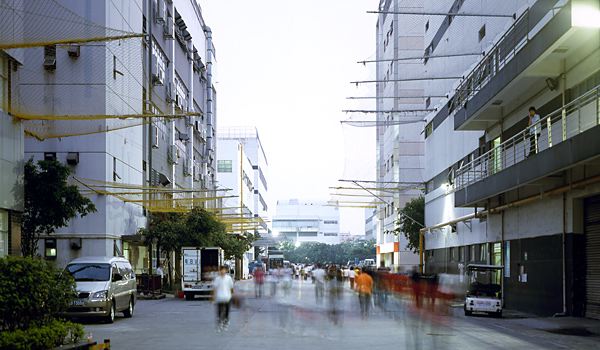 So, last week it was announced that Foxconn, which builds stuff for Apple when its employees aren’t killing themselves in China, was opening a plant right in Wisconsin’s 1st District, home of Paul Ryan. This was sort of a win for Trump, who is bringing back manufacturing, etc, and presented as a very good thing for Wisconsin workers.

This is a $10 billion investment, and it could actually go higher if you listen to the President.

President Donald Trump, who has suggested the deal would not have happened without his efforts, said he was told by Foxconn Chairman Terry Gou that the investment could be larger than $10 billion.

“He told me off the record, he thinks he may go to $30 billion,” Trump said at a small business event at the White House on Tuesday of Foxconn’s investment.

“I promised I wouldn’t tell,” Trump said to laughter.

Now, based on track record, this conversation almost certainly didn’t happen. We don’t expect Donald Trump to tell the truth. But still, $10 billion is a lot, and there could be thousands of jobs, both in the plant and in the auxiliary trades.

(There is also a great little part in Reuters: “Trump praised Foxconn chairman Terry Gou at a White House event, asserting: ‘If I didn’t get elected, he definitely wouldn’t be spending $10 billion … This is a great day for America.'” That’s…not praising Gou.)

Now, to be sure, there have been some caveats. For example, a lot of that $10 billion could be spent on automation. Gou wants to have 1 million robots “working” for his factories over the next decade. It will be looking for “automation savvy workers”, which doesn’t always mean the people in Janesville who lost jobs. With retraining, it might. And if Wisconsin invests in such programs, it could create jobs for the state.

But that means money, and all this Foxconn largesse doesn’t come cheap. For example, the state is giving Foxconn $3 billion in tax breaks. And there is some more. As the Journal-Sentinal puts it:

In return for building an industrial campus that could employ as many as 10,000 people in Wisconsin, Foxconn Technology Group almost surely will expect subsidies, tax breaks, job retraining promises, infrastructure improvements and other government incentives.

And it will expect them on a scale that by traditional standards would be staggering.

“They do this everywhere they go,” said Einar Tangen, a Beijing-based Chinese economic expert, echoing the views of many Asian experts. “They extract everything they can.”

They’re not kidding, either. One of the provisions in the bill to lure Foxconn in is fewer protections for the wetlands.

Environmental groups, including Midwest Environmental Advocates and the Wisconsin League of Conservation Voters, said the state’s proposal rolls back protections for wetlands, which act as natural filters for drinking water and wildlife habitats, and protect against flooding…

This is not great. But it is a perfect encapsulation of the Trump/Ryan/Walker anti-worker and anti-environmental plan.

Let’s review what we have here. A decimated industrial workforce building a factory for high-tech workers who don’t, at all, have to come from the area. They can move there from anywhere (and a recent theme of the President has been people moving to Wisconsin). An anti-environmental race to the bottom where workers move from state to state depending on which lowers restrictions enough to get medium-to-low paying jobs. This is another theme of Trump, who emphasized as much in a lunatic pre-inauguration press conference.

It’s to create some jobs, yeah, but to remove any power workers might have. To make them fight over scraps. To have states compete against each other to be “pro-business”. You want us to keep our factory here? Well then get rid of child labor laws.

It isn’t a coincidence this is being built in Wisconsin. Walker has made it the petri dish of right-wing jobs’ programs, in which the workers are reduced to disposable numbers and any idea of duty to the community is laughably archaic. He loves overturning regulations in order to attract “jobs”, because that’s how people get turned into capital. And that is his driving motivation.

It’s Trump’s, too. All his talk of the white working class was, like everything else, a lie. The plant will be good for people in the short-term, maybe. And the environmentalists will be painted as inhibiting jobs, anti-worker, etc. It’s part of the long-running war to separate the two groups, a false choice proposed by greedy management. This is the new America. Looks a lot like the old one.

3 thoughts on “Foxconn’s Wisconsin Plant Bad for Wetlands and Workers; Another Demonstration of the Race to the Bottom”