At one point last year, I think shortly before the inauguration that wrenched us across the border into this absurd and terrifying period, I woke up with a palimpsest of thoughts, the first a video-like replay of the moment during the debate where Hillary Clinton accused then-reality-star Trump of being a Russian puppet.

If you remember, he leaned into the mic and said, “No puppet. No puppet. You’re the puppet.” At the time, we all knew there was something hinky going on with Russia, but the next layer of thought in that morning black wasn’t about his deflecting the truth, but the artless and childish and idiotic way in which he did it. There was a moment of disconnect for me, where I thought how amazing it was that someone so dumb could come close to the Presidency. And even as that thought flickered through my gauzy dawnish brain, the horrible truth of what happened next came roaring like an unstoppable train.

For me, that is one of the worst parts of this horrible period, where the Republican Party is going all in on undermining every one of our institutions, subverting the rule of law in order to protect one man. It’s not just that they are breaking our democracy, it is that they are breaking our democracy for this schlub, for this witless dummy and his graspingly moronic children.

But that’s just for me. I have the luxury of having semi-removed despair. For those on the spear-end of racial authoritarianism, there is no remove. For those who are being ripped from their country and torn apart from their familes, or who are in the crosshairs of a new push toward massive incarceration, there is no distance.

In their incredible and powerful new book, How Democracies Die, Steven Livitsky and Daniel Ziblatt outline the ways in which democracies can be eroded from within, slowly and then very quickly. They talk about the way in which norms are ignored, and more importantly, how allies give up any pretense of democratic leanings in order to protect their primary representative, whether that is Hugo Chavez or Donald Trump.

The cover isn’t subtle, but then, neither is what is happening.

But most importantly, in the American context, they put into stark relief how central a role race and racism play in our democracy. They make the now-obvious but to me unremarked upon point that post-Civil War, democratic comity was dependent upon both parties agreeing to ignore civil rights.

It was only when the moral force of that issue was no longer ignorable, thanks to the bravery of the activists, the cruelty of the perpetrators, and the unrelenting and unmistakeable humanity of those ground under Jim Crow’s footsteps, that movement was made. And once the Democrats shook off their racist roots and became the party of Civil Rights, and the GOP became the home of apartheid, that our norms started fraying.

In this accelerated period, we see it in stark relief. Really, we see both sides. For people like me, protected from the worst by race and class and circumstance, the sudden capsizing of our democracy is playing out as farce. For those who are paying with their lives for the Republican reliance on racial animosity, it is tragedy.

The two sides are connected. If we really want to understand what is happening here, we have to look at both sides.

The End of Democracy As Farce: Giving In To The Worst People

One of the more minor irritations of the Trump era, as the Republican Party quickly adapts to latent authoritarianism and their dream of anti-democratic rule, is just how tacky and shabby and unliterary the whole thing is.

I mean, when (if) you imagined the American experiment coming to a halt, as we stripped apart our democracy and sold it piecemeal at the whims of a strongman, you probably expected someone, well, strong. Or someone with actual charisma. Someone who could stir the soul of man by making his bile seem patriotic and even historic. You probably didn’t imagine that it would be, well, this guy.

Vanity Fair, which looks like it is on its last legs, is bending over backwards in apologizing for the minor hit they took at Crooked H. Anna Wintour, who was all set to be Amb to Court of St James’s & a big fundraiser for CH, is beside herself in grief & begging for forgiveness!

It’s frustrating and gross and embarrassing, a perfect reflection of our addiction to fake drama, enhanced reality, and fifth-tier wrestling storylines. The President is, at the end of the day, a messy drama queen who loves media backbiting. That’s who he is.

It’s irritating in that is is sloppily anti-climatic, right? Whenever I would think of tyranny, Auden’s Epitath on a Tyrant sprung predictably and unoriginally to mind.

Perfection, of a kind, was what he was after,
And the poetry he invented was easy to understand;
He knew human folly like the back of his hand,
And was greatly interested in armies and fleets;
When he laughed, respectable senators burst with laughter,
And when he cried the little children died in the streets.

Does that fit Trump? Maybe the fifth line, and I guess the fourth, although his obsession with the military is even more infantile than most tinpot dictator’s childish obsessions. I suppose he knows human folly, or at least he has a gut-level understanding of how to exploit our hunger for bullshit. But so do a lot of people.

Even worse, I think, is when you really want to go full melodrama, bust out some Yeats, worry about the end of our era. It’s one of the most famous lines in 20th-century poetry, from The Second Coming.

The best lack all conviction, while the worst
Are full of passionate intensity.

I guess Ryan and Mitch are intense about breaking the idea of the common good, and the super-racists are really excited about getting read of Mexers. The alt-right is pretty jazzed, sure.

But Trump? He’s almost comically lazy, a gluttonous oaf who has to be physically dragged from the TV. He’s only intense about getting the idiots at Fox and Friends to say nice things about him. He’s slouching somewhere, but only toward the couch, to be briefly less bored with his own empty existence.

In a way, this feels almost deserved: we have Real Housewives leering at us from every magazine stand; we deserve a grubby schlub of a tyrant. But it also makes it doubly frustrating to endure.

We’ve reached very quickly the tipping point of this drama. As the Russia investigation gets closer and closer to the President, the Republican Party has gone all in on protecting him, including the all-but-certain release of the inflammatory nonsense that is the Nunes Memo.

There’s no need to go into the details, here. The Nunes Memo is selectively releasing classified information in order to undermine the Mueller Investigation, not factually, but to raise the temperature in the Lair of the Howling Monkeys enough to give Trump cover to get rid of the investigators. Or, in the best case, for the Republicans to claim that whatever comes from Mueller is irrevocably tainted, because the FBI is a hotbed of corrupt liberalism.

Paul Ryan is all-in on this theory, even as he pretends to be thoughtful about it, as is his caucus. Mitch McConnell is scarcely better. And remember: this is to protect a guy who, in all likelihood,  bent over backward to Russia because he need to keep laundering their money to pay for his phony business and faux-wealthy lifestyle. 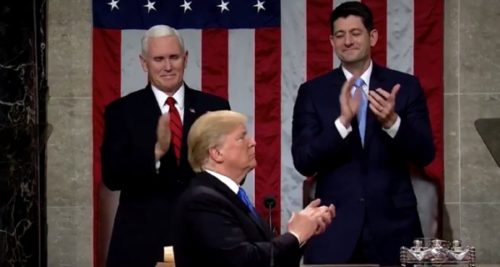 This adoring look should be imposed on his tombstone until the end of time.

Want the one-sentence brief about what is happening here?

We’re watching the minority party completely subvert our democracy in order to protect America’s dimmest citizen, who, because he is in hock to our global enemy, shields them from facing consequences for undermining our elections.

This is a farce; that it is also a tragedy makes it no less ridiculous. But subverting democracy has been their plan all along. Maybe they needed a schlubby tyrant-wannabe to make it happen. Maybe they needed someone whose vanity and emptiness would serve as a vessel for their anti-democratic leanings.

That’s what they have in Trump. But they also have something equally, if not more important: someone willing to completely weaponize racism.

The Brutality At Democracy’s End

I’ll admit to being somewhat taken aback by Levitsky and Ziblatt’s matter-of-fact assertion that it was shared racism which led to decades of democratic respect I took for granted. Not shocked of course that racism underpinned and distorted everything in this country. That’s clear. But shocked how muchwe relied on instituionalized racism to function.

One thing this blog has long argued is that America is essentially and increasingly ungovernable. That we’re too far apart, too big, and too atomized to really function as a democracy. That there is a howling madness clawing up from the violence soaked into the soil, and that we’ve never dealt with the blood of the lash, the violence of slavery and its enduring legacy, or the nations we ravaged to become continental.

I thought these factors were driving us apart and ruining our democracy. And in a way, of course they are. But what How Democracies Die made clear is that it was ignoring these issues, it was taking race off the table, it was subverting the reality of our history into myth, that made America possible.

And once one party took tentative, incomplete, and always-uncertain steps into facing those facts, and the other took in everyone for whom those facts represented an insult and a threat, that we went down the road that led us here.

(TJ Stiles does a great job of illuminating this road, and of course the corpus of Ta-Naheisi Coates does so in inarugable detail.)

That inherent racism had to go somewhere, and it has been increasingly weaponized by the GOP in order to protect themselves in the face of electoral irrelevance. We see it in the gerrymandering that, while Both Parties Do It, has allowed the GOP to win statehouses and federal seats even while getting dramatically outvoted. We see it in the comic opera in North Carolina, whose Republican legislature stripped the incoming Democratic governor of his powers out of pique. We see it in the ongoing destruction of unions.

But most of all, we see it explicitly directed at Hispanics and blacks, and immigrants in general.

Every day brings new horror stories of ICE tearing apart familes, throwing out people who have lived here for decades, who have served their country, who are pillars of their community. Or who are just regular people, human beings with life. ICE and Border Patrol are turning into lawless police forces, guided only by Trump’s racist blessings.

They just deported a Palestinian man who has been living here for 39 years, in explicit defiance of a Congressional act, simply because they know there will be no consequences.

ICE and Border are Trump’s racist police force, the gun-barrel of his essential meaning. The GOP, long the party of establishing minority control, see this as their only chance, and are willing to sell out the country to foreign powers not despite their undermining our elections, but because of it. And a grubby money-launderer with no sense of decency, with no center other than his own empty vanity, is in the middle of it.

That he’s key to our decline is pure tragic comedy. We’ve been moving this way for hundreds of years, accelerated in the vapidity of our media age. And now its come to bear. It is no exaggeration to say that the 2018 elections are our last real chance. The fear is that they may not be enough.