One of the primary projects of this blog has been to analyze America as a normal country beholden to the normal rules of history and demographics, and not an exception to everything (while still of course understood as filtered through a specific context, as you must for everywhere). Part of this has been the now-fairly-common trope of understanding America from the outside, in a “how would they cover it?” sense. 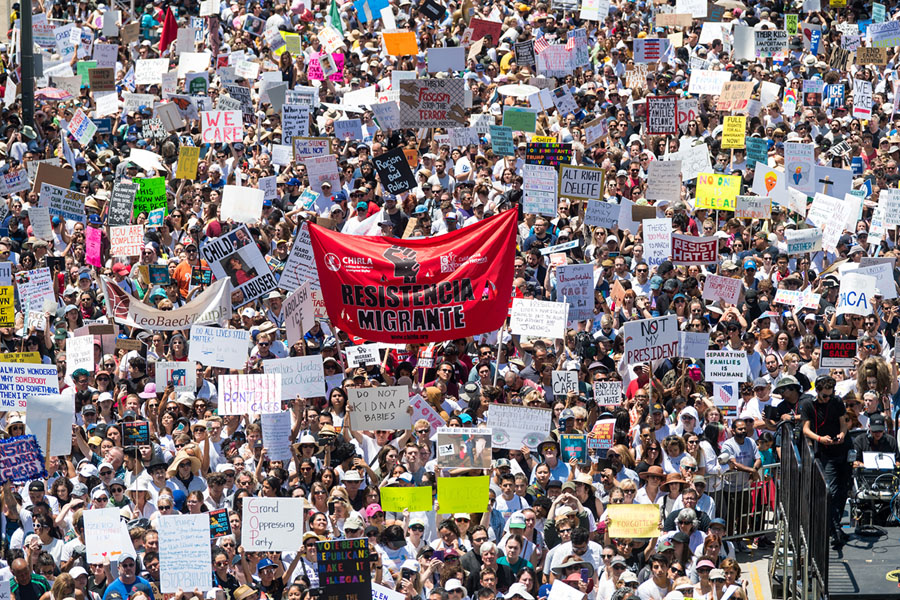 Yes, the ostensible point of Saturday’s #KeepFamiliesTogether march was to protest the family separation policy and its cruel aftermath (which includes charging migrant families thousands of dollars to get their children back). But more broadly, it was about Trump’s immigration policies in general, and, with a roiling undercurrent, a call to abolish ICE.

What started as a fringe movement has now gained steam, with major politicians like Kristin Gillibrand and Elizabeth Warren joining upstarts like Alexandria Ocasio-Cortez in saying that ICE should be abolished. The right and Thoughtful Centrists are calling it political suicide, but there is a very strong case to be made.

The Democrats are making a strong push to abolish ICE, one of the smartest, toughest and most spirited law enforcement groups of men and women that I have ever seen. I have watched ICE liberate towns from the grasp of MS-13 & clean out the toughest of situations. They are great!

And so this is kind of the point. Trump (and many of his supporters) love ICE precisely because they are Trump’s spear point of ethno-nationalism. They are an increasingly unencumbered police force in an ever-expanding Constitution-free zone who seem to answer (and be entirely aligned with) the white nationalist political goals of Trump and his movement.

Trump’s calls to end due process and for instant deportation aren’t in a vacuum, or entirely because he doesn’t understand/doesn’t care how the law works (although there is that, too). They are genuine, and genuinely scary, because if ICE can deport anyone who can’t prove their citizenship, who couldn’t they deport. Could you prove yours?

This seems like a lurid fantasy, sure, but what impossible things have happened in the last year? We’re now a nation that gleefully deports people who have been here for decades, and that rips apart families even when they apply for asylum at legitimate entry ports. A lot of Trump’s Tweeted ramblings have eventually morphed into policy.

That’s why I think these protests were different. They weren’t just about a specific policy, even if that was the stated point. They were against ICE, and against Trump’s abuse of state power, and against the idea of an unchecked force working in tandem with a single political figure.

These weren’t against law and order. They were for law and order, and against creeping authoritarianism. More than any other marches, that hot Saturday was the first one that was pushing back against the changing American state in a very real way, in a way we’ve seen in Russia and Hungary and Turkey.

Those marches were crushed, eventually. These weren’t. Maybe that’s because America is actually different, or maybe this is the deep breath before the crackdown. It was hot on Saturday, but I think it is going to get much hotter. And we’re all going to have to decide if we are out on the streets or in our homes.