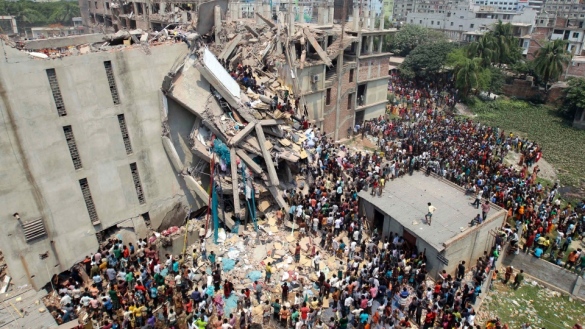 Pictured: not actually needed for the global economy to work. Image from ctv.com

One strange thing about staunch free-market advocates– who in self-image are as clear-headed about the real world as they are stout-hearted– is the mystical attachment to the lack of human agency in a human endeavor. The mystery of the market, and the “invisible hand”, is essentially the Gaia to their cute girl at the co-op. When global labor problems, and the immiseration of the Third World, is brought up, you’ll find shrugged shoulders and mumbling incantations about market forces. It’s strange to think that an economy predicated on container ships nearly a quarter-mile long and capable of carrying tens of thousands of tons, that can be unloaded by robots in massive ports, is somehow beyond the reach of human intervention.

There’s a growing movement to change that. It’s really easy to be upset when a Bangladesh factory collapses, or when you hear about union organizers for a South American sweatshop being killed, or any other of the iniquities of the global economy, but it turns out there is actually something that can be done. The invisible hand, shockingly, in attached to our arms.

Just as we have passed laws in this country that stop child labor, allow for organizing, and create working conditions that, in theory, allow you to live, we can do so for other countries. Obviously not directly, but by enforcing supply chain standards for the American and other Western businesses that use overseas factories. Over at Lawyers, Guns, and Money, Eric Loomis gives an outline of what this might look like (with a promise to delve deeper into it in the future).

1) All workers have the right to a union or workplace organization of their choice, free from harassment by employers or from corporations higher on the supply chain.

2) All workers have the right to a safe workplace.

3) All workers have the right to be free from physical, sexual, and verbal abuse.

4) All workers have the right to a livable wage based on local conditions.

6) Western companies must take legal responsibility for the conditions in their supply chains. Western countries need to pass legislation ensuring this.

7) Western companies must agree to legally binding codes around pollution in their supply chains.

8) Corporations must take legal responsibility to eliminate all child labor, prison labor, and coerced labor in their supply chains.

9) Workers in supply chains must have legal recourse to violations of the basic principles listed above. If that cannot happen in the courts of their home nations, it must happen within the home courts of the western companies. That legal recourse should include access to corporate information and include the possibility for financial compensation for suffering.

10) These laws and regulations must travel with companies, so that they cannot escape national law in order to create a race to the bottom. Rather, the new legal regime follows the company wherever it operates.

To me, these seem like a no-brainer, and I think the political arguments against them won’t hold much water. Let’s look at a few of those.

I don’t think it will be easy, nor do I think it will create an international brotherhood, and nor do I think that we’ll see the glory days of the labor movement come roaring back. But it is, in many ways, a simple fix to the deep cruelty of the global economy, both here and abroad. A very comlicated and time-consuming one, and a long batle, but one that this nascent progressive coalition can fight, by rallying a large and diverse group of activists, from anti-globalization turtle-huggers (whom I love) to the bluest of the blue collar. It’s a winning issue.