I mentioned earlier today that Trump responded to Hillary Clinton saying he had thin skin by immediately huffing that he had the opposite of thin skin, which is of course what someone who is totally secure and unflappable would do. In an interview with Jake Tapper today, notable mostly for continuing his assumption that any Mexican can’t be an unbiased judge because of the wall, he doubled down on that claim.

“Well, I don’t have thin skin,” Trump protested. “I have very strong and thick skin. If you do a report and it’s not necessarily positive but, you’re right, I never complain. I do complain when it’s a lie or when it’s wrong.”

(Which of course, it always is)

Trump then went on to explain how his thick skin and “good temperament” made him have “one of the best-selling books of all-time” and a successful television show.

This is what, I think, will sink him with all but those who feel a tribal connection to him, either through whiteness or general Republicanness (not unrelated!). But anyone who is sort of on the fence about him, emotion-wise. It’s the idea that no matter what anyone says, he has to come back with the most absurd statement, because he can’t possibly have a moment of self-doubt. That’s not a political tactic, although it works politically. It’s who he is.

You saw it with the Trump Steaks nonsense. After Mitt Romney made fun of him for having a steak line that failed, Trump brought out steaks to prove they still existed, on election night! A night he won real legitmate primaries. As Chait pointed out: “His campaign displayed store-bought steaks for the media, not even bothering to fully remove the labels of the store at which they purchased them.”

That’s the thing: anyone with an ounce of security would have said, “You know what- I’m a businessman. In business, you take chances. You win some, and you lose some. I win a lot more, but no one’s perfect. I’m still a billionaire.” He could have then lit a pile of $100 bills on fire on threw the flaming pile at a lackey who would have thanked him for it. That’s how you be an asshole, but one slightly tethered to the real world.

There are a lot of people who love Trump because he says racist things, and that own’t change. But for those who don’t, they’ll see a small, vainglorious toad, who overreacts in bizarre ways to the slightest hints that he is fallible. It’s deeply unattractive, and there is a serious limit to its appeal. 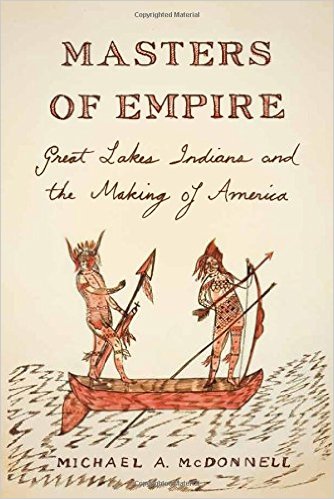 Masters of Empire: Great Lakes Indians and the Making of America, but Michael A. McDonnell

It must be strange, one would think, to be a background player in your own destruction. But that’s how we understand the great historical clash between Europeans and natives in the Americas- with the exception of some battles, like Pontiac’s Rebellion (and what a loaded word “rebellion” is, implying that he was rising up against some sort of rightful order), or the Nez Perce War, the history is one of dominance versus submission. And to be sure, the Europeans dominated, and eventually destroyed the natives, whether they were in the form of the Spanish, the French, the English, or the Americans.

But that’s far from the whole story. In Masters of Empire, Michael McDonnell, an Australian scholar who has written several books on American history, takes the story from another point of view, one that is far more accurate. This isn’t a “from the Indians’ point of view” story, which is important, but rather he demonstrates how local concerns,  rivalries, and politics weren’t so much shaped by the arrival of Europeans, but how they shaped the formation of empires.

This is a very useful corrective. Using primary, at-the-time sources, McDonnell tells the story of how most of European policy was built around placating the original inhabitants in order to further trade (here it’s important to note that while there was cruelty, enslavement, misplaced moral righteousness, and callous indifference, a policy of extermination didn’t come around in America until it became, well, America). This is a different story than we’re familiar with.

McDonnell skillfully demonstrates how much Great Lakes tribes, especially the Anishinaabeg, who centered around Michilimackinac, played the English and French against each other, making demands, declaring war, rallying troops to fight for or against one side or the other, and generally making themselves indispensable. They were a partner that had to be placated, not a rival to be fought, or worse, a submissive people to be destroyed.

In one of the book’s key elucidations, he demonstrates how the French taking sides in the Anishinaabeg rivalry with the Iroquois, and the English taking the other, was the beginning of the Seven Years War, the first battle of which he positions as the Raid on Pickawillany in Ohio, which was part of an inter-tribal war. The Seven Years War reshaped empire, and the world, and helped create the conditions that led to America. We called the front of that war here the “French and Indian War”, but McDonnell has none of that, rightfully relabeling the conflicts as The First and Second Anglo-Indian Wars.

(Throughout the book, McDonnell uses “Indian” instead of “Native American”, which might make some readers uncomfortable, but I think is more correct. I loathe “Native American”, because it implies a paternalistic adoption after forced extirpation. It basically says “Don’t think of it as America destroying your ancient way of life. You were really Americans all along, and just didn’t know it! You’re welcome!” Indian, obviously, has its problems, but at least it gives some agency.)

This isn’t revisionist history, either. This is how the wars and the policies were seen at the time, by the people living them. The whole history of Europeans on the continent was about managing their relations with the natives, who were skilled politicians, and knew how to get what they wanted in the face of overwhelming military superiority and disease-borne apocalypses.

It’s a great read, and shows how the tribal structure worked, and how lines of kinship influence politics and culture. It’s a powerful look at the Great Lakes during the dawn of the Europeans, and one can imagine the locals, with their intimate knowledge of these great and fearful bodies of water, and the rivers that feed them, shepherding frightened and lost Europeans around. You can get a sense of what the region was like before lines were drawn to signify borders, where activity was centered around the water and hunting grounds.

Indeed, the map shows a pre-state (in the national, not just the “great state of Mississippi!” sense) Great Lakes region, stretching on one end to the St. Lawrence and the Atlantic and the other up through Lake Winnipeg and on to the Hudson Bay. This is how the world was, then, before lines of demarcations chopped it up. It was a world before our obsession with borders shifted the axis, and before we decided that some people were Natives, instead of just, well, natives. It’s a world that had a narrative forced upon it, changing its history ex post facto. McDonnell’s book is a great corrective for that. It shows that these were people, who frequently bent London and Paris to their wills. Their actions shaped the world we live in now, as much as we destroyed theirs.

“On my first day in office…” -Donald Trump

Until now, the fears of a hypothetical Trump presidency- and even just typing that makes me a little woozy– were just that: hypothetical. We’ve all been able to imagine just how scary it would be, given his combination of rampant insecurity, raw egotism, paranoia, and general inability to keep two coherent thoughts in his head at any one time. But now, as the possibility becomes decidedly more real (although demographically unlikely), the actual outlines of just how fearful his win would be begin to take shape.

Hillary Clinton’s excellent attack on him  yesterday, in which she mockingly demonstrated his unfitness to serve (and demonstrating that she knows how to needle him), was just the beginning.  He further elaborated upon his attacks on the judge in his civil case, claiming that merely being of Mexican descent was a conflict of interest with Trump, a truly frightening line of thinking. And today, the Times has a piece by legal experts worried about his contempt for the First Amendment, separation of powers, and more.

But again, those are all still in the realm of “wouldn’t it be bad if he became President?” As he gets closer to the nomination, though, various norms start to take hold, and we see just how grotesque his victory really is. Reuters had the far more interesting story, about how security officials are worried about giving Trump the daily briefings that are traditionally accorded a nominee.

Eight senior security officials told Reuters they had concerns over briefing Trump, whose brash, unpredictable campaign style has been a feature of his rise as an insurgent candidate. Despite their worries, the officials said the “Top Secret” briefing to each candidate would not deviate from the usual format to avoid any appearance of bias.

Now, to be fair, one says that the briefings are more of an overview, and won’t tell him much that he won’t get from reading the paper. And it’s not like he has the intellectual wherewithal to actually explain anything. The briefings can be politically advantageous, because they give a patina of respectability to his rantings (“I’m getting security briefings because they know I’m the smartest. And let me tell you, people, ISIS is bad, ok. And the people doing the briefings are saying, ‘Mr. Trump, you have to save us, crooked Hillary can’t do, you’re the only one who can stop this’, ok?”).

However, it isn’t the politics of it. It’s the fact that people are beginning to really realize how different this is from anything we’ve ever seen, how large a mutation. We have someone who is not just intellectually unfit, or even morally, but tempramentally and emotionally. We have someone who is truly dangerous, and the people tasked with keeping this country safe are genuinely terrified. This needs to be made a much bigger deal. We’re seeing what the actual election of Donald Trump as President means- a complete breakdown of every national apparatus. The media needs to hammer this, to make sure he loses in such a way that completely discredits the terrifying politics of personal resentment.

(Of course, in the story, Rueters also quotes a sneering RNC official who makes an flagrantly dishonest snark about the email scandal, I guess for “balance”. This allows places like The Hill to have headlines reading “US Intelligence Officials Concerned About Briefing Trump, Clinton”. Goddammit, Reuters, and The Hill. This isn’t balance. Both sides aren’t doing it. This only normalizes the most abnormal and scary campaign we’ve ever had.)