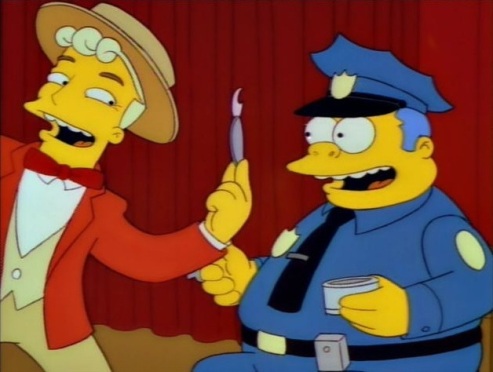 Pictured: Donald Trump campaigning for the support of the FOP.

There’s a lot of talk that the Hillary Clinton camp hasn’t yet settled on a narrative about how best to handle the unpredictable ravings of the idiot madman against whom she’ll most likely find herself running. If I may be so bold, I think over the last few days he’s provided the clearest opening, and it comes from a combination of his phony real-estate “schools” and the racism that underpins his campaign.

A federal judge has given the world an unprecedented glimpse into the ruthless business practices Donald Trump used to build his business empire.

US district court judge Gonzalo Curiel on Tuesday made public more than 400 pages of Trump University “playbooks” describing how Trump staff should target prospective students’ weaknesses to encourage them to sign up for a $34,995 Gold Elite three-day package.

First off, this is an obvious swindle, and there was some evidence in the GOP primary that this was the best hit on Trump, because it got to the heart of his self-image as a great, world-bestriding businessman. It shows him to be a cheap grifter, hitting the flats for their life savings and skipping town. His string of bankruptcies, and the fact that most of his business now is just licensing his name, deflates the basis of his campaign, showing him to be a cheapjack Lyle Lanley, always just one step ahead of the mob.

It’s also when he lashes out the most, and he did so, in a series of tweets and rants against the judge. This is when people say they are “disappointed” with the decision. Not so our Trump.

You’ll notice of course that these came within 10 minutes of each other. Not really a temperate person. The Times already noted how disturbing it is to see a Presidential candidate attack in such a personal manner the judicial branch, but for the real horrorshow, let’s go to this part of a speech.

Trump hit back calling Curiel a “hater”, a “total disgrace” and “biased”. “I have a judge who is a hater of Donald Trump. A hater. He’s a hater,” Trump said at a rally near the courthouse in San Diego. “His name is Gonzalo Curiel. And he is not doing the right thing … [He] happens to be, we believe, Mexican.”

See, it’s the last part that really sets this on a whole new level. There is no way to interpret that except to say that Mexicans are bad, and are aligned against Trump, and are therefore aligned against America. It is absolute naked racism. This case in no way involves, say, a border wall, in which case maybe you could make a (still racist!) case that a Mexican judge would be biased. But not in this one.

Curiel, by the way, was born in Indiana.

This is all Hillary needs to do. His attacks on judges show his thin-skin nd wild intemperance. His quote on “happens to be, we believe, Mexican” should be run over and over in every Hispanic market to make sure his numbers never climb. And his obvious swindle, the details of which are now perfectly clear, should be hammered every day. This is a man who sees Americans as a way to feed his ego and his wallet, and sees everyone else as an obstacle to be removed. Between his venality, his absurdity, and his racism, there’s really nothing more to say.

Perfection, of a kind, he was after
And the poetry he wrote was easy to understand;

-Auden, “Epitath on a Tyrant” 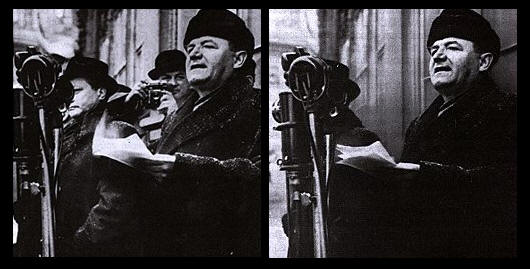 The man is gone, but the hat remains. Image from nakedtourguideprague.com

It’s doubtful that Donald Trump would know who Emomali Rahmon was. To be fair, very few Americans do. I was only vaguely aware of him. He’s the President of Tajikistan, a landlocked country in Central Asia that doesn’t come up very much. It’s not considered one of the world’s happiest places. With borders that touch Afghanistan and the rebellious Xinjiang region of China, not to mention its abutting of Jammu and Kashmir, it is in a fairly rough place in the world, and has never enjoyed much stability in the post-Soviet era. That’s about to change, albeit in a way that makes most people uncomfortable.

Rahmon, the President, successfully passed a ballot referendum that scrapped term limits, as well as lowered the age one could stand for President to 30, which by a great coincidence gives his son the ability to run. It’s instituting a President-for-Life plan, and it worked. A low-information campaign (which mostly talked about vague “changes to the constitution”), coupled with a population weary about politics, helped make the referendum a landslide. With 94.4% of the votes, Rustam, the fresh-faced whelping, now has a clear path to 40 years of power. It’s hard to say democracy died in Tajikistan, as it was never fully born. But it’s easy to see that this is how authoritarians act. They tell you not to worry you weary hearts. They tell you it’ll all be better if you just let them take care of it. They tell you that all you have to do is give them power, and things will be fine.

Donald Trump may never have heard of Emomali Rahmon, but both he and his gruesome campaign head, Paul Manafort, know that playbook by heart. They’ve taken the lessons of him and every other tinpot tyrant that has stumpled across history, and brought them to America.