We’ll start this week’s with a really interesting piece by Elizabeth Piccuto at Arc Digital, titled “The Morality of Social Media Mobs.” We all know that social media mobs can be terrifying, a herd of wildebeest suddenly turning, catching something in the air, a sniff of food or a rutting sow, and bearing down at ground-churning and pulverizing speeds toward one target. Sometimes this target can be deserving and powerful and in need of a good shaking (like Elon Musk), but often it can be a nobody shmuck who suddenly have their lives ruined.

(There’s another category, which is trolling idiots who want to be attacked so that they can say they bravely stood up to the SJW mob. There’s a whole cottage industry around it. Tricking wingnut gulls into giving you money is America’s most sustainable industry.)

We tend to see this, and it is painted as, a bunch of virtue-signaling nonsense, a grotesque pile-on so that the finger-pointers can feel better about themselves, with no concern for the car wreck at which they are gawking or the pulped-up bodies inside, before moving on to the next show. But, as Piccuto argues, it isn’t quite that simple.

If someone says something racist, it hardly seems bad to, say, post a reply or quote-tweet saying it’s racist. The person who uttered the original statement might well take it to heart and stop saying such things. Even if she doesn’t, other folks may read your criticism and learn something about what people find racist. And again, stating your own moral opinions can usefully re-affirm them.

If it’s not bad for you to say make such a statement, why should the fact that other people said the same thing render your statement immoral? Why should a morally permissible or praiseworthy action become immoral when others perform the same action? When does the action suddenly become wrong? After 50 people say it? 1,000? Why would repeating such an action make it wrong?

It’s an interesting argument (there is a lot more to this piece, of course, and you should read the whole thing). We actually do act as individuals, and it is weird to say that there is a cut-off point for condemning truly shitty behavior. Piccuto isn’t saying that the mob is good, per se, although sometimes internet virtue can be a true force for good, but that the individual actors are all acting correctly.

Now, granted, that’s the very nature of a mob: individual actions, all of which are made, at least initially, with some kind of agency, turning into something different and something far more cohesive. And I do think there is a tendency, on the internet and in real life, to avoid being the last person to take an action.

After all, if everyone is calling out some chud for saying that women haven’t really earned the right to vote, then there is pressure to do the same, lest you lend support by dint of absence. But then, I’m sure people yelling at lunch-counter protestors felt the same way: they didn’t want to get involved, but didn’t want to not get involved either, and that’s how a mob forms and then takes on a life of it’s own.

Those aren’t the same, and I’m not drawing an equivalence. The questions here are how much intent matters, and when good actions become gratuitious and autonomic instead of thoughtful. I don’t know; I’m not a philosopher. But Piccuto is, so read the damn piece already.

(Disclosure? Many years ago Elizabeth and I were sort of friends in that weird but sincere internet way, through what were once very lively and thoughtful message boards on The New Republic. It sounds strange, I know! You had to be there. We really gave Marty Peretz the whatfor.)

Eurasia as the Center of the World

The Euro/US-centric map is, literally, disorienting. It breaks up the East. It takes a huge landmass and puts it on two opposite edges of the paper. It distracts us from how huge and central it is.

Now, granted, over the last 500 years Europe and then North America have had an outsized role in the world, but for most of human history the real action has been the heart of the Eurasian landmass, with a dominant China, wave after wave of steppe people altering and creating new cultures, continuity through change in the Persian heartland. When Rome shifted to Constantinople, that wasn’t a remote output; it was the heart of the action. Rome itself wasn’t European. It was Mediterranean, connected to the vast Asian continent that stretched through Silk Roads.

We’re reminded of that by this post from the Archeological News Network, “Origins And Spread Of Eurasian Fruits Traced To The Ancient Silk Road“.

Studies of ancient preserved plant remains from a medieval archaeological site in the Pamir Mountains of Uzbekistan have shown that fruits, such as apples, peaches, apricots, and melons, were cultivated in the foothills of Inner Asia. The archaeobotanical study, conducted by Robert Spengler of the Max Planck Institute for the Science of Human History, is among the first systematic analyses of medieval agricultural crops in the heart of the ancient Silk Road. Spengler identified a rich assemblage of fruit and nut crops, showing that many of the crops we are all familiar with today were cultivated along the ancient trade routes.

And from there, they spread out over the world. We’re seeing again that Eurasia is going to be the fulcrum of the world, as geography and geopolitics make a comeback. We see historic powers moving around again, as Europe recedes away from its colonial legacy and the US willingly shrinks into itself, wrecked by gigantism and despair.

Fruit might be a small part of that. But as we fight rearguard battles regarding European control over Asian affairs, it is helpful to note that the last half-millennia was an aberration. The fruit on your plate is a reminder of where our world was truly born, and where it is going again.

Here’s another one from Archeology News Network, which, to be honest, is really stretching the definition of archeology. But that’s ok, because this is cool.

All of those orange things are galaxies, or host galaxies. The blue is gas or dark matter. There is a lot more of the latter than we had thought.

If the region had an unusually small number of galaxies, the scientists would be able to conclude that starlight could not penetrate as far as expected through the intergalactic gas; if it had an unusually large number of galaxies, the implication would be that the region had cooled significantly over the previous several hundred million years. (Having few galaxies in a region would mean not only that there was less light created by those galaxies, but also that even more opaque gas was being formed, so the light could not travel as far as astronomers had expected.)

“It was a rare case in astronomy where two competing models, both of which were compelling in their own way, offered precisely opposite predictions, and we were lucky that those predictions were testable,” said Steven Furlanetto, a UCLA professor of astronomy and a co-author of the research.

The researchers found that region contains far fewer galaxies than expected — clear evidence that starlight could not get through. The paucity of galaxies could be the reason this region is so opaque.

That’s pretty cool. We’re still finding new and unexpected things about the universe, and we will certainly be for all our lives, and maybe the entirety of human history. Honestly, almost certainly. The universe is so vast and so old and so literally inhuman that it somewhat stretches credulity to even imagine we can fathom it.

And yet…we’ve discovered a lot. Scientists are bravely challenging their own notions and finding these dark spaces and trying to fill in what is there. It’s inspiring.

And I think we need that inspiration. Look at that image again. Remember that the orange areas are essentially galaxies. Galaxies! With billions and billions of stars each. There are 150,000,000,000 stars in the Milky Way.  It makes you sort of queasy and uncertain to see these galaxies, with whatever celestial and atomic and rock-crunching and black-hole-having and maybe even intelligent drama going on in them, through vast and incomprehensible distances, through crushing amounts of space, and seeing them reduced to a tiny constellation of dots.

We don’t really know anything. But we know so much. The sacred space in between there is where you can fit all of our human identity.

The Fragility of Supply Chains 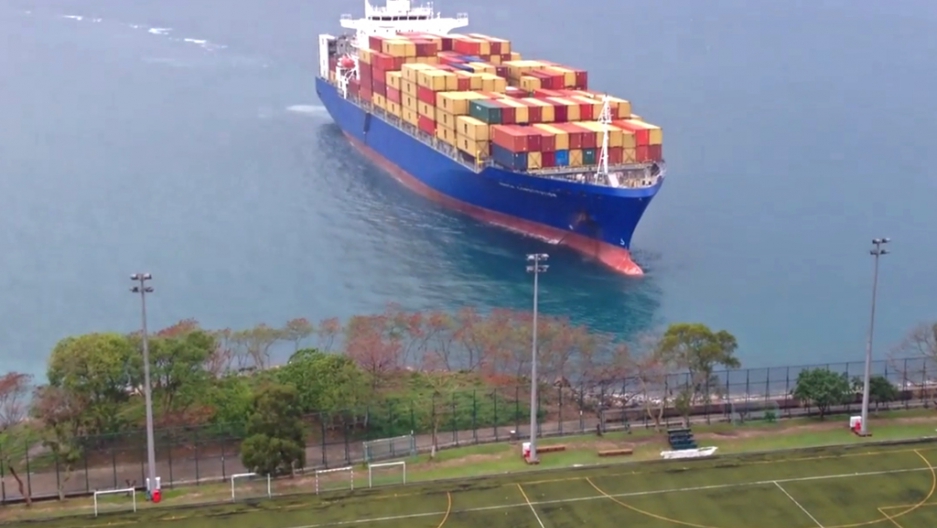 It’s odd to think how dependent we are supply chains and how little we think of them. When we do, it’s to wonder how we can regulate global supply chains so as to improve worker and environmental rights globally (which to be solves a lot of concerns both real and political, and I would love to see as the centerpiece of a Dem platform. Hot damn, I want it!).

But really, the entire modern world and like 80% of our conveniences are based on enormous global supply and logistic chains, as vast and interconnected as that galaxy map above, except not in the hands of some kind of Celestial Mapmaker, but rather terrestrial actuaries. Which is probably better!

It’s still scary, though. This Foreign Policy article by Elisabeth Braw highlights just how serious the threats to supply chains are, and just how dependent upon them we all are.

When everything works, the supply chains allow distributors and retailers to keep minimal stocks, a model known as just-in-time. In the U.K., for example, many retailers only stock 24 hours’ worth of fresh produce. The system works so well that between 2010 and 2015, 52 percent of U.K.-based suppliers reduced their stock levels, while just 22 percent increased their stock. That, too, helps keep consumer prices low by saving on warehousing costs. At Tesco, Britain’s largest retailer, an orange, whether it’s from Argentina, Chile, Cyprus, Egypt, Israel, Morocco, Peru, South Africa, Spain, Swaziland, Turkey, or Uruguay, sets the consumer back a mere 30 pence (39 cents).

That’s awesome, right? It is! It is actually really amazing and a testament to logistical science. But.

But if someone damaged the supply chains, all of this falls apart fast.

In the UK, the government is stockpiling food, medicine, and other essentials in case the chains are disrupted due to Brexit, further cementing it as the 2nd-worst decision of 2016. But it isn’t just an own goal we have to worry about.

We talked earlier about how climate change could and is easily disrupting supply chains, with radiating side effects. Hackers, terrorists, and other bad actors can turn the state of the global economy into complete higgedly-piggedly. It’s a real threat, and if any of feel safe from hacking, well, we haven’t been paying attention.

I’m not as worried about a state attack. Russia is just as connected and dependent on the chain, and god knows China is. When everything is connected, there are no targeted attempts. When the web snaps, the system explodes.

But there are a lot of people and groups who don’t mind seeing that. The motivation is the same: puncturing modernity, whether for religion or Luddish obstinance or cyberpunk anarchism or just the lulz (and these blend together).

Modernity is what it is. We’re all part of this. We’re all so dependent on vast, amazing, mind-blowing systems, from the internet to GPS to getting oranges into our maws. It’s a system in which we’re all enmeshed, comfortably for the most part. But if you feel uneasy for reasons you can’t explain, it might be that: we’re trapped in these behemoths, and they are all so prone to tumbling. If that’s not the post-modern, late-stage capitalist condition, I don’t know what is.

Enjoy the weekend, everyone!

One thought on “Internet Mobs, Supply Chains, and an Emptiness in Deep Space: Quick Hits and Good Read”