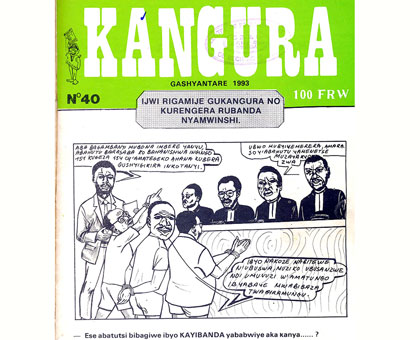 Hassan Ngeze was a touch and hyper-verbal little criminal in Rwanda, one of those guys who is too smart for his station, but clinically unable to be anything but a criminal. It was his instinct. He insinuated himself with the clan surrounding Rwanda’s President Juvenal Habyarimana; or, more specifically, the cruel inner circle of the First Lady, Madame Agathe, the circle out of which Hutu Power spread. It’s a cliche to say that the Madame and her family were the real power, both political and intellectual, behind the throne, but it is nonetheless true.

This is the circle to which Ngeze was drawn, and his skills made themselves valuable. He was appointed as Editor-in-Chief of Kangura, a pro-government newspaper whose name roughly translates as “Wake Them Up!” It was there he really hit his stride. The most famous publication under him was the “Hutu 10 Commandments“. This list jumped around between assaults on Tutsi women (the main target), bureaucratic racism against Tutsis, buried in the middle, #8: “Hutus must cease having pity for the Tutsi.”

It worked. Kangura, along with Radio-Television Libre des Mille Collines, helped create an atmosphere of fear and paranoia and violence that helped spur murderous insanity of the genocide. Ngeze stepped up his role during the killing, passing out names of targets, but in a way those were his secondary crimes. Ngeze, along with RTLMC’s Ferdinand Nahimana and Jean-Bosco Barayagwiza, were put on trial for inciting genocide, and convicted for their role. These were the first propagandists to be convicted of war crimes since Julius Streicher, the violently anti-Semitic publisher of Der Sturmer, the clear antecedent to Kangura.

Read more for Burundi and America…

Neighboring Burundi, with its similar Hutu/Tutsi divide, has always been a mirror of Rwanda, and wracked by its own ethnic violence. It seems to be happening again, as the mechanization of normal power politics are being mutated into sectarian hatred by normal grasping politicians.  There is even the same language used by Ngeze and Nahimana, the labeling of Tutsis with the very specific “cockroach”. This dehumanizing language is always a key proponent of ethnic hatred, and allows it to ramp up to ethnic cleansing and genocide.

That’s the nut of the matter, and one of the main dilemmas for any free society: propaganda works. There isn’t something in the Rwandan or Hutsi character that makes them uniquely susceptible to hatred, unless you think that it is the same characteristic they share with Germans, Turks, Americans, Australians, Mongols, or anyone else who has committed genocide. Every place has its own history, its own trials and terrors and historical shadows that loom out of the night like a Goya nightmare. They can be manipulated, easily, and that manipulation can quickly turn to violence.

Are we in America going through that? We see an “othering” more vicious than probably any time since the 1930s. The hatred toward Communists was a different sort of thing than what we see against Mexicans and Muslims today. You have major politicians talking about these groups as one does a insect, or a virus. The language is thankfully slightly more couched in humanity, but only to an extent.

We’re at a point in our history where economic uncertainty and instant communication, the kind that Ngeze could only have dreamed of, has created an atmosphere for smart hustlers to promote themselves purely as an opposition force to change. Bigots like Steve King and Louis Gohmert and Donald Trump exploit that opening naturally, with no sense of responsibility. They claim to be the only people who can see how we’re being beaten, how we’re being destroyed and eaten from within, like with a termite infestation. The enemy becomes a faceless horde, and there is usually a hint of sexual menace to it. They are telling Americans that it’s time to wake up. The question for an open society is where the line falls? When does political speech become violent propaganda? When does “wake up, America” become “wake them up!”

This is why every bigoted outburst has to be condemned and jeered at. These ideas have to be dragged screaming into the light. There might not be a legal line for politicians to cross, and maybe there shouldn’t be. It would be impossible to adjudicate (and you know that the wealthy would be the first to use the law to silence class warfare). But that just makes it more incumbent on everyone else to do so. No one should be afraid of being called “politically correct”, or even boring. It’s important to make sure that the majority of people recognize this kind of language as not only unacceptable, but legitimately dangerous.  There are obstacles in America that can prevent sectarian violence, both politically and in our history, but those aren’t permanent. This can all go away, as words sharpen into the point of a sword, mold themselves into a bullet. It is incumbent upon everyone to make sure that never happens.

2 thoughts on “Burundi, Cockroaches, And The Terrible Power of Language”