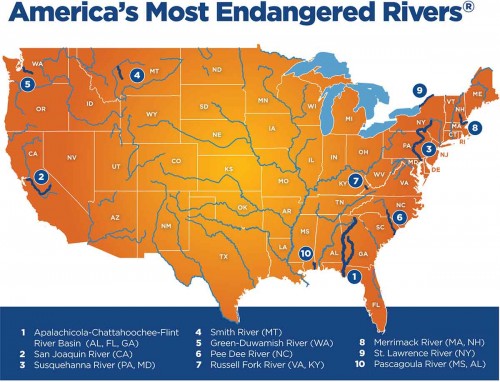 Image courtesy of americanriver.org. Support it!

Yesterday, the good people at American Rivers released their annual “Endangered Rivers” report, ranging from the Green-Duwamish in Washington to the highly-contested Apalachicola-Chattahoochee-Flint basin in the southeast, where Atlanta gets most of its supply, and which is the darkhorse candidate for “first actual US water war”.  Rivers on it include major ones like the St. Lawrence, the Susquehanna, and the San Joaquin.

The culprits are what you’d expect: outdated dam systems, the paving over of floodplains which leads to excessive runoff, over-tapping, poor upstream management, and pollution. Often, these work in concert to dry up rivers and posion what is left. A lot of this was done in good faith, or ignorance. Dams were needed, and land had to be built on. The effects of this took years to see, but now the bill is coming due, exacerbated by the multiplying impact of climate change.

Rivers are our heritage. They are how we traveled the nation in its early days. The original West, just beyond the mountains, were based around river cities like Pittsburgh, Cincinnati, and St. Louis. Chicago is Chicago because the convergence of the Lakes, the Des Plaines, Illinois, and Mississippi connected the bulk of America with the Atlantic. But decades of expansion, development, and pollution, and overuse have threatened many of our main waterways. Vast ecosystems are being destroyed, and we’re undercutting our own water supplies. There have been people banging on heroically about this for decades, with some great successes. But the vastness of the problem needs bigger solutions.

END_OF_DOCUMENT_TOKEN_TO_BE_REPLACED 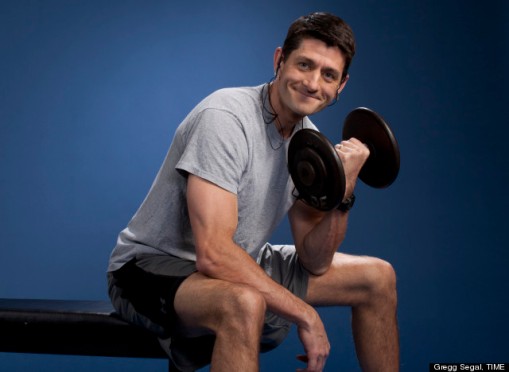 Still not as fit as Trump, you handsome dork.

Writing at Slate, Jim Newell ably lays out the reasons why it would be stupid for Paul Ryan, who is not stupid, to seek or accept the nomination at the Republican convention in Cleveland this year (which already has a perfect theme song). Basically, as follows:

It’s a compelling argument! And it’s based in reality. After all, between them, Cruz and Trump are pulling some 80% of the votes, and there would be an open revolt in the base. Who would vote for him? Democrats hate him because, well, he’s a Randian superman wants to starve the poor, despite dewy protests to the contrary. And because he’s taken the role of Speaker of the House, he’s seen as a betraying Chamberlain by the far right (i.e. most of the Republican Party). The Ryan Bubble, as Newell points out, is driven by the same media who has heaped lavish praise on his non-existent wonkitude. That’s all true. My counterpoint though, is thus: