Charlie Pierce is good enough to point us to Genius, the story of Maxwell Perkins and Thomas Wolfe, coming this summer. It’s based on Scott Berg’s breathtakingly good book on Perkins, who was the editor for, among others, Wolfe, Hemingway, and Fitzgerald.  The movie’s title kind of gives me pause, connoting a teleological sort of biopic, and the trailer sort of hints at the same thing, but what the hell? We’re getting a movie about an editor, and that’s cause for joy. Hopefully, the trailer just hits the “high” points, with the movie being full of clips like below. It’s is a good look at the maddening process between writer and editor, even though it usually happens over emails and passive-aggressive chats.

What I have a feeling the movie is going to do is start a sort of conversation about Thomas Wolfe. In my opinion, he is the Great American Writer. This is different than the greatest American writer (Melville, though I’ll entertain arguments). Wolfe is gigantic and overstretched, flawed and brilliant, maddening and over-the-top and keenly sentimental and brashly cynical and full of a pulsing sense of certainty buoyed by the idea that everything is nonsense. He is always grasping at something huge and enormous even as you feel the ground slipping beneath his feet. There seems to be a fear that if there isn’t blazing certainty there is a hollow emptiness.

He isn’t a metaphor for America or anything. He is, first and foremost, a great writer. He captures the sadness of childhood and the passage of time better than nearly anyone (his only competition, to me, is James T. Farrell, about whom I should write more). I think during the conversation this movie will hopefully provoke there will be a large focus on his flaws, his “genius for the sake of genius” style, and the grandiosity of his vision. But I hope that doesn’t obscure how amazing he was at boring into the small moments, the painful slights that linger, the memories that turn and melt into every ounce of your soul, and the exquisite agony of having a mind. The Thomas Wolfe we should celebrate is a combination of good and bad impulses, of extension and retraction, and someone who tried to capture an overwhelming and uncertain land, sure of its destiny but unsure of its history, an endless experiment with no one in charge. Wolfe, however, was lucky Perkins was in command. His driving subject could use such a steady hand. 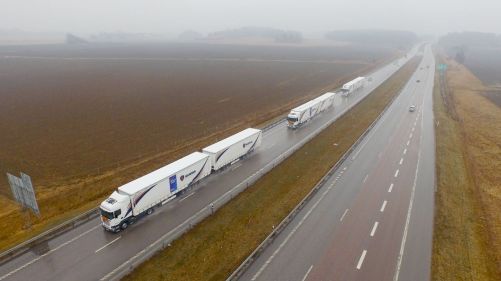 Image from Scania via Quartz

Over the weekend, as reported in Re/Code, Ford announced a successful test of an autonomous car driving in the dark- that is, without some of its equipment working. The car was driving without its camera, relying mainly on laser directions (lidar). Basically, it was like a human having to drive after their headlights went out, on a black moonless night. Or a bright one, where it was still hard to see. You know, just night, basically. Anyway, you and I would be in trouble, but the Ford car wasn’t. This is a big breakthrough.

I’m a passionate advocate of self-driving cars. Not professionally, because who the hell cares what I have to say about it, but personally. It makes me sick and angry to think that one moment of distraction by myself or another driver can kill someone I love or ruin their life forever, that a split second of indecision or mistake can have such a shattering impact. I think we’re going to look back at the era of human-driven cars as a time of unimaginable barbarism, where tens of thousands of people a year were killed and tens of thousands more maimed driving these glass and steel bullets at breakneck speeds. Self-driving cars will also be much better for fuel economy– there will be less driving around confused, less sudden braking, and fewer incidences of inefficient driving, the biggest cause of fuel waste.

There are drawbacks of course- system safety (imagine if a hacker breaks in and messes with V2V or V2I communications), a lack of autonomy, massive disruptions to the insurance industry, etc. There are huge political obstacles, as well as cultural ones. There is also the immediate problem that it will could cause huge layoffs in vulnerable sectors while immediately benefitting corporations. That’s a drawback, and one with unsettling human and political ramifications.