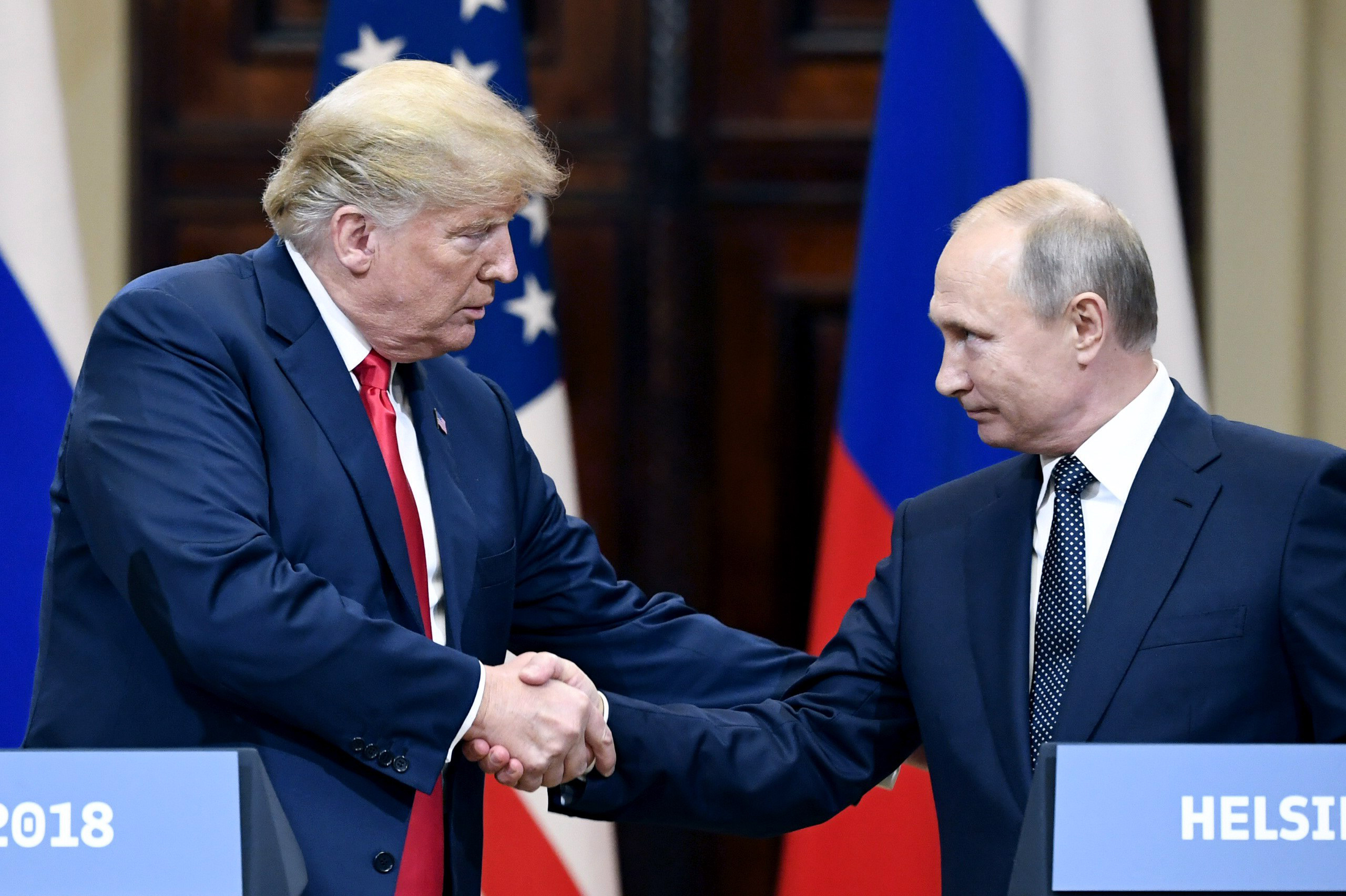 It’s weird for the shorter man to be towering above

One thing that gets lost in the increasingly closed-case argument of whether or not the President of the United States colluded with Russian intelligence to win his election is that he won’t actually be charged with “collusion”.

There are many crimes that can come down from the Mueller investigation, including possibly Conspiracy to Default, various stages of election fraud, and possibly even treason. But not “collusion”, per se, which is more a collected state of events than a prosecutable crime. It’s why it is sort of smart for the Trump team to say “there’s no proof of collusion!” because, legally speaking, there won’t be. There will just be a series of indictments, pleas, and convictions on charges that, added up, make it clear vast swathes of the Republican party, including the Trump campaign, worked with the Russian government to help steal and election and then cover up the crimes.

Actions also add up to collusion. And the Helsinki press conference yesterday was the most obvious action yet.

My people came to me, Dan Coates, came to me and some others they said they think it’s Russia. I have President Putin. He just said it’s not Russia.

I will say this: I don’t see any reason why it would be.

I have great confidence in my intelligence people but I will tell you that President Putin was extremely strong and powerful in his denial today and what he did is an incredible offer.

Look, if you’re reading this blog, you’ve already read 30,000 words on the insane disgrace of the press conference, and how the President stood there and took the side of Russia’s brutal autocrat over his own intelligence services. You read how he ranted about insane conspiracy theories, using them as a dodge to what actually happened in 2016. He talked about the electoral college and about Hillary’s emails, asking about “the server”, even though, 1) as the indictment made clear the server was digitally copied and so didn’t need to be “taken”, and 2) Donald Trump has no idea what a server is.

You don’t need me to tell you why that was horrible. You don’t need me to tell you that, on every level, it was a show of abject humiliation, in which STRONG MAN FUCK YOUR FEELINGS DONALD THE DESTROYER TRUMP was intentionally kept waiting 45 minutes by Putin. That’s an unmistakable display of dominance, about which Trump, who spends four hours a day rehashing something mean Liza Minelli said to him in 1979, made not a peep or protestation. 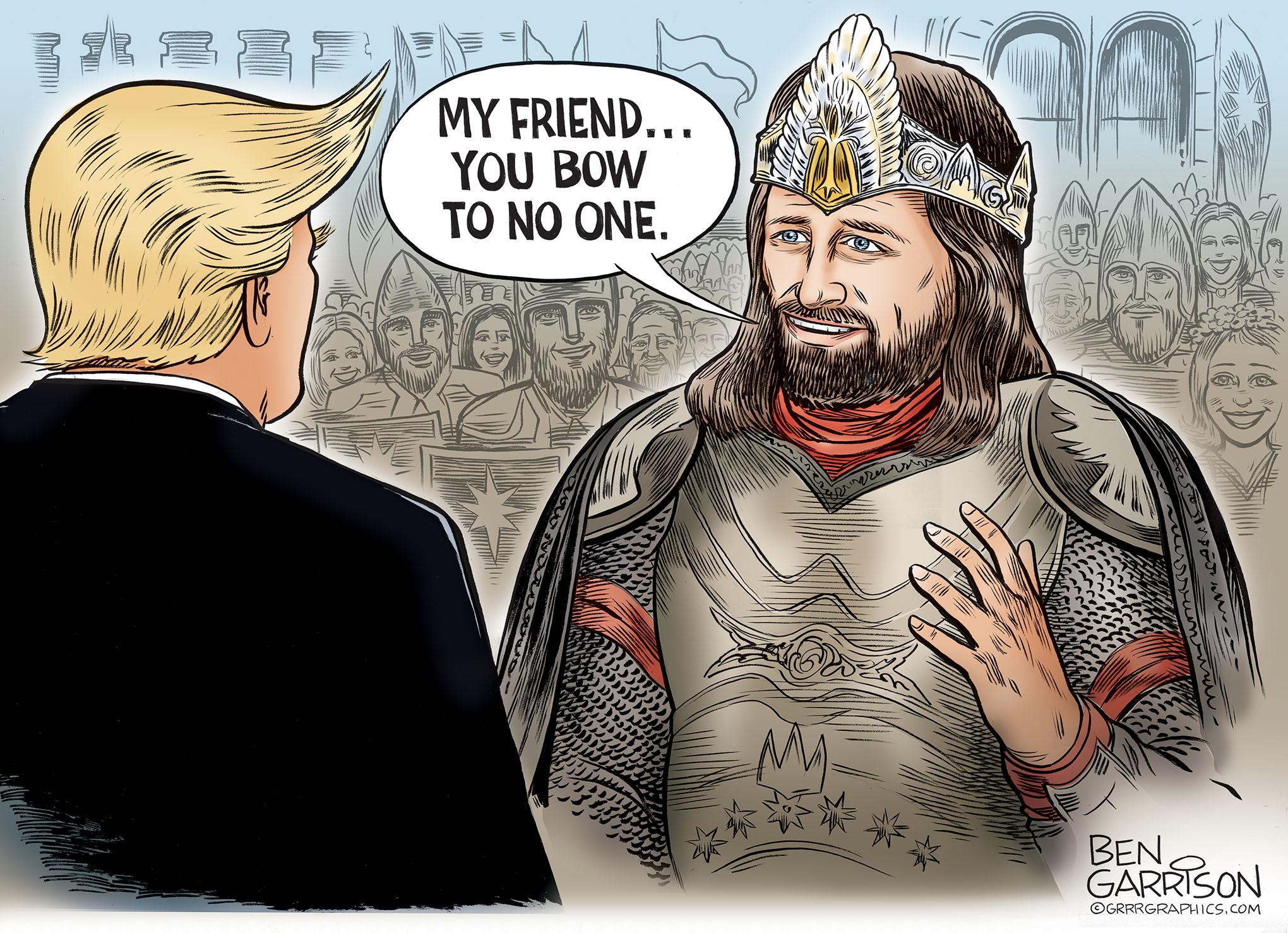 Still feel good about this one, Ben?

Everyone knows what happened, and even the FOX-heads, for the most part, pronounced it a terrible disgrace, although we’ll see how it is spun today. Along the corners of Twitter and the far fringes, we started to get to the point of “It’s totally cool if they colluded, because they saved us from Hillary”, and we’ll see if that gets traction. My guess is it will get some, though not officially, as the GOP play seems to be “if no one suffers any consequences, then any actions are by definition ok.”

But one thing should be made clear, every day: there is no longer any question of collusion. That press conference, in and of itself, was an attempt by the the President of the United States to provide cover for the government of Russia’s direct, indictable actions against the US electoral system. He obfuscated and flat-out lied in the service of Putin and the Russian military-intelligence complex about matters relating to his own election. With all of his answers, he was working hand-in-hand with the people who broke laws to get him elected. In doing so, he also gave them cover, and essentially permission, to continue to do so in 2018 and 2020.

Is he doing this because he’s an asset? Because he’s compromised? Because he actively worked with them in 2016, along with his dull adult sons? Because he’s deeply in debt to Russian billionaires? Because he laundered money for them? Or simply because he can’t accept that his win could in any way be tainted?

It doesn’t matter which one of these it is, and it is probably most of them in a swirling combination of decades-old greed and selfishness. But whatever it is, it is clear that Trump is running cover for a foreign government credibly accused of committing crimes against individuals, organizations, and the electoral system of a whole, and is subsuming the interests of the country to his own vast, dark emptiness. That can no longer be denied, and anyone who fails to live up to times in which they live is entirely complicit.

One thought on “The Helsinki Press Conference Was Collusion”