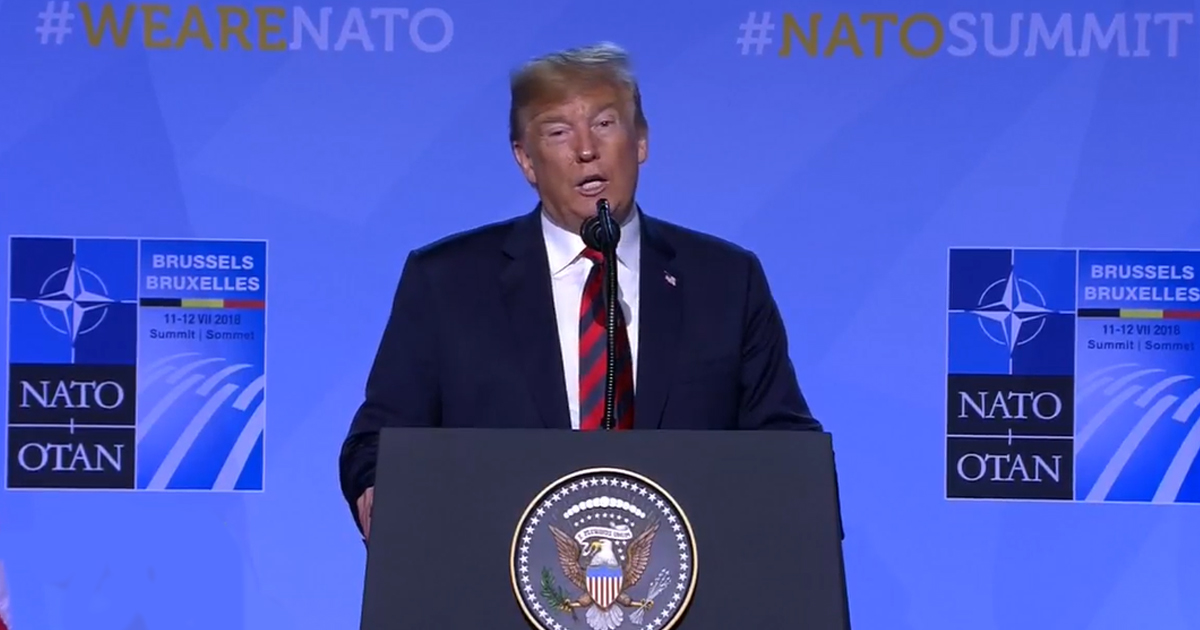 “I said, ‘Angela, what the hell is OTAN?’ I don’t think anyone knows.”

I’m going to caveat most of this post by saying that I was watching Trump’s surprise press conference this morning with the sound off, closed-captioned at the gym, where I broke personal running records out of sheer boggled frustration and unhidden anger. So I am making certain assumptions about his tone and possibly even motivations, though at this point: come on. We know how he talks.

For me, the absolute lowest moment wasn’t when he switched topics to go on and on about how successful he was on North Korea, turning it over to Mike Pompeo to further praise how successful Trump was. It wasn’t even when he talked about how no Republican presidential candidate has won Wisconsin since Eisenhower, a lie that even if true isn’t 100% relevant to NATO spending levels.

No, it was when he was asked a question by a reporter who said she was from a “country in northern Africa, Tunisia”, and asked Trump about if there would be more wars in the region, vis a vis US policy. I don’t have a transcript, so I don’t know if she was more specific (again, relying on the closed caption), but I do know about Trump’s answer.

This is paraphrase, but “Africa, what’s happening in Africa is really bad. What I see in my intelligence reports, people don’t understand how bad it is in Africa. Vicious! Terrible what is going on there. We’d very much like peace. We have the best military, the best bombs, the best planes, it’s better than it ever has been. Peace through strength. But we hope we never have to use it. Wouldn’t that be great? To have the very best stuff and never use it. OK, thank you.”

It was clear that he has never heard of the “Tunisia” before, and only heard “Africa”, and was thinking, you know Africa. That the reporter was very light-skinned didn’t throw him off, to his credit, although I suppose his favorite people from Africa have been white.

“One thing that no one understands is that Tunisia is closer to Europe than to, you know, elephants.” Donald Trump, next week.

I don’t expect the President of the United States to know everything about every country. I do expect, and I hope it isn’t too much to ask, that the President should know that if a reporter from Tunisia is asking about regional peace she certainly means the Middle East/North Africa region. The sheer childish intensity of his ignorance can still stagger, and is indeed even more staggering as time goes on. He casually acts the squalling child, demanding that there are no demands made on his intelligence, after 18 months of the weightiest job on the planet. It’s yet another reminder that we shouldn’t elect our single dumbest citizen.

This isn’t incidental. Sure, the rest of the press conference was bad. Ostensibly, it was about how the allies had agreed to pay at levels they have never paid at before, and how he told them to raise their defense spending up to 4% of their GDP, since the US is at 4.2% (as if we only spend defense money in Europe, or as if most of that isn’t spent on boondoggles, and as if he doesn’t continually brag about how much money he’s spending on the military).

That’s of course a non-starter, and if it is a negotiating tactic, it is a dumb one, since he can’t win. If it is so NATO members raise their spending to 2%, as they already are, he can declare a somewhat-partially-accurate “victory”, it is pure mendacity. If it is so he can shrug his shoulders and leave NATO and continue breaking the western alliance and high-five Putin, well, that is a whole other (possibly extremely predictable) barrel of monkeys.

It also was maddening how he told us all that he “made a very strong point” (that’s a quote) about how immigration was a problem in Europe and it is ruining their countries and they had to do something about it. That’s first-order undisguised racism, doubled up by his gloating that he won his election in part because of immigration, as did the new Italian PM, as did the Brexiters. He also talked at length about how challenging things were in London, or in his words, “hot”, but that he was going to be able to spend a few days at his golf club, which was a magical place.

So yeah: it was the sundowning ramblings of a career liar and a professional racist. It was worse than that, of course, since it was another way to cause chaos in the west, setting unrealistic expectations for our still-maybe-allies. But the Africa thing really stuck with me.

Although, I guess, we should be grateful he didn’t start talking about Kanye. But you wouldn’t have been surprised, would you?