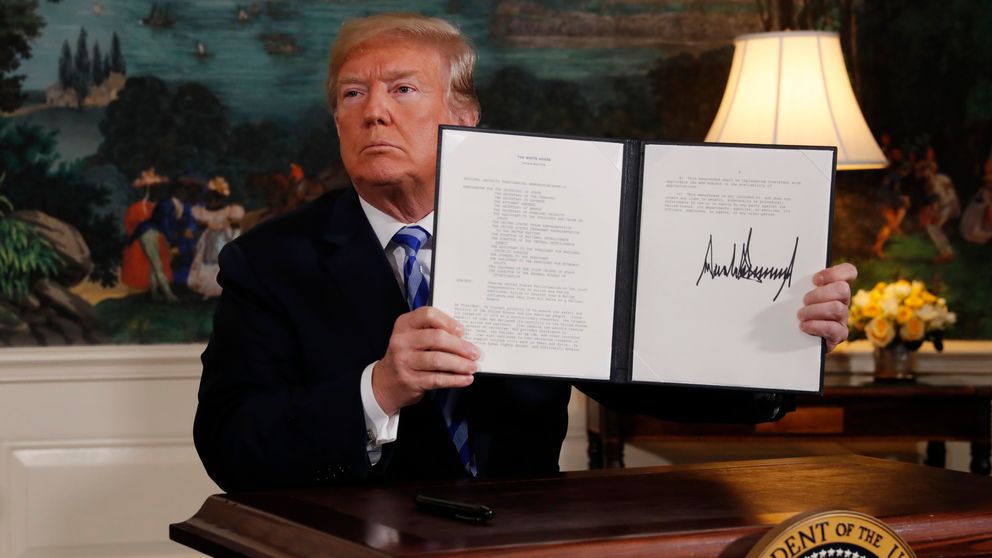 Essentially, Iran wants the EU to choose. Trump does as well, as we see with the new Ambassador to Germany making demands, equal parts thuggish and cloddish, that Germany stop doing business with Iran.

Who the hell are these guys? I somehow can’t imagine this going over too well. Germany spent years working with the US, UK, France, Russia, and China to extract maximal concessions from Iran, at the cost of international trade, and have finally started doing business again. And now that because Trump likes Bibi more than Obama they have to stop? Come on.

That’s the point. In announcing that we would violate a treaty, we’ve left our European allies with three choices.

I don’t know how #3 will play out, really. I won’t pretend to speak to the economics of this, but in a vacuum, #3 is most likely. It just makes the most sense. The US doesn’t abide by its treaties, even the ones that it worked so hard to create. If Donald Trump insists upon acting like this, then the US will be increasingly left to its own devices.

Obviously, the US can’t be ignored. But I don’t see world leaders really bothering to to anything but try to temper the worst of Trump’s behaviors anymore. Macron basically agreed to be a little poodle for Trump, hoping that obsequious flattery would convince him to stay in the JCPOA. But nothing could. The one thing Trump feels for certain is that he has to be smarter than Obama.

His vanity, his emptiness, his (in David Roth’s brilliant words) “blank sucking nullity, which is to say, his entirety, wouldn’t let him do anything else. And if they hadn’t already, I think other world leaders have now realized that: you can’t reason with a man like that, because there isn’t really a man there.

That’s what makes even the attempt at rationalizing this act silly and self-defeating. In no world would this violation make sense. It’s 100% unilateral; the administration didn’t even try to offer up evidence to the contrary, save for the assertion, backed by nothing except Bibi’s dipshit slideshow from 2002.

Still, there were a few attempts at rationalizations. Let’s look at why those are wrong.

Iran Is Still a Bad Actor

You’ll get no arguments from me here! The Houthis in Yemen run their parts of the country like criminal brigands, with increasing corruption and brutality, total incompetence, and a particularly medieval style. Their crimes are overshadowed by the US/UK-backed Saudi atrocities (this blog is particularly guilty of that), but they shouldn’t be. Iran also backs Asad. It’s not a positive force in the Middle East!

But also…that’s not the point. The JCPOA isn’t about constraining Iranian power. Iran is a historic power in the Middle East. Except for the last hundred-plus years, it always has been. It always will be. The JCPOA wasn’t designed to make sure Iran couldn’t influence its neighborhood; that would have been impossible. Attempting to do so wouldn’t exactly fly.

Remember, an Islamic State wasn’t the point of the Iran Revolution, even if that was the tragic outcome. The point was to throw off Western dominance. The JCPOA is about as far as we can go in reasserting that dominance. It’ll be good to work with Iran to make it be a better actor. But that’s not what is happening here.

Iran was not in violation of the JCPOA as written. We don’t get to pretend it was. And acting like this is just pushing it further away from responsibility, most likely pushing it closer to China, and to a lesser extent, Russia.

(and the US has zero moral credibility to talk about being a good actor in the Middle East, what with our complicity in Yemeni genocide)

I’ve seen a few instances of this argument, but this is a good distilled one. I hesitate to put this in, because I enjoy her work.  I think this is good faith from a good place but missing a key element.

And what's all the talk about pulling out of the deal putting US at odds with allies. From Israel to Saudi Arabia – folks at the frontline – always hated the deal. And US might not agree with Euros on JCPOA but all agree Iran should never get the bomb. Common ground to work on.

Right…except that that common ground was already had years ago, which is why the US spent years building a sanctions regime, roping in a reluctant China and Russia, and applying enough pressure on Iran that they would give up their most powerful tool. And now we’re just supposed to what, start over? Say “trust us”? And don’t worry, Bibi and MBS are on our side?

To believe this is to ignore the fact that we already did this. There is little reason why the EU will go back to the table, except maybe to placate America and try to salvage something here. But they will be, and should be, reluctant. And I honestly don’t see a situation where the other parties agree to this. I feel they’ve now been put in a position where they’ll have to see how powerful an Iran they can live with.

(Honestly, we might be past the point where Russia would have anything over Iran, or even anything to offer. Iran could soon be the more powerful player in this, what with their energy power and warm water access. I’m not sure how that plays out vis a vis JCPOA, but it is interesting.)

Yeah, that’s exactly what Trump is going to do. Come on. Even if this move didn’t undercut any attempt at anti-clericism (which would be great), there is zero chance that Trump is going to “fight for Iranian freedom.” Bolton doesn’t even pretend to care about that stuff.

This isn’t like with Wolfowitz, who flawed though he was, genuinely seemed to want Iraqis to be liberated from the monstrous depredations of the Hussein regime. These guys don’t care about human rights. Bolton, Mattis, Pompeo: they see the world through a lens of conflict.

It’s nice thinking by Lake, of course, but it isn’t going to happen. This justification has no basis in reality.

But within Trump’s orbit, the president was cheered for following through on something he vowed to do as a candidate. In a statement designed to use the foreign policy announcement to galvanize Trump’s supporters, campaign manager Brad Parscale said, “Over and over again, President Trump has proven that a promise made is a promise kept.”

This is the worst one. He promised to do something very, very dumb. If he promised to name a horse Secretary of State, marry Ivanka, and proclaim her the Goddess-Queen of New Trumpmerica, it wouldn’t be positive mark in the ledger if he went through with it.

But really, that would be no dumber, and probably less destructive, than this.

(Tomorrow we’ll look more closely at the regional implications of this, if the “region” is expanded eastward to China and north to Russia, which really, it should be.)

5 thoughts on “Anti-JCPOA Arguments: Should The US Violate Treaties?”