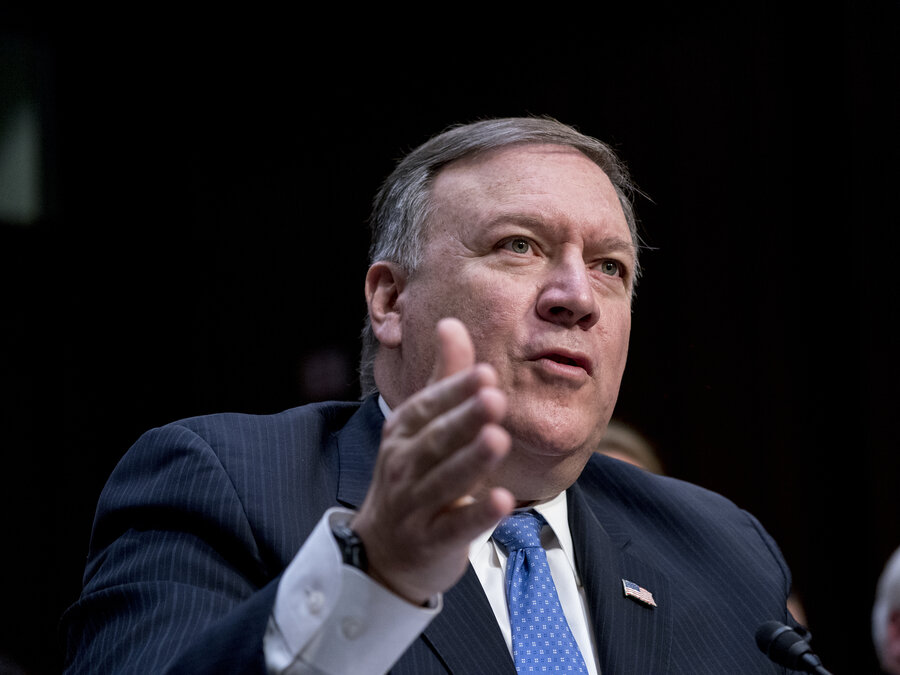 Seriously, like two years ago this guy was a garden-variety Tea Party nobody.

In a speech yesterday, our Secretary of State, the terrible Tea Party Christianist bigot Mike Pompeo, presented his idea of diplomacy in the aftermath of the United States’ violation of the Iran deal: colonialism.

In essence, Pompeo told Iran that they would be faced with the most devastating sanctions in human history if they didn’t comply with his list of 12 demands. This, on its face, was nonsense. After all, they already faced terrible sanctions, which is why they gave up their nuclear program and agreed to a hugely invasive inspection regime.

But even more so, in order for that to work, the EU, Russia, and China would have to be on board with this. And so far, it is far from clear they will be. The EU is already saying they might protect firms hurt by US sanctions, which they absolutely should. US leadership doesn’t mean anything if we violate our agreements and then demand our allies support us.

And Russia and China? Please. Russia’s whole goal is to make this a post-US world, and separating us from Europe is a big part of that. Trump and Pompeo just handed them a huge gift. China isn’t trying to separate us, as much as make themselves far more relevant, and our rush toward empurpled irrelevance is extremely helpful.

But beside the unreality of his claims, it was Pompeo’s demand that really showed just what kind of people the administration is. I’m going to paste them in full.

Some of these are extremely worthy. Some are insane (give up even their nuclear energy program?). Some are wildly hypocritical, like the demand to stop supporting the Houthis while we’re arming the Sauds in their genocidal war. It’s not that it is unworthy, but it is not exactly an ask backed by any moral authority.

But the point-by-point isn’t as important as the project taken as a whole. In essence, they insist that Iran stop trying to be a power in the Middle East. This isn’t just hyopcritical; it is colonial. It is demanding that Iran go back before the revolution, when they were a vassal of the west. It is demanding that the Middle East be ruled by America, who gets to decide who is the power and who isn’t.

I can’t state how wildly self-defeating this is, not just in Iran, but in the broader Middle East (Gulf Arab states not included). I talked about why a while ago, but think it is important to re-up.

It’s madness and fallacy to think that the Iranian regime, or really, any post-Shah Iranian government, would enter into any agreement that lessens their regional power and increases that of the West. To believe that is to have zero historical understanding, of the near or the distant past.

The Iranian revolution wasn’t about Islam, or not entirely. There was a mix of anti-imperialist leftists, communists, other various secularists, religious types who didn’t want clerical rule (which remember, is what Khomeini first promised) and non-ideological nationalists who were just tired of western interference.

Western Europe and Russia had eclipsed Persian power in the region in the late 1800s, but it wasn’t until oil that the West really started controlling what was happening in Iran. Lopsided deals with venal flunkies gave England and then America a dominant role in the expropriation of Iranian resources. Shahs got rich, the west got rich, and most Iranians stayed poor. The same thing happened in Iraq, Saudi Arabia, etc.

Western colonialism in the Middle East was a 20th-century phenomenon, which in our lifetime seems like all of eternity, but was really a blip. It was a terrible one, from the perspective of the inhabitants, of course. It was dirty and condescending and venal and greedy and grubbing. It was literally crude. Khomeini wasn’t just deposing a shah for the sake of Islam: he was kicking out the west for the sake of Iran.

That’s the heart of this. Iran, after a low and brutal, but historically brief, interregnum, is trying to reassert itself in a changing and fluid Middle East, still reeling from the collapse of the Ottoman empire and the perversions of 20th-century colonialism and nationalism.

To demand that they shouldn’t do this is breathtakingly arrogant and essentially colonialist. It’s saying to these dirty Persians that they should probably do what we want or else it would be a shame if we had to destroy your country. Grovel, or be brought low. One way or the other, on your knees.

The stupidity and venality of this is overwhelming. It brings us back to the days where we’d sign treaty after treaty with native nations, and then break them, running roughshod over their land, simply because we could. Because we had the power.

It’s no different. After treaty-breaking our way across the continent, we expanded worldwide, treating distant locals the way we treated the nations in this land. In the last generation, the world sort of accepted that this wasn’t the way to do things, that smaller countries had rights as well.

The US never really believed that, but certainly paid tribute to virtue (Russia was more or less the same, minus the tribute). This is nothing but the bad old days again. To assume that Iran will accept this is madness. To think that they should is arrogance. To think that they will, in the age of Trump, an ascendant China, and a swaggering Russia, is blindness.