Last night, it looked like we were about to plunge into the new and most dangerous phase of a constantly-mutating series of wars in the Middle East. Over a tense few hours, Iran and Israel exchanged strikes, in what was either a display of signaling or a sign of things to come.

Or, of course, both.

Israel carried out widespread deadly raids against what it said were Iranian targets in Syria on Thursday after rocket fire towards its forces which it blamed on Iran, marking a sharp escalation between the two enemies.

I know that yesterday I said today’s post would be about the medium-and-long-term ramifications of the US announcing it was going to violate the JCPOA, but events, as we see, quickly overtook long-term thinking. They have a way of doing that.

So what do these strikes mean? Since, as of this writing (around 1:00 CST), there haven’t been further significant exchanges, we can begin to hazard a few guesses, knowing all the while that predictions only serve to make you look foolish, and bland gamesmanship is grotesque when real lives are on the line.

So to do a quick recap of last night’s events: Iran, shortly after announcing that it would abide by the JCPOA, but making clear that could change if the European signatories changed their tune, launched rockets at Israeli positions in the Golan Heights, which has been occupied by Israel since the ’67 war.

Israel retaliated, claiming to take out “nearly all key Iranian military targets in Syria”. The reason for this significance isn’t just that Israel was attacked; that is common. But up until now, it has been through Iranian proxies, such as Hezbollah. This was the first actual Iranian strike, and the first time Israel has attacked Iranian forces/infrastructure directly.

So…does this mean war? Right now, it looks like it doesn’t. Indeed, on the surface, it looks like Iran swaggered, and Israel punched back, demonstrating clear power, forcing Iran to back off. That might be the case. This may have been a little bit of eagerness, a few punches thrown in the chaos of war, before both sides backed down.

But it is impossible to ignore the timing, and we shouldn’t ignore it. This came just a day after the US violated the JCPOA, and Iran was clearly signaling something. But what? It is weird, because, as we argued, Iran was trying to show itself to be the rational, reasonable player here.

The upshot is that the European countries in the JCPOA have to choose between an Iran acting all pious and responsible, and the United States, which Iran is painting as essentially a rogue state. That Iran, itself a very, very bad actor, is able to do this is because, between this and the Paris Accords and a million other pointless acts of dumbshow hostility, Trump is handing them a brush and the paints, and saying “I am a rogue state. Paint me like you do your French girls.”

Super-relevant and contemporary references aside, this seems to go against their strategy. But I don’t think it really does. What Iran seems to be doing is to show that they can still cause a lot of trouble, and have no incentive not to if they are sanctioned again. They’re trying to show Europe that there is a lot more to lose by alienating Iran than by going against Donald Trump.

In effect, they are playing the good cop and the bad cop.

Was it effective? Maybe. Israel’s response showed that Iran might not be ready to take on the West, of course, though no one is under any illusion that a war against the regime would be swift. They are clearly willing to take enormous chances, even dumb ones. But the enormous fear of war yesterday might have clarified some minds.

The question is, did it clarify them against Iran, or, if not for Iran, for the JCPOA status quo? For Iran demonstrated again that it is a pretty bad influence in its neighborhood. But then, if it will be acting worse without Eurpoean partnership, if it shows that it can and will unleash hell if the other partners violate the treaty, will that give Europe more of an incentive to stay in?

I honestly don’t know. I have a feeling we’ll return more or less to the status quo, but it’ll be balanced this time on a knife’s edge (the old one was as well, but a thicker, duller knife. Maybe one of those cheese ones? I’m not really a knife guy). Iran sort-of flexed and Israel absolutely did, and the world, took fright. Maybe, they think, the world can live with Trump feeling like he did something, and hoping his attention wanders.

The Overlapping Wars of the Middle East

That might work, but there are so many factors in play, it is hard to figure out. Even if you just (“just”) look at last night’s battlegrounds, you’ll see the knot of Gordian Knots one would have to untangle.

Iran didn’t shoot rockets into Israel, per se, but Israeli positions in the Golan Heights, Syrian territory which it has been occupying since 1967, when it drove back a theoretically-unified Arab attack. This land is de facto Israel, but is still legally part of Syria.

But as we have been asking through the life of this blog: does Syria even exist anymore? Iran is basically supporting the barbarous Assad government in order to set up a rump Hezbollah state in the south, a sentence that isn’t going to go on any positive ledger of Iranian deeds. Assad himself only controls a limited amount of territory, and of course, that is being carved up by his ostensible allies for their regional goals. 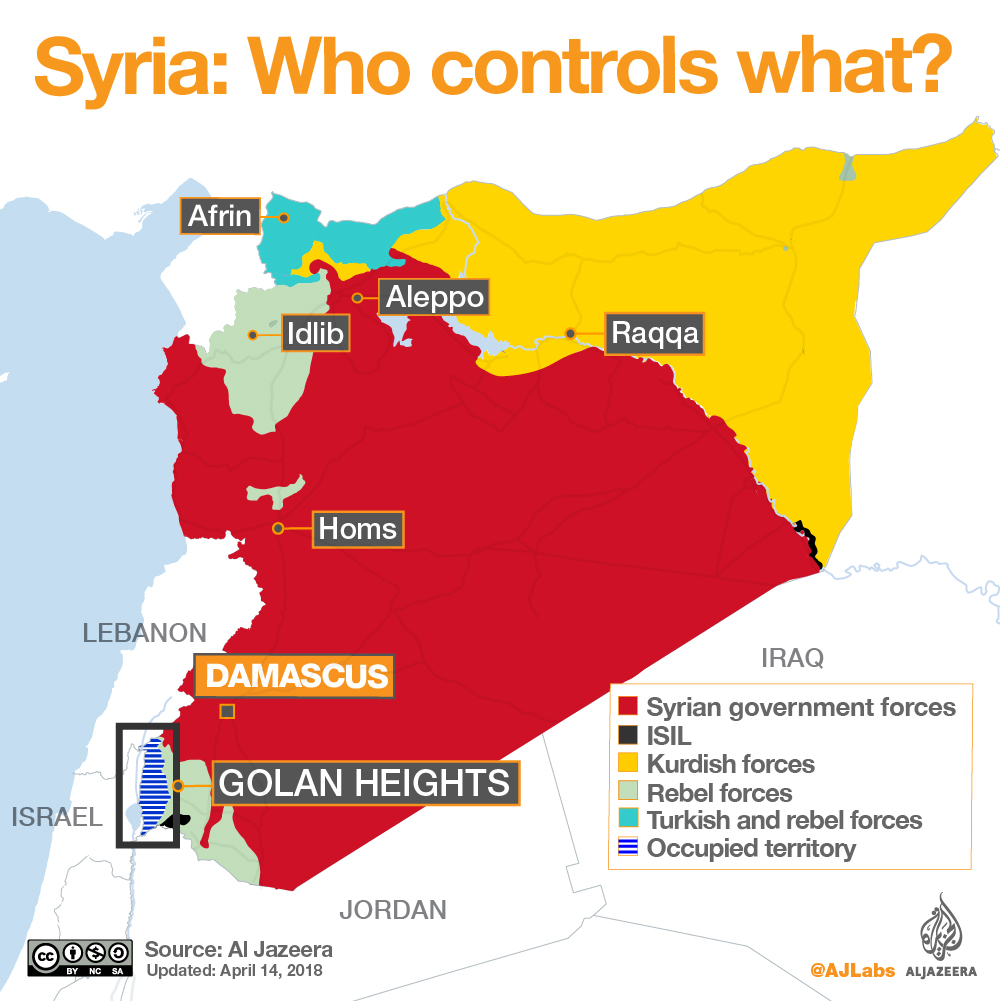 So you have one occupying power fighting another essentially occupying power, over land that is in theory a country, but probably doesn’t really exist. And when I say “over land” I mean that in the literal “bombs and planes go over land” sense; no one was trying to gain territory for this. Syria is just the staging ground, the battlefield for broader ideas, which is essentially the motto and the tombstone-carving for this decade.

You have in this area as well Lebanon, which just had its first election in over a decade, and is trying to carve out a way to survive an exploding Syria. That it hasn’t fallen apart yet is something of a miracle. Jordan is in this same boat. Refugees still threaten to upend these delicate political balances, and now there is another new deadly factor in the mix.

But there’s more. The old ideas of who is on the side of whom have shifted.

The US, Bahrain, Saudi Arabia, Britain, and the United Arab Emirates all agree that Iran is the aggressor in attacking Israel, some Gulfies going as far as defending Israel's right to defend itself. Welcome to the New Middle East.

So we have new alliances. We have old countries falling apart. We have Iran siding with old enemies in Britain and Russia and maybe a new partner with China. We have a United States that lurches between disengaged and belligerent, led by a moron. And this is all an outcome of, and being played on the backdrop of, the 100-year shift away from the Ottoman Empire.

We’ve been watching this play out for most of this century, after the stagnation of the Cold War ended and new forces were unleashed. And now we have Iran with a different calculation, which, given their history and own internal politics, will probably end up being anywhere from “tolerably bad” (from the comfort of the west), to catastrophic.

I don’t think Iran is going to implode like Syria or Iraq or Yemen. I think that while there might be political instability right now, history teaches us that Iran itself is stable, and will continue to be a power. Indeed, Iran and Israel might be the two most stable, coherent, and in a sense real countries in the area, with maybe Turkey thrown in.

They are also the most powerful. They are also the most ideologically-driven, Iran endemically so, and Israel still gripped by Bibi-ism. This is a incredibly dangerous chemistry experiment, a jumble of compounds thrown into a beaker and shaken up, labels unread and measurements untaken, with no stopping point until it shatters.

We’ve just started this new experiment this week. There’s no way to tell how it’ll turn out.