It seemed almost inevitable, as the students of Marjory Stoneman Douglas High found their voice through pain and grief, as they responded with anger and frustration to the ritualistic banalities that follow like vultures after American bloodshed, and as they began to name names, that there would be a backlash.

It was impossible, in our day, to think that survivors of a massacre would have some breathing space without facing fierce retribution. It was impossible to think that activism in the face of tragedy would go unpunished. We all knew, as the horrible week turned into the weekend, and as they mobilized and gathered momentum, that they would soon be in the cross-hairs of the right.

We know why: they do have moral authority, they aren’t afraid, they don’t want to mouth the numbing “come together” catchphrase, and they are damn good at organizing. They are calling the NRA and its enablers on their murderous bullshit, and that’s terrifying to wingers.

So the backlash was coming, but I wasn’t quite sure which form it would take. It was clear that some assholes would continue to be assholes… 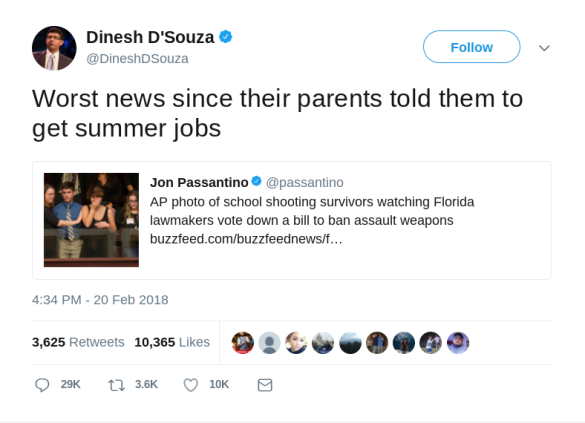 Or, I don’t know, the news that their friends were being gunned down in the hallways next to them was probably pretty bad too…

…but for the most part, even wingers didn’t want to openly mock these kids. So they settled on some kind of rough consensus, based around two points. One of these was cruel, if understandable and plausible, and the other, well…

This is, sadly, not a joke.

Kingston was on the program to discuss a controversial tweet in which he claimed it is implausible that high school students who survived a brutal massacre last week were capable of organizing nationwide rallies for gun control on their own. During the show, Kingston argued that the teenagers are being manipulated by left-wing anti-gun activists funded by Soros.

Kingston isn’t alone; that idea has spread throughout the right-wing noise machine. It’s worth for one second pointing out the obvious flaws with the first part, that it would be impossible for these kids to organize: they are organizing online. They picked a date for walkouts and other activities, and blasted it out, where it got amplified.

If all of the sudden, a few hours after the shooting, they had, like, a ballroom booked for a huge Anti-Liberty Bash, with speakers and caterers and a band (Jefferson Starship, who love America but could still use the gig), then maybe one could see that this was somehow planned. But this is online activism. It is bizarre that the right wing, whose online infrastructure amplifies genuinely dumb people like Mike Cernovich, can’t imagine this kind of organizing possible.

What’s more quintessentially disturbing than that garden-level hypocrisy, though, is the Soros angle. Because it isn’t just that something bad is happening: it is that there is a deep conspiracy there, and that these children are being manipulated by a bogeyman.

I don’t know if Kingston actually believes that Soros is behind it; I don’t know him well enough to know if he is a believer, an idiot, a manipulator, or some kind of cognitively dissonant combination. I assume it is mostly the last one: the movement he is a part of uses conjuring words like Soros to alchemize anything they don’t like into conspiracy.

This is dangerous: Kingston (or whomever) can say something blithely, knowing it will play. It’ll be repeated by a few people who may or may not believe it, but most likely don’t know/don’t care if they do. Then it filters down into the sucking swamp of social media and its outlets, before filtering back up to FOX, and reverberating between the two.

Soon, you have a full-fledged Idea, and more than that, an Article of Faith. It becomes the hardened narrative, because it explains away inconveniences and ideas that threaten to pop the bubble. It ties everything into a pinched and paranoid worldview.

There has always been this thread of American life, but it rarely has power. And right now, it has power, but from above (our deranged idiot of a President) and from below (the wrathful writhe, plugged into radio and the internet and FOX). We see it bubble into real life with GOP laws, and in bursts of violence like with Pizzagate. As I said then:

It isn’t so much about ideology, as it is about a general agreement that’s breaking down. There isn’t just one world, with a solid ground on which people can construct their narrative if they want. There are many worlds, crashing into each other, remolding each other, and creating something we don’t understand. There is a plasticity to reality, which isn’t the objective real world, with its hunger and death and rising oceans, but an idea. And that idea is breaking apart, which puts the real world in more peril.

There’s nothing new in these thoughts, but I don’t think we’ve quite accepted the ramifications of what is happening, because I don’t think we can even fully word it yet. It’s a confluence of social media echo chambers, an atomized world that paradoxically has access to more information than at any other time, constructed narratives over real horrors, a melding of the fact and fiction and factless reality we see on our screens, and a world where the old gods have been largely killed and nothing, not even a rough beast, slouches toward rebirth. You see it in the ravening purity of ISIS and swampy denizens of the alt-right. You’ve seen it growing in phony televangelists and hippie cult leaders and dictators blaring over the radio. You see it in the most powerful man in the world, who is entirely artifice, a preening inch-deep nothingness. You feel it in the ground beneath your feet, shaking.

I argued, as have so many others, that democracy can’t survive such competing realities, but I think it is deeper than that. I think democracy amplifies those tendencies, and as democracy breaks because of them, the paranoia and fear get worse, enabling terrible behavior. It might be that we can’t survive democracy.

This is clear, I think, in the non-classified Worldwide Threat Assessment of the US Intelligence Community, published earlier this week. In it, they accept of course the reality of climate change, and the reality that it is dangerous to global security (non-arable land, people forced into megalopolises, disease and unrest, etc). We know that environmental catastrophe can enable war.

But there are many people who don’t believe that, or who don’t believe there is a problem with the climate at all. Some are paid not to believe it, some don’t want to because it “triggers the libs”, many don’t because they’ve been told that it is a liberal hoax by the first two groups, whose own cognitive dissonance puts them on the side of Faith.

All of these people are in power.

The Threat Assessment (put out under the name of Dan Coats, a Trump appointee), recognizes this, in a sentence with curdling resonance:

Challenges from urbanization and migration will persist, while the effects of air pollution, inadequate water, and climate change on human health and livelihood will become more noticeable. Domestic policy responses to such issues will become more difficult—especially for democracies—as publics become less trusting of authoritative information sources.

That’s right: the intelligence community is basically saying that distrust of information–that is, the idea that everything you don’t like is a hoax–will make it nearly impossible to face the real threat of climate change. That is, our own broken tendencies, which go beyond our politics (though are reflected in them), are literally endangering the world.

Even as you read this, even as I type it, you can hear the response: the intelligence community is part of the Deep State conspiracy against Trump, so what it is saying is automatically a lie. For the paranoid, this doesn’t even have to be verbal: the uncontroversial idea that a lack of arable land can lead to shattering competition for scarce resources is immediately transubstantiated into an all-encompassing Lie.

This ability (which is present across the spectrum, but only one side has enshrined it into policy, and only one side elects people who are its pushers and buyers) is world-breaking. It is more than dangerous for our democracy, and indeed, it might be too late to fix that, but it is a global threat.

We can and should explore this a lot deeper, especially how it ties into Russian disinformation campaigns in the West, and why America is susceptible to them, and the nexus between money laundering and the professional conspiracy-mongers. There’s a lot there. And now I know I sound paranoid, but that’s sort of the point.

The ground under our feet is opening up, and there is nothing to grab onto, but that’s an illusion. The real world, full of hungry people, riddled with violence, with its old geopolitics breaking up, is still there. There are billions of humans, and a vast and unconcerned climate, that need to be reconciled.

America, though, has lost our ability to deal with it. Indeed, our howling madness is making everything worse. We’ve more than given up our leadership; I don’t know if we have an ability to lead at all.

We expanded across a continent, and were held together briefly by an idea, and by innumerous compromises and contradictions, by shared hypocrisy and some burning ideals, but now we’ve snapped. The faithless have created a new faith, one that worships a mass of roiling snakes, incoherent and writhing, hissing and biting. They stick their arms into it and bring out the poison, yapping and carnival-barking, whooping in their blood and war-paint. It’s their country now, and the rest of the world can only shudder.

2 thoughts on “A Crisis of Faith: Parkland, Climate Change, and How American Paranoia Can Shatter the World”