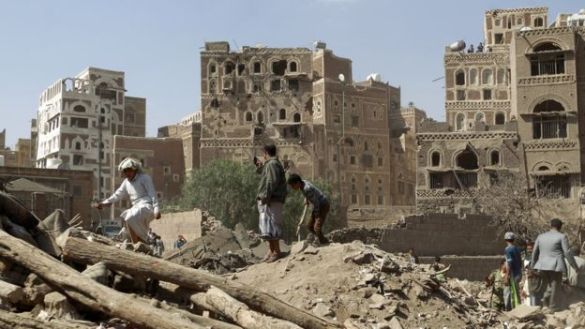 Remember that things can somehow always get worse. Image from BBC

One of the great frustrations on writing about Yemen was that the bulk of the foreign policy world saw Yemen as just a place for al-Qaeda, or as a piece on the larger chessboard. They didn’t see it for the country it was. And I don’t mean “They don’t know its great food, man!” (I don’t expect granular humanity from big-picture people, nice as it may be), but that they didn’t understand how to operate in Yemen qua Yemen.

This mattered because, in any country, you won’t make smart policies if you don’t understand internal dynamics. But it was especially true in Yemen, which has for most of the 20th-century been a battleground of ideologies and a place for proxy wars. And no one who has come in, whether it has been the British, the Egyptians, the Russians, and now the Saudis, has left in great shape. Because they all see Yemen as just a playing field, and not a country. So it was very frustrating to see US policymakers making the same mistake.

This wasn’t universal. I think the Obama administration, by relying on drones and Special Forces, attempted to be small. But even that was policy from a large remove, and the whole “treat Yemen just as a place to kill al-Qaeda” was inevitably going to backfire.  Still, there were some attempts to work with Yemen, which is why the previous Administration largely deferred to the weak government of  Yemen when it came to having troops on the ground.

The new administration does not. And as a result, US forces may longer  be allowed to operate in Yemen. It isn’t a direct result, of course, but the path was set: following the raid against AQAP last week, in which nearly a dozen civilians were killed after faulty intelligence and bad luck led to a prolonged firefight, the Times reported this morning that the government of Yemen withdrew “permission for the United States to run Special Operations ground missions against suspected terrorist groups in the country, according to American officials.”

This was later hedged upon, though.

The officials said that after an “interagency” effort to reassure President Abdrabbuh Mansur Hadi, they have confidence that military action in Yemen targeting al Qaeda in the Arabian Peninsula — which would include air and drone strikes — will continue.

The State Department pushed back against reports that Yemen had requested a suspension of American antiterror missions on the ground, noting that Yemen’s foreign minister had denied it.

Still, cooperation is already fraught. It’s unclear if the insane and self-defeating travel ban played into the decision, but there is little doubt it has led to consternation and outrage in the affected countries, and beyond. (See for example Rukmini Callimachi’s twitter feed from the liberated parts of Mosul. It’s all anyone is talking about–including ISIS).

I think it is pretty clear that this is no coincidence. While there are dedicated people in State and Defense, both in Washington and on the ground, policy (though not strategy, generally) is decided at the top levels. And the wildly unqualified Trump is led by the wildly unqualified Steve Bannon, and the qualified but possibly certified Michael Flynn (who seems obsessed with slights and with a messianic and apocalyptic vision). These are people who want to dominate and run roughshod over enemies, which are Muslims.

Because of that, Yemen = AQAP, and to an extent, ISIS (I don’t expect the rivalry between the two to get much consideration in the highest quarters). Don’t look for much political coordination or cooperation, and don’t look for the administration to treat Yemen as anything other than a battlefield in a one-way relationship.

But Yemen is more, and also less, than AQAP. I think the Trump team sees it as a gateway to Iran. They seem to have internalized the message that the Houthis are essentially Iranian agents doing Iranian bidding (something the Saudis, who aren’t on the list, also seem to believe). That the Houthis could have any autonomy, or might be fighting due to Yemen’s own history and their group’s own struggles, was largely alien to the Obama administration. It doesn’t seem to even be a consideration here.

From the Intercept: this may seem small, but it is telling.

The White House press corps wanted to know what being put “on notice” entailed, and Spicer responded by claiming that Iran’s government took actions against a U.S. naval vessel, which would be an act of war. “I think General Flynn was really clear yesterday that Iran has violated the Joint Resolution, that Iran’s additional hostile actions that it took against our Navy vessel are ones that we are very clear are not going to sit by and take,” he said. “I think that we will have further updates for you on those additional actions.”

That could be a slip. Spicer probably doesn’t know the Houthis from a hole in the ground. But somewhere, in his own briefings, the Houthis were inextricably linked to Iran, and somehow their attack on the people that have been bombing them for years was interpreted as an attack on the US. Spicer just said it out loud.

Remember that earlier this year, before his inauguration, Trump claimed that Iran “took over” Yemen, which is based on absolutely nothing except a Iran-blinded worldview and ignorant, self-reinforcing paranoia.

Remember, too, that it was just a week that Flynn and Trump said they were “officially putting Iran on notice,”  as if that was an official designation. But the intent was there: they want to rough up Iran.

(In our prior Yemen post, noted brogue-haver John Cleary wisely asked how this belligerence squared with the administration’s pro-Russian stance, Russia and Iran being allies. Short answer is that it depends on how you feel about Trump’s strategy: it’s either ad hoc or well planned. Long answer coming in a post on Friday.)

In this, Yemen will be their proxy. They clearly have been cozying up to Saudi Arabia, tying themselves in knots to explain how the Kingdom isn’t a source of terrorism but a trusted friend, and that Iran is the source of all evil, and that the nuclear deal is basically Munich (of course, everything is Munich to these goons, but this is like Supermunich). So the Houthis will become the enemies, because I honestly think they see a huge war against both Iran and radical Sunni terrorism as not just inevitable, but necessecary.

(Whether Trump himself believes it is hard to say, but he clearly likes being positioned as a world-historic strongman.)

So when you read about Yemen, understand that this administration doesn’t see it as a country. They see it as a battleground for fighting their ideological battles. Let’s hope they can pull back, or else Yemen will be a graveyard for another major power, and its own misery will continue to increase.

Postscript: Please don’t take this as a romantic look back at the Obama years. I spent the bulk of my professional career talking about what the admin did wrong in Yemen. It’s just that I think these guys will be exponentially worse.