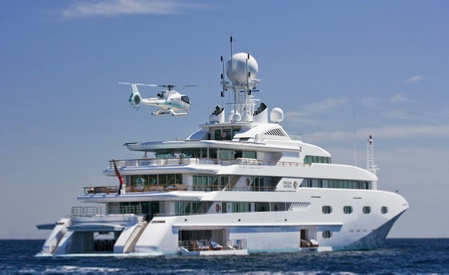 This is the yacht future king Mohammed bin Salman bought last year for over $300 million.

To say the Saudi line of succession has been sclerotic is to underestimate the ravages of sclerosis. It has barely been a succession, as far as we usually understand it, as the kingdom hasn’t moved forward a generation since Ibn Saud kicked it in 1953: it has just been a series of his sons, a bunch of dyed-bearded princelings handing the crown sideways to each other for 60 years. There’s been more dynamism in the staid permanence of Queen Elizabeth.

But that had to change. As prolific a progenitor as Ibn Saud was, eventually he was going to run out of sons. The current occupant, Salman, was one of the last born, in 1935. He’s 81 years young, and just yesterday announced one of the bigger shakeups in Saudi Arabia’s brief history.

King Salman of Saudi Arabia promoted his 31-year-old son, Mohammed bin Salman, to be next in line to the throne on Wednesday, further empowering a young, activist leader at a time when the kingdom is struggling with low oil prices, a rivalry with Iran and conflicts across the Middle East.

The decision to remove the previous crown prince, Mohammed bin Nayef, 57, comes as some members of the royal family have chafed at the rise of the younger prince, who emerged from relative obscurity when his father, 81, ascended the throne in January 2015.

So whence the trigger for this move? Well, there are competing reasons.

The first is that bin Nayef might have fallen slightly out of favor due partly to the weird diplomatic attack on Qatar. That’s probably unfair to him, since they were given a tacit (and then essentially explicit) ok to do so from Donald Trump (which is a sentence that will never seem like it makes sense: “Wait, the guy from The Apprentice?” It sounds like a dispatch from Bizzaro World, which, I suppose, it is).

Despite Trump’s deeply unserious and self-praising blundering, the State Department yesterday came out strongly against KSA and UAE, with some deeply undiplomatic language.

On June 20, the State Department issued a statement that was perhaps the strongest criticism of Saudi Arabia and the UAE in recent memory. In response to Saudi statements about having proof of Qatar’s terror financing—an issue that historically has been a real concern for all GCC countries—State Department spokeswoman Heather Nauert said the U.S. was tired of waiting for the proof: “Now that it’s been more than two weeks since the embargo started, we are mystified that the Gulf states have not released to the public, nor to the Qataris, the details about the claims that they are making toward Qatar.”

She went on to add that the “more that time goes by, the more doubt is raised about the actions taken by Saudi Arabia and the UAE. At this point, we are left with one simple question: Were the actions really about their concerns about Qatar’s alleged support for terrorism, or were they about the long-simmering grievances between and among the GCC countries?”

That hurts. Neither country is very good at dealing with criticism, and they generally react poorly. Still, though, their heavy-handed nonsense, which only served to empower Iran and Turkey, might have been the precipitating factor, but it clearly wasn’t the only one. This is less about bin Nayef, who has long been the crown prince of American foreign policy hearts, and more about bin Salman. The Soufan Group explains:

Perhaps one element of the king’s announcements that may have caused surprise was their timing. But with the Saudi-led campaign against the Houthis in Yemen attracting wide support in the kingdom and throughout the rest of the Sunni Middle East, where it is seen, rightly or wrongly, as a long overdue and muscular retort to the growth of Iranian influence, this was a good time to promote Prince Mohammed bin Salman. As minister of defense, Mohammed bin Salman has been presented as the man in charge of the air campaign and the architect of what may be seen as a rare Arab military success. It is likely that the impact of the campaign has now peaked, with little more to be achieved against a relatively powerless neighbor without a far more tricky and uncertain ground operation; the elevation of Prince Mohammed bin Salman may therefore have caught his popularity on the flood.

Yup. That’s pretty much the long and short of it. Bin Salman was barely known before the war against Yemen, or against Iran, started. But he quickly won favor with a stirring series of military successes based entirely on indiscriminate carpet bombing. It got so bad that the US Congress intervened on arms sales to Saudi Arabia, briefly.

Now, of course, the floodgates are opened. Team Trump sees Yemen as an “area of active hostilities”, wiping away even the pretense that Yemen was a humanitarian situation more than a war zone (and, to be fair, Obama barely kept up even that pretense). They look at Yemen, and see a spot for ISIS and AQAP, but mostly they see Iran (and probably conflate the threats).  And so the elevation of bin Salman, who is perhaps the strongest Sunni voice for anti-Iranian belligerence, sees his kinghood at least temporarily assured.

One can’t blame this entirely or even largely on Trump or on the United States, of course. The rivalry has been brewing for decades. Centuries, really, but not being strict determinists, we’ll look at the political battle between Saudi Arabia and Iran from a contemporary geopolitical lens. It’s the “big war” in which all the little wars are fought.

It’s a cold war which is getting hotter, and proxies are not being added as much as adopted. The war in Yemen would have happened without Saudi and Iranian interference; indeed, they more or less just chose sides, Iran more so because everyone already thought they did, and so had to save a little face. Syria, same. So every generational conflict is now being subsumed into this big war, which amps up the carnage and lowers the chance of any kind of decent revolutions for decades.

For an example of how this can spiral out of control for generations, look at how Afghanistan’s internal strife hasn’t stopped since it got further ground up in the abattoir of US/Soviet politics. And we only had like 30 years of hating each other at that point.

Yemen’ agony is unbearable. The nation “on the brink” for 10 years has fully topped over. It will never be whole. Famine and disease will wreck it. Bin Salman is not its only oppressor. These wars have been brewing and exploding through avarice, short-sightedness, and petty politics. But he is most responsible for the sheer reckless destruction and degradation of anything resembling a functioning state. And now that has been elevated. This war, both big and small, is just getting started.

6 thoughts on “Mohammed bin Salman, Murderer of Yemen, To Be Next Saudi King”