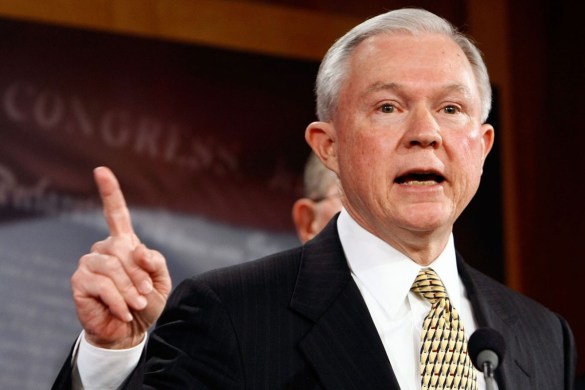 Jeff Sessions is a white nationalist who is about the be super-empowered to protect Trump’s worst impulses. Senate rules make that rude to say.

Now, who in the party of Ted Cruz is down for a little good ol’-fashioned comity?

Senate Republicans voted on Tuesday night to silence Elizabeth Warren for reading out a letter from the widow of Martin Luther King during a debate over Senator Jeff Sessions’ nomination for attorney general, eliciting furious response from Democrats.

Speaking on the Senate floor, Warren quoted from 30-year-old correspondence from Coretta Scott King relating to Sessions’ failed judicial nomination in the 1980s. It was part of a barnstorming speech by the Massachusetts Senator against Sessions’ suitability for the post and attacking his record on civil rights.

Mitch McConnell, the Republican majority leader, objected that Warren had broken Senate rules that prohibit one member impugning the conduct of another. Senators then voted 49-43 to uphold a ruling in McConnell’s favour.

And it’s true! Sen. Warren was in violation of “Rule 19”, which as we all know forbids the criticism of another Senator. The relevant section forbids them from“directly or indirectly, by any form of words impute to another Senator or to other Senators any conduct or motive unworthy or unbecoming a Senator.” That’s right: it’s not about actual conduct unbecoming of a Senator, but imputing that they may have acted unbecomingly. (That’s why you always hear them say things like “My esteemed colleague and good friend from the liberal nightmare state of Taxechussets is a fine and upstanding fellow, but he wants babies to be smothered into a slightly-less-expensive paste.”)

None of that tip-toeing from Senator Warren, though, because the debate they were having wasn’t about whether Jeff Sessions the Senator, but about Jeff Sessions the horrifying nominee for Attorney General of the United States. The Republicans are using their majority to invoke a rule in order to shut down debate about a nominee for a crucially important position because the nominee happens to have been elected by the good people of Alabama.

By that logic, of course, if Wyoming went nuts and sent a horse to the Senate, a la Caligula, and Donald Trump liked the cut of the horse’s jib, and nominated him for Secretary of Defense, Democrats couldn’t point out that this was, in fact, a horse.

Sessions is a considerably worse pick than a horse.

We know the greatest hits–joked about the Klan, called a black colleague “boy”, used the strictest and most absurd reading of a law to prosecute people who were trying to register black voters (while letting white groups who did the same thing unmolested–and those in and of themselves are damning. They were in 1986, when Ted Kennedy and Coretta Scott King spoke against Sessions (the comments Sen. Warren was reading).

But of course there is more. Sessions is famously one of the first major political figures to side with Trump, and it isn’t because he loves New York glamor. Sessions has been an open white nationalist in the truest sense his whole career. His program has been to gut the Voting Rights Act, end immigration, and diminish the role of civil rights in order to solidify white political power. Donald Trump was the vessel for that.

Sessions is a major figure in the white nationalist movement (even if he isn’t giving speeches to the Council of Conservative Citizens, there is a reason why they all like him). He’s a favorite figure of Steve Bannon, and the alt-right, as Alabama.com reminds us.

In an email in response to a request from The Washington Post, Bannon described Sessions as “the clearinghouse for policy and philosophy” in Trump’s administration, saying he and the senator are joined at the center of Trump’s “pro-America movement” and the global nationalist phenomenon.

“In America and Europe, working people are reasserting their right to control their own destinies,” Bannon wrote. “Jeff Sessions has been at the forefront of this movement for years, developing populist nation-state policies that are supported by the vast and overwhelming majority of Americans, but are poorly understood by cosmopolitan elites in the media that live in a handful of our larger cities.”

He is considered a top part of the Trump braintrust, such as it is, including with Trump’s rich son-in-law. “Then there is Jared Kushner, the president’s son-in-law and senior adviser, who considers Sessions a savant and forged a bond with the senator while orchestrating Trump’s trip last summer to Mexico City and during the darkest days of the campaign.”

In short, as Alabama.com says, “Sessions’ ideology is driven by a visceral aversion to what he calls “soulless globalism,” a term used on the extreme right to convey a perceived threat to the United States from free trade, international alliances and the immigration of non-whites.”

Remember: this is the man who will be in charge of not just enforcing laws, including Civil Rights legislation, which he hates, but will be the most important person when it comes to checking Trump’s latent authoritarianism. And it is the racist, authoritarian parts of Trump’s platform and persona that Sessions likes the most. It’s why he aligned himself with Trump. They are the parts that Sessions himself helped create.

But of course, none of that can be said, because of archaic and selectively-enforced Senate rules. You might wonder why Mitch McConnell and the GOP even care abot what Warren has to say. After all, they have the votes. Sessions will almost certainly go through. So why give Warren the publicity and make a martyr out of her?

It’s because in their weasel souls they know that Sessions is a nightmare, and the worst possible pick for AG other than maybe Kris Kobach (though my money is still on Sessions). They don’t want him openly debated. They don’t want his actual record discussed. They don’t want it in the light. Because none of them will have the courage it takes to vote against him, and so making their racist-enabling perfidy clear is morally terrifying.

This is what these Senate rules are for: the hide the beasts, to cover up the tentacles flicking and grasping greenly from behind the rattling closet door. It’s so craven Senators won’t have to own up to the monsters in their midst, and in doing so, to the monsters in their own souls. It will enable the rise of Jeff Sessions, and that will finally lay waste to any lingering claims made by the Party of Lincoln.