This woman stared unflinchingly at evil and made us all look with her.

Like most people in Chicago, I for years thought Balbo Drive, a short street on the south end of the Loop, running from Printers Row and intersecting with history at Grant Park, where hippies and cops clashed in the street in 68, and where, 40 years later, our first African-American President celebrated his election, was actually called Balboa Drive. That’s how I always pronounced it, and almost certainly spelled it. That is to say: I didn’t think about it at all.

Learning (or remembering) that it was actually called Balbo marked the end of my concern for the street, except for always consciously marking the lack of a Rocky-ifying “a” in the middle, in the same way I mentally make an “L” with my thumb when turning left or think about Alison Milnamow when spelling “their” (don’t ask). Even for someone as interested in Chicago history as I am, it seemed unimportant.

That changed in the last few years, when in the wake of the country finally realizing that honoring traitors and murderous racists was bad, people pointed out that the Balbo in question was, well, questionable.

During Chicago’s 1933 Century of Progress World’s Fair, an Italian airman led a roundtrip flight of 24 seaplanes in formation for an unprecedented flight of its kind from Rome, Italy to Chicago, Illinois for the fair. In honor of the achievement, the Chicago mayor at the time, Edward Kelly, renamed the nearby three block long 7th street after the lead airman, Italo Balbo. During his time in the USA he also invited to lunch by President D. Roosevelt and received a warm welcome from Americans, particularly Italian-Americans as a shining example of Italian aviation. In fact, for a time, ‘Balbo’ became a common term to refer to a large formation of aircraft.

That might have been the end of it if the Italian government Balbo was representing at the time weren’t that of brutal Fascist dictator Benito Mussolini. Mussolini even donated an ancient Roman column to the city that exists to this day as another monument to the controversial Balbo. Before his aviation fame, Balbo helped institute Mussolini’s Fascist rule as a Blackshirt leader, a gang of Fascist thugs that intimidated and assaulted non-Fascists that stood in their way. He spent the rest of his life devoted to both Mussolini and Fascism. Many considered Balbo to be Mussolini’s heir before he was killed in 1940 by friendly fire.

Now don’t get me wrong: I love that there was a name of a large group of airplanes, and it was the childishly-syllabically pleasing “balbo”. It’s a balbo of planes! That’s fun! Less fun is fascism.

Brutal thuggish dictator Mussolini is the guy on the left

But now comes a movement to rename this street after someone who is genuinely heroic, and who towers over American history: Ida B. Wells.

Balbo Drive would be renamed for Ida B. Wells, an iconic figure in the African-American community who led an anti-lynching crusade, under an aldermanic plan that is certain to stir controversy.

They will introduce an ordinance to rename Balbo Drive in honor of Wells. If colleagues go along with the idea, it would be Chicago’s first permanent street renaming since 1968 and the first street in the Loop named after a woman and a person of color, according to King’s staff.

Wells was born a slave and died in Chicago, and lived a life of tireless and fearsome advocacy. She was an impossibly brave journalist, traveling at great risk throughout the south to document lynching, calling attention to this terrorist scourge, not letting America pretend that it had moved forward one inch. She called just as much attention to a barely-more-genteel form of racism in the north, particularly this violent and segregated city. She was a pioneering advocate for women’s rights, especially at the intersection of race.

In short, she made America look at itself. She was never comfortable, never safe. And she never stopped.

Thankfully, she seems to be having a bit of a moment. A movement to put a monument of her up in Bronzeville seems to be gaining steam. You can (and should!) donate to it, though it is a shame the city won’t just pay for it. If anyone deserves to be honored, it is Wells.

Now, there are a few counter-arguments. Maybe the most compelling one is that the Loop already has a street called Wells, and although the two wouldn’t intersect, or even really run near each other, that could be an issue. That one is named after William Wells, who was killed in the Battle of Fort Dearborn, a seminal moment in Chicago history, though one that is a tad bit more complex than the heroism on which we were weaned.

Still, Wells is too long to be renamed, and that’s a losing battle. I don’t think it would be that big a deal, since people would say “go to Ida B and Michigan!” There’s only three blocks to choose from. GPS might be the only obstacle here (and it is a substantial one.)

The other argument comes from (or will probably come from) the Italian-American community, which was upset last year when people wanted to remove the Mussolini monument, and there was talk of renaming Balbo to Fermi Drive.

Dominic DiFrisco, president emeritus of the Joint Civic Committee of Italian-Americans… joined Lou Rago, president of the Italian American Human Relations Foundation, in writing a letter to the editor of the Chicago Sun-Times defending Balbo’s honor.

They argued that Italo Balbo had unfairly become “residual shrapnel from the barrage of bullets the rest of the country is firing over what to do with the approximate 1,500 Confederate place names and other symbols in public spaces.”

They wondered why the memory of Balbo’s “remarkable accomplishments” was being “swept up into the national wave of removing the past.”

(Note: this is really cute wording. It’s the people opposed to Confederate monuments that are doing violence, and who are “removing the past.” That language isn’t exactly dissimilar to the actual Confederate symps. This is what we call a “tell”.)

“We want to be perfectly clear. Italo Balbo was an outspoken opponent of the Mussolini tilt towards Hitler and was not the enemy that many in the Chicago City Council are portraying he was,” they wrote.

“Despite being a general under Mussolini, when Balbo saw where Mussolini was going with his pro-German policies, he was horrified. He was one of the only fascists in Mussolini’s regime to openly oppose Italy’s anti-Jewish racial laws and Italy’s alliance with Germany.”

That’s good! Those are definitely good things toward which to be opposed. He wasn’t a total monster. Things he wasn’t opposed to, though, include: the invasion and destruction of Ethiopia, war in Europe, the crushing of dissent, internal concentration camps, the spread of fascism, being a fascist. 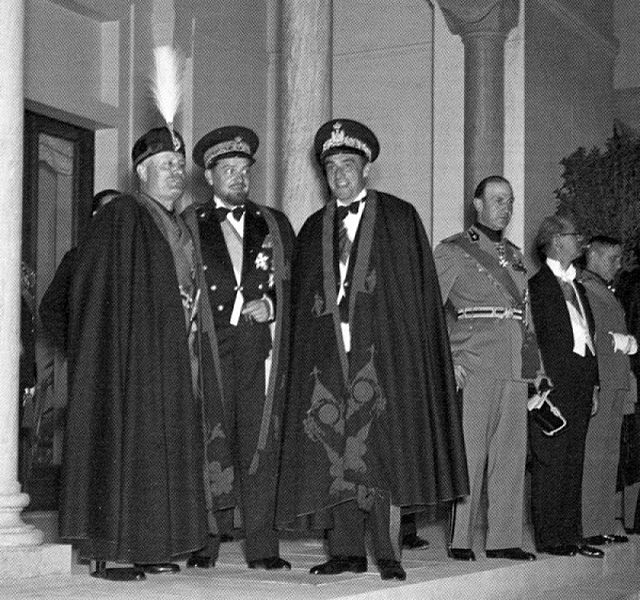 This is him and Benito after “conquering” Ethiopia. The only good person in history to wear a cape like that is Lando.

Now, it is interesting of course, because in America in the 30s, being a fascist wasn’t a disqualifier. It wasn’t a catch-all term for “my political opponent”. Throughout the world, there was a genuine debate if fascism was the ideal form of politics. It was a legitmate political philosophy.

This was true whether it was the personalized authoritarianism of Hitler and Mussolini, the sort of corporatist state envisioned by James Burnham, or a unique American quasi-fascist managed democracy promoted by the likes of Henry Ford, Charles Lindbergh, and for a time even John Kenneth Galbraith.

In other words, they were wrong about everything Ida B. Wells was right about. We’re still fighting those battles, as quasi-fascist strongman nationalist rule is taking hold again around the world, and America is staring at a particularly dumbshow type of authoritarianism. That’s all the more reason to change the name. We’re fighting for what we believe to be good.

This isn’t erasing the past. It’s celebrating what America should be. It’s celebrating the best of us. It’s honoring the true forgotten past, and honoring someone who never let us forget our dark present. It might be a small street, but it would be a huge step forward.

2 thoughts on “Rename Balbo Drive! Up with Ida! Down With Fascists!”