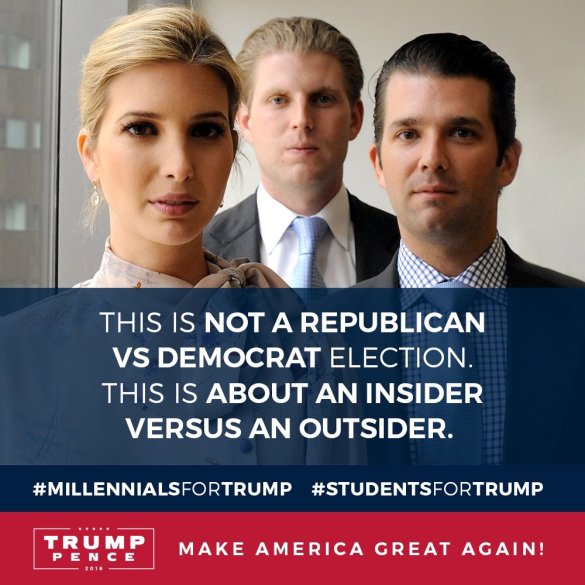 A weird and ill-thought-out tweet  provided one of this miserable gut-kick of an election’s biggest unintentional laughs, save every time Jeb Bush spoke, but also highlighted its single-biggest dishonesty.

Remember back in June, when Paul Ryan was doing his little cowtown Hamlet act about whether or not to endorse Donald Trump? And the media was going crazy about his principles, and if he could reconcile them to Trump? And then he endorsed, and we all realized, oh yeah- a Republican is most likely going to endorse a Republican? Well, I was reminded of that cloying bit of scripted drama over a long and relaxing weekend, when Donald Trump’s adult children stared blankly out the Twitter screen in order to win over the youths.

The comedy here is clear: in an attempt to appeal to young and fresh-thinking Millennials, the campaign is trotting out the family (minus Tiffany and Baron). These are cool, successful, relatable types. And they are of the age group, more or less. Donald Jr is 38, Ivanka is 34, and Eric is 32. Junior is more or less the tail end of Gen X (he’s the same age as I am, and I consider myself culturally part of that middle child of a generation: Nirvana and Winona and all that, even though the distinctions are blurred and meaningless).  But Ivanka and Eric qualify. So, cool: right?

Of course not. People like Ivanka, because she seems normal and smart, but mostly because she’s pretty and we want to impute good intentions to pretty girls. The boys, though? They look like exactly what they are: children of enormous wealth and privilege. They look like they’re about to tell you that your benefits are being cut. They look like they are going to chew you out for bringing a steak medium rare, when they clearly said medium, you got it, even though ordering it medium is barbarous. And then they’re going to ask for ketchup.

So yeah, in image alone, I don’t think Millennials are going to be super attracted to this, and think: hell yeah! He procreated at roughly the same time as my parents did, even though he’s considerably older. He’s my kind of President! Policies shmolicies.

But that– the “policies shmolicies” matrix– is the dishonest part of the campaign, and this message in particular. That’s what this Tweet is trying to say. To quote “This is not a Republican vs. Democrat election. This is about an insider versus an outsider.”

This is one of the two foundational lies of the Trump campaign. The first one, the elemental one, is that he is in any way competent, or honest, or qualified. That’s the inherent fraud at the heart of everything he does. But this is a different lie, and it is one in which the media has been complicit, as they were during the boring Paul Ryan drama. It’s pretending that, because he doesn’t actually believe in anything, or know anything, he’s somehow independent.

As Joe Biden, spirit VP of Millennials, would say, that’s a bunch of malarkey. It’s because he doesn’t believe in anything that he is 100% Republican. Look at his hyper-conservative platform. It’s because he doesn’t care about anything other than aggregating power and fame. Or how he’ll outsource Supreme Court nominations to the ultra-right Heritage Foundation, employers of Jim DeMint. His tax plans are extremely regressive, rhetoric (100% dishonest rhetoric) notwithstanding. Simply because he says “the game is rigged” and condemns outsourcing doesn’t make him not a Republican.

And yes, you can throw in the naked appeals to white nationalism that have been part of the GOP since Goldwater, and the chest-thumping “law and order” fight songs, which signify a suppression of social justice. You can and should throw in the racist birtherism and paranoia that have underpinned his entire political life, and that have been one of the driving forces of the Republican party for decades. He also thinks global warming is a Chinese conspiracy, so there is that, too.

All of this is to say, that, contra the cool young kids up top, this is very much about Republican vs. Democrat. Trump’s His laziness and mediocrity will allow Ryan to pass his hateful union-killing, middle-class destroying, rich-promoting, poor-killing, anti-women and environmentally-destructive agenda. That’s very Republican! Throw in his own paranoia, nationalism, and egotism, his desire to have a chest full of medals, and we’ll have the furthest-right government imaginable.

Want further proof? The last thing that Phyllis Schlafly did in her wretched and cruel life was endorse Trump, and write a book call The Conservative Case For Trump (which drops today!)*

I don’t expect the Trump kids to be any more honest than their father. I do expect the media to call him out on it.

*I was thinking of writing a piece on her, but I can’t do any better than Marchman’s savage takedown.