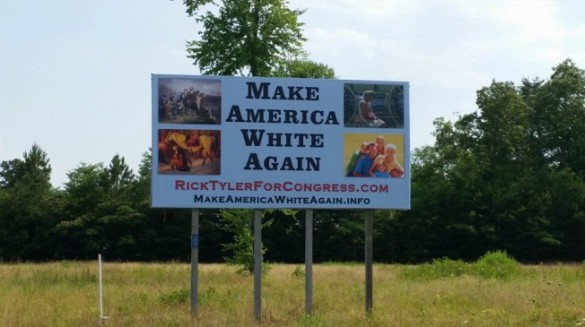 The story of Rick Tyler, running for Congress in Tennessee’s 3rd, is a few days old already, which I know is eternity in internet time. But we’d be remiss not to mention it. It seems like most of the commentary, understandably, is of the “christ, what an asshole” variety. And he is! He’s one of those hateful flakes who keeps running and losing (unlike hateful Jeff Flake, who keeps winning), and amping up his message every time to make himself more known. No such thing as bad press, right?

“For these reasons we are confident that a widespread and creative billboard advertising game plan could go a long way toward making the Rick Tyler For Congress candidacy both viable and a force to be reckoned with. Clearly we are in uncharted waters, in that there has never been a candidacy like this in modern political history. Of great significance, as well, is the reality of the Trump phenomenon and the manner in which he has loosened up the overall spectrum of political discourse.”

“The Make America White Again billboard advertisement will cut to the very core and marrow of what plagues us as a nation. As Anne Coulter so effectively elucidates in her book, Adios America, the overhaul of America’s immigration law in the 1960’s has placed us on an inevitable course of demise and destruction. Yes the cunning globalist/Marxist social engineers have succeeded in destroying that great bulwark against statist tyranny the white American super majority. Without its expedited restoration little hope remains for the nation as a whole.”

This is still scary stuff. Even in that 2nd paragraph, he gives ultimate lie to the conservative movement, not injecting racism into its normal language, but making plain that’s what has always been its animating force. It was a comforting story Trump laid bare as myth. And that’s the point of this.

He’s encouraged to lay out a nakedly racist billboard by the Trump campaign, and its success. That he won’t be successful doing so isn’t a contradiction of the awesome forces Trump, and Trumpism, have unleashed in our uncertain world.  (Don’t think this wasn’t essentially the Brexit slogan.)  If he tried to pull this shit in the 50s or 60s, there’d be a lot of people telling him it was pretty tacky, and no one would have tried it after at least the early 70s. Even naked racists like Helms and Thurmond knew they had to pretend there were other motivations to their salivating hate.

He won’t win. He won’t come close. And he has been condemned, in all quarters (though if Trump has been asked about it I haven’t seen). He’s a sideshow, after all, right? It’s just a slight stone rolling down a hill. But they all are, until it’s an avalanche. It’s always a sideshow, until the carnival has taken over the town, barkers running madly in the streets and the clanging sirens and blinking lights of the decaying midway blare through your window every night, exposing you to the nightmares of your soul.