More evidence that the swamp things are rising.

There is so much to talk about these days that I don’t really know where to start half the time. There isn’t enough time in a life to get into the full horrors of what is happening. Rex Tillerson as Secretary of State is key to the whole project, in a way: the ethnonationalism, the grasping greed, and the Russia angle. I’m working on some thoughts on it, because I think his nomination illuminates the Putin-driven global angle in a way that draws in Turkish pipelines, political subversion, anti-European energy politics, racism in America, and Hungarian nationalism in Romania, but that might be tomorrow’s project.

The ethnonationalism is obviously hugely important though. And it is one of the biggest stories in these United States. In June I talked about the sign in the picture above, some troglodyte nutjob in Tennessee was running for Congress and put up that billboard. He was empowered to do so by Trumpism, which made it acceptable to say things like this again, because that was the heart of his campaign.

A guy like Rick Tyler is easy to dismiss, but as I wrote, “He’s a sideshow, after all, right? It’s just a slight stone rolling down a hill. But they all are, until it’s an avalanche. It’s always a sideshow, until the carnival has taken over the town, barkers running madly in the streets and the clanging sirens and blinking lights of the decaying midway blare through your window every night, exposing you to the nightmares of your soul.”

And well…that’s what happened. They have taken over the village, and swastika-tattooed moral amputees are imping across the town square.

Hate crimes are up all over the country. Reports of violence, intimidation, gleeful attacks, vandalism, bullying, and more have skyrocketed. Muslim women have their hijabs yanked off on the streets. Hispanic students have “build that wall” chanted at them. Nazi symbols are painted everywhere.

This isn’t incidental, nor is it people blowing off steam. In their minds, to an extent, it is  being liberated from the smothering bondage of being politically correct (i.e. being decent to people).  But it isn’t just about language; it is about a belief that they have been losing because of the language, that language was emblematic of the systemic robbery of the ground-sprung rights.

Like with Milosevic, Trump has been telling people that they’ve been kept down by the others, and now they can rise up. That’s what “winning” means. That’s why you see this rise. He has played with ethnonationalism in the same way that Eastern European autocrats did after the fall of the USSR. And it is the same thing: a system has failed (in this case globalization, in that it has advanced inequality), and so a strongman steps in, and points blame at those even weaker than the losers.

Doesn’t it look like that? If you squint, can’t you see grainy Serbs in cheap jackets setting fires in the streets or hardened Croats chanting Ustashe songs? Is that the movie we’re watching?

Consider this just from the Chicago area: 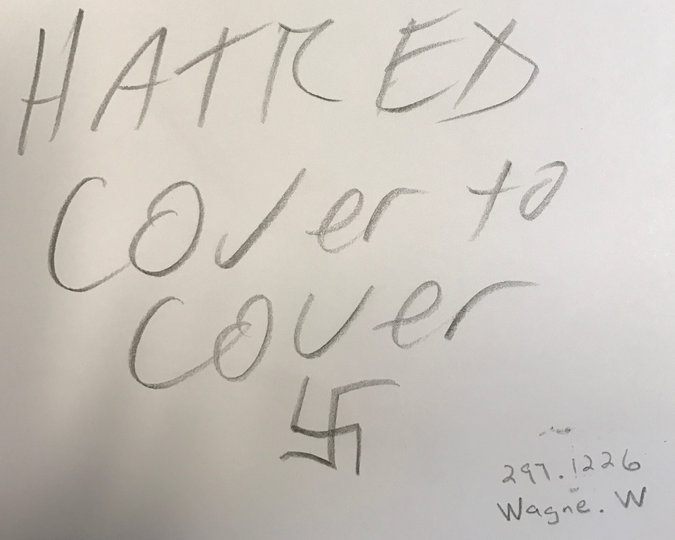 I don’t want to analyze this too much. The handwriting looks childish, but the language is not. A teen doesn’t just write “HATRED COVER TO COVER”. That’s learned.

Now, you can say, hey, isn’t Evanston very segregated, for all its liberalism? And isn’t Chicago super-racist? And I would agree to both. And that’s the point: this stuff, this racism and hatred, isn’t in the past. It is barely buried. It takes very little for it to come out and erupt, for what we all pretended were bodies hidden in concrete graves to reveal themselves poking out of our shallow gardens.

This hatred is here, and it is real. It is part of our national character. That we pretend it isn’t is at times a good thing; acting decently becomes a habit, and it becomes engrained. But bad conditions can bring it back. And bad conditions culminating in the election of a race-oriented Putin-style ethnic agitator? That’s when the earth opens up. It’s already swallowing us all.

One thought on “Hatred Everywhere: Further Landmarks on the Road to Hell”