The Oklahoma Legislature on Thursday passed a bill that would effectively ban abortions by subjecting doctors who perform them to felony charges and revoking their medical licenses — the first legislation of its kind. 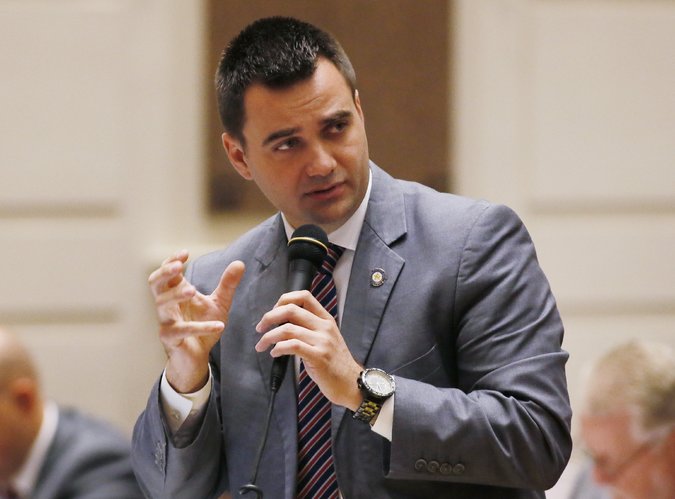 Pictured: Nathan Dahm, who clearly sees bigger things for himself.

The measure passed by the Oklahoma legislature will be struck down by any court- it’s as blatantly unconstitutional as it is punitive. Senator Nathan Dahm, the sponsor, said he knew it would be challenged, but that he hoped it would lead to overturning Roe v. Wade. It won’t, or course- if Mary Fallin (who is openly angling for a Trump/Fallin ticket and has November on the mind) signs it, it’ll get slapped down by the first judge whose desk it slithers across.

I don’t know if Dahm is stupid enough to believe his bill will make the Supreme Court, or just cruel, but it doesn’t matter. This bill isn’t about the law. It’s nothing more than intimidation, making it chokingly oppressive to provide women’s health services in Oklahoma. It’s about putting fear in the heart of anyone who wants to perform a vital (and as we seem to need to be reminded, legal) service.  It’s goons smashing windows and breaking kneecaps, and it is designed to encourage violence by legal labelling any abortion doctors as felons. You don’t want felons in your neighborhood, do you Clem? Of course not. Let’s go get ’em.

That defending the bill will cost money doesn’t make this less a mafioso tactic. The mob rarely did anything that didn’t turn a profit, but they knew that while war would cost business, it was sometimes needed. And that’s what this is: the biggest bomb yet dropped in the war against women’s health. Cost doesn’t matter. Can you really put a price tag on fear?

OK, so this isn’t as much “breaking” as “happened 3.4 billion years ago”, but it is still pretty amazing.

Dr. Rodriguez said that some 3.4 billion years ago a meteor crashed into the ocean triggering a mega-tsunami that plowed into the coast with waves as tall as 400 feet. The meteor left behind a crater about 19 miles across. When the water retreated into the ocean it dropped 30-foot tall rocks that obscured the original shoreline and also left behind channels that provided clues to the ocean’s elevation.

It’s always important to remember that we live in a solar system so vast and in a universe so unimaginable that it can wipe us out- our science and our Shakespeare, our dumb wars and our fierce loves- without even noticing. It would just be a matter of a couple of tiny rocks smacking into each other.

That’s not nihilism. That the sun will one day explode makes every day that it doesn’t- every day that we’re near enough to that gigantic nuclear cataclysm to live but not near enough to melt- a day to celebrate. Just, you know, keep funding Near Earth Objects research. It’s sort of important.