Reminder: he’s going to be terrible for women no matter what

There are few greater indications of the warping effect of political loyalties than we see in the attempted rape accusations levied by Christine Blasey Ford against Brett Kavanaugh, hitherto the all-but-certain next Supreme Court nominee.  No one except Ford, Kavanaugh, and possibly Mark Judge know what happened, and that might not even be true. The bridling effects of time and self-deception and trauma and any other number of factors might preclude anyone from being absolutely certain.

Myself, I tend to err on the side of the women, especially in this case. For one thing, there’s no real incentive to come forward. I know people are saying she’s a left-wing opportunist who is just trying to get fame and fortune, but come on. This isn’t Stormy Daniels, who clearly thrives in the attention economy. This is an anonymous woman who was opening herself up to opposition from the most powerful and most vindictive man on the planet, who has zero problem destroying lives.

And this instinct to defend one’s side was a conclusion all but foregone. Immediately after coming forward, the right-wing went to war against her. Someone found negative reviews of Christine Ford on the not-exactly-scientific site ratemyteacher.com, and published them. These were quickly amplified by Drudge and Laura Ingrahm, among others. That the reviews turned out to be for a different Christine Ford hardly mattered. That the griping of disgruntled students doesn’t exactly shed light on the validity of rape accusations never seemed to enter in to equation. It was enough to attack her, to sow doubt, to make people associate her with something a little bit off. That’s the playbook.

Needless to say, the worst of it is coming from the Trump family, though surprisingly not the POTUS. Don Jr went all-in. He didn’t say the holding-down-while-trying-to-drown-out-screams didn’t happen, but that it was no big deal. 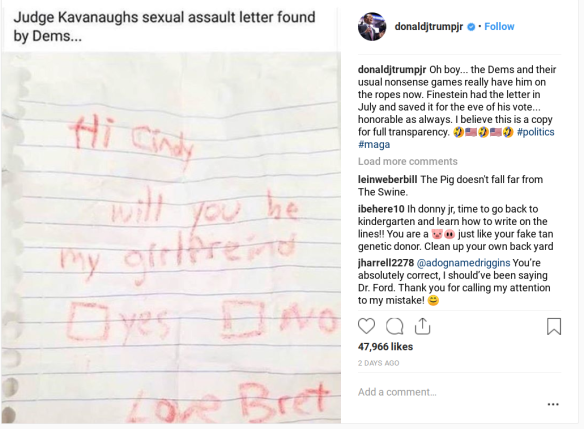 Why are there flags?

So yeah- unless Dr. Ford is a complete dummy, she knew this was coming. She knew she’d be savaged. She knew she was opening herself up to retribution. She knew that the forces of the right would be marshaled against her, with snarling fury. This in and of itself not proof of her accuracy, but it’s not nothing.

That the White House and Congress knew about this accusation (as they almost certainly did) and went forward is appalling, but not shocking. The whole point of packing the Supreme Court, beside helping business destroy workers and the environment, is to negate the autonomy of women. Even if Kavanaugh was a choir boy in high school, he’s still going to wreck abortion rights in this country, and maybe even erode Griswold. That’s the project. That’s why he was pushed and approved by right-wing activist groups.

That’s why the defense of him matters. That people like Don Jr and thousands of others are dismissing his alleged actions as no big deal, just boys being boys, and the opposition to assault as some shrill PC feminism, tells you all you need to know about their priorities. They aren’t ashamed of what he potentially did; they’re proud of it (even as he denies it).

It’s all part of the same animating idea of Trumpism: the id of white men should be fully unleashed, with gleeful sexual fury over the weaker. That’s why a libertine New Yorker who almost certainly has paid for some abortions is the hero of the Christian right and will preside over the demise of Roe. These aren’t contradictions. It’s the expression of misogyny given full reign, and it’s reshaping the foundations of our nation.