One of the problems with only being able to do one post a day (work and other freelance writing, and, you know, my life, interfere) is that there are a million stories you can’t get to. There are a few water stories I want to write, and I want to do a deep dive into some really interesting Yemen pieces. Those are more fun for me, and I think generally more fun for the reader, since they get political/Trump news everywhere. 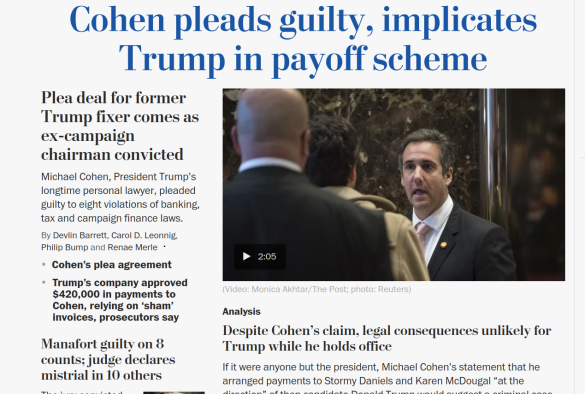 Not only were two of Trump’s top aides (and the former finance chairman of the RNC until JUNE come on) guilty of massive corruption, but the second Republican congressperson in a month was indicted on massive fraud charges.

Federal prosecutors allege that he (Duncan Hunter) and his wife stole $250,000 in campaign funds to do things like take their family to Italy (and buy a three-piece luggage set for it), buy their kids’ school lunches, treat family and friends to hotel rooms and wine and golf, and fly a family member’s pet to Washington, D.C., for vacation.

…When Hunter told his wife he needed to “buy my Hawaii shorts,” but he was out of money, she allegedly told him to buy them from a golf pro shop so he could claim they were actually golf balls for wounded warriors.

Hunter, like Chris Collins earlier this month, was one of Trump’s first two Congressional supporters. Now, in the most charitable reading, you could say that Trump is the unluckiest man that has ever lived, and so many people he trusted led him to the near occasion of sin. But why, your charitable Jesuit soul might ponder, are so many corrupt people drawn to Trump? What is it about him?

The clear answer, obviously, is that Trump has spent his entire life as a massively corrupt con man, a soulless avatar of greed and irresponsibility, who inherited wealth and saw that as an obligation to screw people over in order to make more wealth. He used his power to flout the laws, and exploited to the hilt the rigged game that favored the monied of the world.

This was both an American thing and an international thing. In America, the system is clearly designed in a bipartisan manner to make it easy for the rich and powerful to get richer and more powerful. Trump spent a career exploiting bankruptcy laws and the leverage his high-priced lawyers could afford him in order to screw over investors, partners, and (especially) contractors.

That game eventually caught up with him, but it did so when, after the fall of communism, the whole world became a vast playground for the wealthy, who parked their money in offshore havens and laundered dirty cash through desperate partners. Trump was a desperate partner, which is how he got tied up with the Russians in the first place.

He is a dumb man, for sure, a titanically stupid man, one of the dumbest public figures in American history, but he had a knack for exploiting vulnerabilities in any system. He still does, because he has no shame and no motivations outside his narrow and pinched self-interest.

But what about this makes it specifically Republican corruption? To answer this, I want to use the example of the Old Man, Richard J Daley of Chicago, who ruled from 1955 until his death in 1976.

Daley was, obviously, a Democrat, probably the most powerful one in the country for nearly 20 years. He ran a deeply corrupt machine, which used the full force of the office to enrich its members and get jobs for its voters. That was the way the system worked: the machine got jobs for party members, which made them want to be aprty members and vote for the Dems, which allowed them to get more jobs, and so on. And every clout was dipping their beaks.

Everyone but Daley, of course. He wasn’t personally a thief, but he let everyone around him be (within limits). He was corrupt because he allowed corruption, because to a large extent the machine relied on it. They believed that in order to make jobs, there needed to be corruption. This was a deeply cruel and stupid system, and hurt the most vulnerable communities the most, but it flowed from the logic of the machine. Take care of the people who take care of you.

The current GOP corruption is a different animal, because it also follows from the core philosophy: the common good is for suckers, and the government exists only the benefit the already rich and powerful. They don’t believe in the government except as a tool to advance personal interests, so why abide by the rules?

That’s the logic here. If the sole responsibility of the government is to slash regulations to make it easier for the wealthy to make money, why shouldn’t I get mine? If the CFPB is reversing rules that protected vets from predatory lenders, what’s the point in being honest? If we’re rigging the system to ban class-action lawsuits against corporate malfeasance, and thus rendering them essentially unaccountable to consumers, why not spend some campaign money on trips to Italy? If the Secretary of the Interior is blatantly trying to sell off public lands, what isn’t for sale?

The GOP is deeply, impossibly corrupt because it doesn’t believe that the government is set up for anything but narrow self-interest and short-sighted greed. Every action it takes is part of that. That’s why it is no surprise that Trump was the nominee. It’s no surprise that he is acting like any other Republican president would, destroying the social safety net and selling off the common good.

Trump is flagrantly, outlandishly corrupt and has surrounded himself with a collection of impossible goons his entire life. Like attracts like, and their big flaw was getting over their skis and thinking they could get away with anything, even becoming President. But Paul Manafort came from the rarified air of Republican respectability. Duncan Hunter is a GOP scion. Chris Collins was basically bred in right-wing petrie dish, as were other ousted officials, like Pruitt or Kobach or Tom Price.

It’s not a coincidence they all came together. The outrageously corrupted self-interest of Trump was perfect for the modern GOP. It was practically destiny.