We interrupt the Daily Regreatening to bring news from Southeast Turkey, where the great rivers of yore are no longer yoked to nature…

Turkey said Tuesday that Iraqis have nothing to fear from the filling of an upstream reservoir on the Tigris River, saying “sufficient quantities of water” would continue to flow to the neighboring country.

For decades now, in one of the slow-moving but earth-changing stories of our time, Turkey has been reinventing its power supply by building a series of dams and reservoirs along the ancient Tigris and Euphrates rivers, along which the first major civilizations in human history were watered and grown. This has made Iraq and Syria less than thrilled, needless to say.

The final dam, the Ilisu, has slowly started filling, after years of construction interrupted by local protests, international disputes, and Kurdish militancy (the three are not entirely unrelated). The reservoir won’t be completely filled for at least a year, but it is expected to drop the water level in the Tigris by 8 billion cubic meters, leaving it at 17 billion cubic meters.

I don’t know if that is enough (like, I literally have no idea). Iraq’s Minister of Water Resources says it will be fine, but then, I guess, he says a lot of things.

He said Iraq and Turkey reached a “fair” agreement whereby Turkey will release 75 percent of the river’s volume while keeping the rest to fill the dam over the next six months. He said the two sides are set to meet again on Nov. 1. However, when asked about it at the press conference, the Turkish ambassador denied any agreement had been reached.

That’s kind of awkward, and telling as well. Why would Turkey reach an agreement? An agreement means that both sides have power, and if Turkey were to break it, they’d be in the wrong. Without an agreement though, Turkey holds all the cards.

None of this is to say that Turkey won’t release “a sufficient amount of water”, a coldly clinical phrase which carries with it a sort of reluctant and patronizing oblige. It’s not actually in their best interest to have Iraq turn into a waterless hellscape, a nation of 37 million wracked by drought and finally broken. Turkey doesn’t need another Yemen on its border.

But…I mean, things change, man. Even if Erdogan’s government is 100% sincere about releasing a sufficient amount of water–and why wouldn’t you trust him??–who’s to say what the future could bring? Conflict between the nations could easily lead to a withholding. Climate change could make Turkey reluctant to give up any of the water it is storing for itself. Maybe Turkey would want Iraq to turn the vise a little more on its Kurdish population. Who knows?

No matter what, though, Turkey has already changed the water in the region through their projects. In a great interview with the UVA Darden Global Water Blog, Julia Harte of Reuters talks about what Turkey’s vast modernization projects have meant in the region.

Turkey’s hydroelectric dams have reportedly reduced water flow into Iraq and Syria by about 80 and 40 percent, respectively, since 1975. The Ilisu Dam is expected to open on December 31, 2017, but it will take several years for the 10.4 billion-cubic-meter reservoir to flood completely. When it has, Iraqi officials estimate it will reduce the downstream flow of the river by at least half, allowing more salty water to flood into the river from the Persian Gulf in southern Iraq.

Together with a severe drought that has afflicted the region for the past decade, this decline in the quantity and quality of Tigris River water is expected to strangle Iraqi agriculture and hobble the recovery of the Mesopotamian Marshes, vast wetlands in southern Iraq where Sumerian civilization began. The Arabs who live in the marshes were seen as security threats by Saddam Hussein, who accused them of sheltering Shi’ite rebels. He drained the marshes in the 1980s and 1990s by diverting the Tigris into a giant canal. Since the U.S. invasion, the marshes have been making a slow recovery, but the Ilisu Dam will place their survival in jeopardy once more, according to environmental scientists.

This has huge, regional-and-global changing impacts. Over the last 40 years, which is honestly nothing, the entire water ecosystem of three countries has entirely changed. It’s a vast experiment with real human lives at stake, and no one can really say how it will play out.

Dams and Damn Lies and Where Dams Lie

All of this gets to the insanity of national aspirations in a world built on geology. It’s maddening and impossible to think that a border that is drawn arbitrarily, based just on a war here or there or some dusty treaty or just because that’s where we decided, means that some people control the water, and some don’t. Water is real; borders are not. But if you are on one side of that border, if you are upstream, you make the decision.

The decision on what to do with water is true power politics, because it gets to the heart of what it is to be human. We all need water, and whoever controls the headwaters somehow gets to decide who is sated and who is thirsty.

We see this in North America, where the US has essentially cut off the flow of the Colorado River into Mexico. There are treaties to restore it, and technical experts have been working their best to stay away from the heated politics of the moment, and many (though not all) are working in good faith, but it essentially comes down to: we have the river, you can pound (and maybe eat) sand.

Pictured: not a healthy delta

When you think of the history of the US and Mexico, and the stolen land, and the cheap and phony wars, and the racism and xenophobia that follows, and the idea that those sentiments and actions can control a river, you start to see the ridiculousness of it.

When you reflect on just how recent these activities were (about 170 years), and then think of how recent these enormous dams were built, and think about the endless power of the Colorado River, which over countless eons carved out the goddamn Grand Canyon, you see how absurd this whole thing is. Mexico and the United States? Eyeblinks. That border? Sand. The idea that one country “owns” the Colorado? Mind-boggling arrogance. An insult not just to nature, but to the very concept of time.

And dams, ultimately, remind us what time and human life really mean.

Le Deluge: The Past and The Future

One of the effects of a dam is that the reservoir built by the dam is, well, a reservoir, and therefore underwater. Anyone around there has to leave or drown. Towns get submerged, drowned in the depths. There’s something haunting and ghostly about the idea, full cities suddenly made into Atlantis, being eaten away by our attempts to control the very agents of their deliquesence.

But these are real lives that the slow flood will ruin. Harte estimates 25,000-30,000 people will be displaced, with one of the towns being a true gasping tragedy.

Hasankeyf is one of the towns along the Tigris that will be completely submerged by the Ilisu Dam. Unlike most of the other towns, however, Hasankeyf has been continuously inhabited for 12,000 years. From Neolithic settlements to medieval tombs and temples, the town is a living museum where some people alive today grew up in caves built into cliffs overlooking the Tigris. Archeologists are still discovering new artifacts in the town – the most recent Neolithic settlement was unearthed in September – and they estimate that most of Hasankeyf’s archeological sites will be flooded before they can be excavated.

But flooded they will be, and gone under will be that seemingly-endless chapter of human history, in which people lived thousands of years before we started to decide that civilization meant cities and borders and power.

That’s an inevitable side effect of dams, of course: the submergence of history. It happened when the Aswan High Dam flooded the site of the ancient and enormous Abu Simbel temples, forcing Egypt to pick them up and move them, block by block, away from the drowning waters. 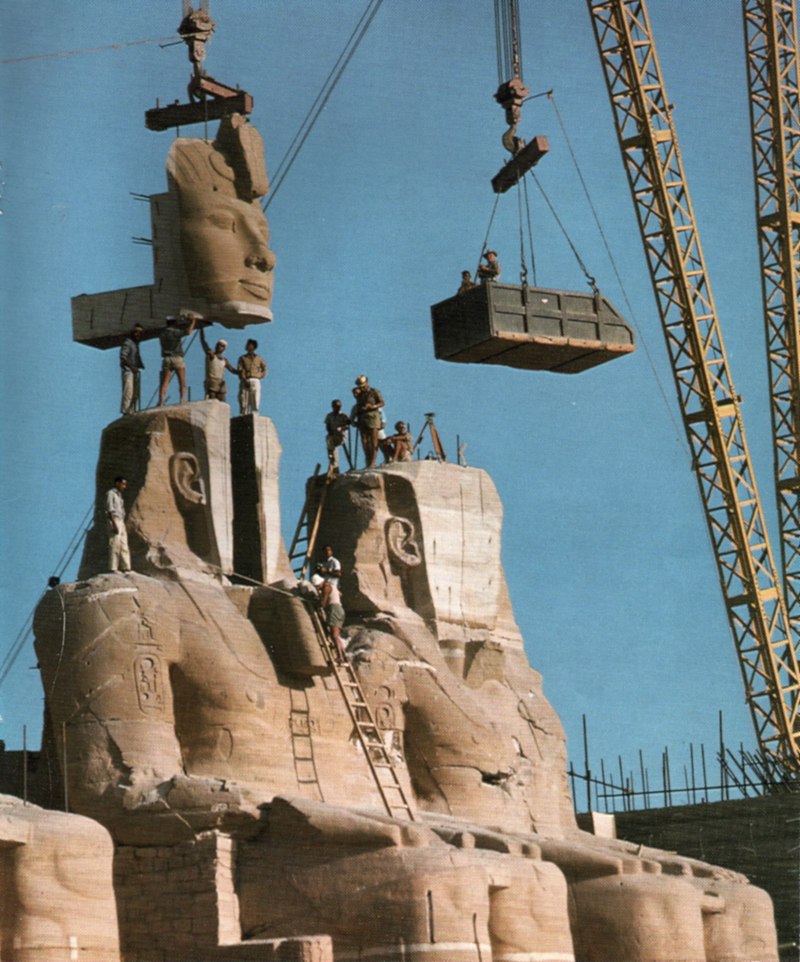 It happens in the United States too. Many communities were drowned when the TVA filled the valleys, and the Glen Canyon Dam destroyed thousands of years of Native history and sacred sites under the waters of Lake Powell.

But flooding, when looked at this way, is inevitable. While changing the flow of a river demonstrates an awesome power, it also is a temporary and transient one. Those ancient sites are not so ancient. They only seem so because of our graspingly desperate misapprehension of Deep Time. The rivers will, ultimately, win.

The Ilisu will one day erode and burst. So will the Hoover and the Aswan. It’s not just that dams are faulty and sometimes, like with the Oroville, can’t handle the weather. It’s that they are impermanent. The Colorado carved out the Grand Canyon. It eroded mile-thick volcanic dams over a dozen times during the Pleistocene. It always wins.

No matter how responsible the government of Turkey is, it will one day fall. Human habituations will change. We might flee a region altogether, or disease may wipe out a huge chunk of the population. None of this may happen soon, but it will happen. That none of the megadams have burst yet doesn’t mean they won’t; it is just a reminder of how impossibly new an idea these actually are.

Humans will stop tending them, or lose the knowledge, or just leave altogether. It may be war, but most likely, it will just be time and its insistence. The water will start finding cracks, and will grow them a forceful laziness, and persistent path of least resistance. These towering structures, which need a word beyond Pharaonic, will weaken and crumble and burst, and the water will burst forth. Ancient cities onces submerged may be see in outlines, while existing cities, themselves now ancient, beaten and strangled by the floodtide.

And the rivers will run again, unconcerned. Looking downhill. Glimmering toward the shining sea.