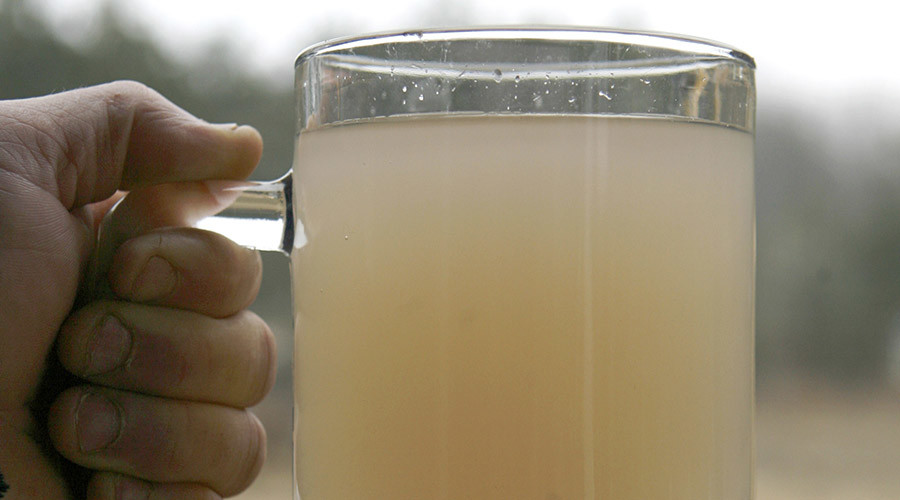 “Brackish” is a wonderfully descriptive word; it is nearly onomatopoetic in its immediate salinity. It has a scaly tangibility to it, and contains within it an instant shudder. “Brack” is the sound you make when you taste something undrinkable, something wrong, something poisonous.

But for too many Americans, that is the reality of their water. It is choking, dirty, and dangerous. It is the opposite of what water should be. It has been degraded by capitalism and left to fester by the people elected to remember the forgotten.

This is laid out in stark detail by Sarah Jones and Emily Atkin at the resurgent The New Republic, in an article titled, with no pulled punches, Rural America’s Drinking Water Crisis.

When people think of water crises, they tend to think of big cities like Flint, Michigan, or Cape Town, South Africa. These places understandably attract the most attention, because one faulty system in an urban area can affect vast numbers of people at once. But, in reality, most health-based violations of drinking-water standards occur outside of big cities, in places like Martin County: small, poor, out of the way. Of the 5,000 drinking-water systems that racked up health-based violations in 2015, more than 50 percent were systems that serve 500 people or fewer. In those small areas, who is going to raise hell except for the people affected and maybe the local paper?

Put all these systems together, however, and rural America’s drinking-water situation constitutes a crisis of a magnitude greater than Flint, or any individual city. From Appalachian Kentucky to the Texas borderlands, millions of rural Americans are subject to unhealthy and sometimes illegal levels of contaminants in their drinking water, whether from agriculture, or coal, or plain old bad pipes. And as the economic gap separating rural America from its urban and suburban counterparts continues to grow, this basic inequality is set to become more entrenched—and possibly more dangerous, as sickness seeps into rural America.

Here I should point out that “brackish” water is an actual thing, not a catchall for any bad water, and doesn’t describe the miserable panoply that makes up water pollution in America. Indeed, Jones and Atkin go into detail about the ways that water is destroyed, from industrial runoff to poor infrastructure to the wasted detritus of extraction or agriculture.

Jones and Atkin highlight not just the causes of these manmade disasters, but the ways in which endemic inequality perpetuates them, and the lack of political will to do anything prolongs the misery.

This lack of will is sometimes rooted in race (Governor Greg Abbot in Texas has vetoed attempts to provide an actual waste management system to Latino communities near the border) and a general ideological hatred for the government to do anything. These two are often related, of course.

One thing I really like about this article is that it makes clear the culprits, if not by name (since this disaster has many parents over generations), but by ideology. And that is basically rooted in the reckless Queen of Hearts cruelty of privatization…something that will only increase under Trump.

And though Trump’s much-vaunted infrastructure proposal will reportedly set aside $50 billion for rural development, a leaked draft of the forthcoming plan makes clear that it may be nothing more than a boon for backers of privatization. “The Clean Water State Revolving Fund (CWSRF) will be open for business for private firms to both manage and repair water infrastructure at taxpayer’s expense,” Michelle Chen recently explained at The Nation. “In addition, a credit scheme under the Water Infrastructure Finance and Innovation Act would provide more opportunity to private investors, by eliminating existing requirements that WIFIA funds be used for ‘Community Water Systems.’” The private sector, with its success strictly tied to profit-making, should not be involved in utilities at all. But certainly when public water money doesn’t even require those private water businesses to use it for, well, community water systems, then the chances those systems will improve is close to nil.

Indeed, profit is the enemy of access to clean water. It might improve it for those who can afford it, but when the bottom line is the bottom line, it is inherently limiting and corner-cutting.

Almost two years ago we were talking about how the rush to privatize the Detroit Water and Sewage Department, and turn it over to a corporation, is what led directly to the Flint catastrophe. But Gary Snyder is still governor, and not in jail, despite the lives he wrecked and the futures he strangled in order to make a few more people a few more dollars.

It’s also worth pointing out, as always, that while people in Flint have their barely-drinkable water shut off for not being able to afford their bills, Nestle pays next to nothing for hoovering up the Great Lakes to sell at a profit. The excuse there is that they create jobs, which is true, but their lack of corporate responsibility–indeed, the inability of corporations to even imagine that they have a duty beyond their shareholders–means those workers come home from bottling water to drink rusty sludge.

But hey, that’s just the way it is. Many are to blame.  Greed is bipartisan (even non-partisan, a warming thought!). But it is inarguably the Republican Party who has elevated the privatization of every basic common good, from national parks to the elements of life, into a totemic goal. And this is what we reap.

It would have been easy for Jones and Atkin to engage in Trumpenfreude, a “you voted for him; now drink up!” Admirably, they didn’t. To do so would have been to pave over the hundreds of years of decisions that led to this (and indeed, the American idea that all land and water should be transformed into capital). They also weren’t Cletus-hunting. They talked to local activists who are trying to do something. They also pointed out that immigrants and people of color are on the front lines of government indifference.

Which only makes sense, of course. It’s everybody. It’s all of us, except for a very select few, who face some kind of water insecurity or dangers, and those of us who feel safe drink water from pipes that get more corroded every day.

That’s because water is the ultimate common good, except for air. It flows unconcerned with borders, with imaginary lines we draw on a map. It doesn’t care what precinct you are in or who your goddamn ward captain is. It just flows, picking up whatever materials are slurried into it, whatever flows from a pipe or trickles from a sludgy stream of runoff, and carries it down the path of least resistance.

Water can clean itself over the years, consistently refreshing in endless cycles, but not on the scale of human lifetimes. When we poison the water, we drink it. We let water be poisoned when we put up the least resistance to privatization, to pollution, to letting companies destroy our basic needs by blackmailing us with jobs. We’ve come to accept this as part of nature. It isn’t.

Maybe “brackish” isn’t the right word. Maybe that isn’t the image I’m looking for. How about “seep”? The poison seeps into our system from centuries of acquiescence to capital, from lifetimes of accepting the degradation of our land, from systems of thought that assume blithe ownership. It runs off from our nitrate; it leeches into the groundwater from our extractions. Then it seeps into us, every day. With every sip.

The idea of the common good has been poisoned. It’s up to us to bring it back to life.

2 thoughts on “Clean Water is a Common Good. That’s Why Its Access is Being Limited.”