This couldn’t be more minor, but another glimpse into the spoiled mindset of a ridiculous baby.

Trump’s poll numbers are thankfully cratering for a number of reasons. You can point to the Access Hollywood tapes-and has their ever been a more fittingly shallow and tacky end for such a shallow and tacky candidate?-but the truth is that his numbers plummeted even before the tapes were released, coinciding with right after the first debate. 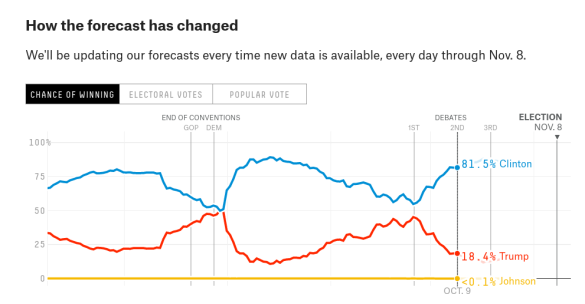 There are a number of reasons for that. He was a bully, he clearly lost steam, he obviously didn’t know what he was talking about, he acted like every loutish sexist you’ve ever known, etc. Those are all valid, and I think they mattered, inasmuch as debates matter. But even more than that, I think his endless whining showed something more important: he’s just wildly unlikeable, and deeply insecure, and a real great big baby.

OK, maybe that’s not as important as being wholly uninformed on anything, but it is also pretty important, and more to the point, important to those who thought him as a tough guy. It was a weird image to begin with, and never made much sense to me: his toughness was having his New York lawyers sue anyone richer and screw anyone poorer. He should always have been the kind of dude his followers hated. But the constant pouting is a bad look, especially when combined with his selfish paranoia, in which everything is all about Trump.

That selfish paranoia, which some say is clearly clinical narcissism (though I don’t know about clinical), is reminiscent of some less-than-savory historic characteristics. In Slate yesterday, Susan Matthews looked into his various diagnoses, and brought us back to a famous book about narcissists, and fascists.

The godfather of personality disorder analysis, Theodore Millon, was drawn to the field in part by Nazis and fascists. Born in Manhattan in 1928 to Jewish immigrants from Eastern Europe, Millon addressed his doctoral dissertation to “a theme of great concern at that time, which had to do with post-Second World War concerns regarding the Nazi Fascistic kind of mentality,” as he told fellow psychologist Michael Shaughnessy. “I did a research study on assessing the characteristics of authoritarian or fascistic personalities.”

(Note: the following is Million)

Narcissists are neither disposed to stick to objective facts nor to restrict their actions within the boundaries of social custom or cooperative living. … Free to wander in their private world of fiction, narcissists may lose touch with reality, lose their sense of proportion, and begin to think along peculiar and deviant lines.

Deficient in social controls and self-discipline, the tendency of CEN narcissists to fantasize and distort may speed up. The air of grandiosity may become more flagrant. They may find hidden and deprecatory meanings in the incidental behavior of others, becoming convinced of others’ malicious motives, claims upon them, and attempts to undo them. As their behaviors and thoughts transgress the line of reality, their alienation will mount, and they may seek to protect their phantom image of superiority more vigorously and vigilantly than ever. Trapped by the consequences of their own actions, they may become bewildered and frightened as the downward spiral progresses through its inexorable course. No longer in touch with reality, they begin to accuse others and hold them responsible for their own shame and failures. They may build a “logic” based on the relevance and entirely circumstantial evidence and ultimately construct a delusion system to protect themselves from unbearable reality.

I mean, there doesn’t seem to be any denying it. Read the whole article; it is fascinating and fair, and ultimately points the finger at a system that can allow such a man to get so close to power.
Anyway, it was impossible not to think about this when reading about Trump taking a day off to promote his terrible, calamitous hotel in Washington DC, the one with the terrible cocktails. Obviously, he got blasted for seeming to value his hotels more than leading a party or representing the people who voted for him in the primaries.
Also, Hillary took a night off for her birthday to see Adele. Guess what was fair and what wasn’t, to Trump?

“She has no energy. She’s got nothing going. She does one stop. And nobody complains about that. Nobody complains when she goes to an Adele concert all night long, while I’m making two speeches at rallies with, you know, massive crowds,” Trump told ABC News.

In the end, this little scuffle is 100% meaningless, but I think it is good to always understand how absurd a human being the Republicans nominated.