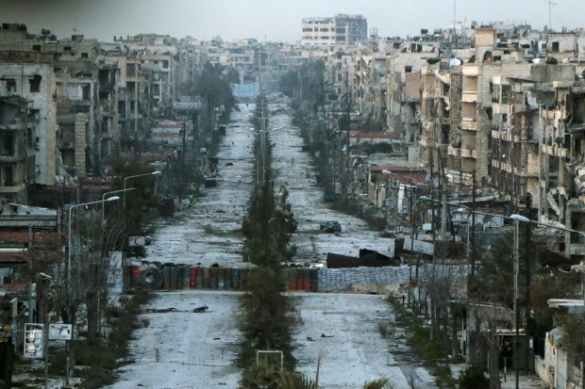 The agony of Aleppo

Russia is enabling and aiding a world-historic humanitarian disaster and war crime. Why?

There was, briefly, a ceasefire. After months of tortuous negotiations between John Kerry and his Russian counterpart, Sergey Lavrov, there seemed to be a brief end to the nightmare unfolding in one of the world’s oldest cities. Within a week, though, Syrian missiles destroyed a humanitarian convoy, a deliberate assault on the very essence of goodwill, a cruel shrug of the shoulders at decency. Since then, the Asad government and their Russian allies have stepped up the barrage, making it worse than anything the wrecked people of Syria have yet seen, to the point where the UN envoy says that the city faces “total ruin” in less than two months.

There are 275,000 people trapped in the smoking and rubble-filled shell of Aleppo, facing starvation. Their hospitals are targeted.  They are dying. This is Sarajevo, Warsaw, Leningrad, Moscow, Stalingrad. The siege is a dark moment for humanity, a world-historic slaughter. So the question is: why? What does Russia have to gain? What do they have to get from participating n this, enabling it, helping it? Why throw away the ceasefire so blatantly?

I think to make sense of their strategy you have to remember the Sochi Olympics. Sochi was supposed to be Putin’s crowning triumph, the re-entrance of Russia into the rank of exalted nations. They spent years in the planning, and billions and billions of dollars to make Sochi gleam. Much of that money was wasted, disappearing into the sinkholes of corruption. Bad facilities were the theme leading up to the Games, and gay rights threatened to dominate the news. But, as always happens, the Games themselves were fine, no real news, and everything seemed fine.

Within a few weeks, Russian troops were sneaking into Crimea, and a civil war was erupting in Ukraine.

That’s Russia’s world order. That’s Putin’s vision of the world. It’s one where great powers like Russia and China– and not incidentally, the United States– should be free to do as they please. To take what is in their sphere, and to place their footprints where they feel it fits. PR be damned. If it’s a choice between Sochi’s afterglow and crushing a pro-West movement in the Ukraine, well, that isn’t a choice at all.

And that to an extent is clearly what is happening in Syria. It’s Russia’s assertion of dominance and importance. I, and many others, think it is madness, and doomed to failure. But while their presence overall in Syria makes sense from that point of view, what does the inhuman destruction of Aleppo gain? And why now, after the ceasefire?

For one, this is what Putin knows best. One of the cities I left out of the list was Grozny, many times destroyed, and finally brought to heel under Putin, his crowning domestic achievement. Chechnya, and his willingness to do whatever it took to “win”, is what made Putin. He doubtless sees an echo. Talk about terrorism, and destroy. That explains his cosmic indifference to war crimes. War crimes don’t exist if you are a major power.

And don’t forget, we believe that as well. America doesn’t torture, because America can’t torture. It’s a little different for Russia. Putin doesn’t think Russia can’t commit war crimes because they are too moral to do so. He thinks it doesn’t matter. War crimes are called so by winners, and so by default, the powerful can’t commit them.

Does that sound familiar? If so, I think that’s another part of the strategy. I don’t want everything to be a reflection of American politics, but it is clear that there is one candidate supported by Russia, and that’s Trump. I don’t know about shady dealings, investments, or anything else like that: I have no doubt Trump is corruptly intertwined with corrupt Russian businessmen, but that’s secondary here. What matters is that they have the same worldview: a handful of countries should do what they please.

That’s what matters to Putin. He hates Hillary’s moralistic American-centered worldview, and thinks, correctly, that it will drive her to be more antagonistic toward Russia. More so than Obama, certainly, who sort of cynically is letting Russia crash itself on the rocks. But Trump and him see eye to eye. Trump isn’t a puppet of Putin (though he is easily played). He’s just a useful idiot.

He’d love to see America stop pretending to be moral and just run roughshod over its sphere of influence while Russia does what Russia does. There’ll be tension, yes, but there’ll also be accommodation. You get Syria. We’ll go here and take the oil, ok?

So what better way to try to influence the election than to ramp up the chaos and tragedy that’s happening under Obama’s watch, demonstrating that the ceasefire he negotiated is entirely disrespected? It’s a weird move, and doubly cynical, because the outcome is more chaos and tragedy, but it is also smart. Make things look bad under Obama/Hillary, elect Trump.

(Note: things are bad under Obama. I was always in favor of non-intervention, but now I don’t know.This will be a stain on our country, on all of humanity.)

I don’t think this will work, electorally. I also don’t think that if it did, it would work out how Russia wanted, except for a diminished America. Trump is too erratic and ignorant. The complex politics of the Middle East would be impossible for him to handle. I think they’ll be impossible for Putin to handle. Read this brief on Shi’a militias in Aleppo and imagine a clean ending anywhere for Russia. There are too many intertwined conflicts, from Turkey to Yemen, and from the Mediterranean clean through to where Iran bleeds into Afghanistan.

There are many reasons for Russian action in Aleppo, and viewing it through the eyes of American electorial politics seems craven. But don’t forget this is part of Russia’s grand strategy, a strategy that would be further enabled by the election of Donald Trump. The people of Aleppo are trapped between a US president gown understandably gunshy about the Middle East, the raw and indifferent cynicism of the Russian president, and their own butcher, gleefully raining bombs on anyone who crosses him. Their courage in the face of tyranny is their doom. Aleppo, that ancient and beautiful city, will forever by a byword for the worst of humanity.

2 thoughts on “What’s The Strategy in Russia’s Aleppo Insanity?”