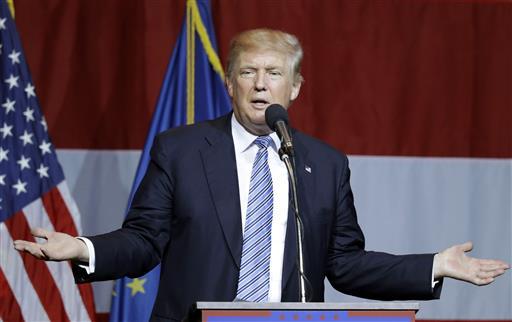 “Everybody says the birther thing was great!”

Donald Trump is preparing to lie today about his role in the birther movement. Will the media let him?

So there’s been birther chaos in the Trump camp for the last day or so, with confusion over whether he has denounced it or not, whether he still believes there’s something up with Obama’s birth certificate, or not. His people give contradictory statements, mostly because no one ever knows what their positions are at any given moment. Katrina Pierson seems to think that the issue is over, Trump Jr. that he has already denounced birtherism, etc. It’s the normal halfwit dumbfest that should doom any campaign, especially one that is based around the idea of him as a great leader.

Apparently, he’s set to make a “major statement” on it today during a speech, but the campaign has already released a statement that is previewing it.

This, then, is going to be the spin. Hillary started it (she didn’t, although elements around, not in, her campaign played fast-and-loose with the “he’s very different than us, right?” element). It was a big issue on the minds of everyone, and Trump, being a leader, stepped in and cleaned it up by forcing the President to release his birth certificate. He stared down the President and won. He never really believed it himself (wait for him to say it, just wait) but wanted to resolve this troubling issue.

This, of course, is 100% a lie. Maybe not that he didn’t believe it; who knows what Trump ever believes, except his own self-aggrandizement. What really happened is that he went on every Fox show, gave hundreds of interviews, in which he became the birther-in-chief, the lead spokesman for the right-wing racist paranoia and hatred. It’s what propelled him to where he is today.

And don’t forget, this was the largest humiliation in a life filled with bankruptcies and business failure. Everyone remembers the Correspondent’s dinner, but watch it again.

Look at this: look at Trump. Is that a man who won? Is Obama a man who lost? Nope. This was a complete devastating humiliation. This was a man who staked his reputation on something, and was soundly defeated. He’s a chump, and he always has been.

But that’s not what is going to happen. It’s will be about how he “closed” this, how he won, how he got done what the real racist, Crooked Hillary, started. How he actually stopped racism.

This is all on the media then. He’s not “Stretching the truth”, he’s not “spinning his history”, he will be flat-out lying. 100% lying. There will be nothing he says that is close to the truth. No equivalence, not hedging, nothing. Just pure lies. They have to call him on this. This could be a pivotal moment, maybe not in the election, but certainly in the way we relate to politics. A candidate will be demonstrably lying about the very recent and verifiable past. There’s no way to spin this.

Is this smart politics? You could say that it’ll hurt him with his base, denouncing the very thing that attracted them to him in the first place. But I doubt it. It doesn’t matter. It’s an emotional connection. As long as he’s sticking it to somebody, this time Hillary, they’ll switch and believe that this is what happened all along. In this way, they are exactly like their candidate. There’s no question that right now, he believes this is what happened. He’s such a good liar because he believes everything he says, because if he says it, and it sounds good, and helps him get what he wants, how is it different from truth? He’s a fantastic liar because everything he says is true, or truthless. He’s at the point where there is no difference.

However, I don’t think it’s going to help him get the black vote, or paint Hillary as the real racist. Most minority voters don’t believe that, because they aren’t stupid, and actually pay attention to things, and know that Trump was saying that a black man couldn’t have been born here. So this is barely about the politics, electorally. It’s about the levels of falsehood that the media can take. If they can take this, there is no hope for honesty anymore.

(Also, that video is pretty sad because everyone got a lot of laughs out of the absurd idea of Trump as president. Who could ever have imagined such a thing!)

2 thoughts on “Pivotal Point: Trump To Spin Biggest Humiliation Into Victory. Will It Work?”