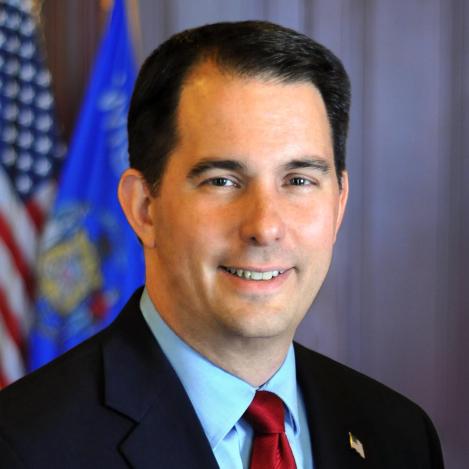 Scott Walker has always been enveloped in a pig-pen like swirl of greed, mean-headedness, and basic incompetence. There’s always been something equal parts shady and stupid about him, like a dumb animal that knows exactly how to survive, but nothing more. If you wanted to describe Scott Walker, you could do worse than to say he’s a canny idiot who knows how to get out the vote in conservative Milwaukee suburbs, Fox River, and the Green Bay area in order to fulfill his goal of advancing the whims of the plutocracy. He’s good at nothing else, but when it comes to ruining Wisconsin, that’s enough.

This has long been known, and darker allegations of illegal coordination between his campaigns and outside groups have been hinted at, taken for granted, investigated, and been shut down. Last year, the final blow came when the “John Doe” investigation into his dealings was smacked down by the hyper-conservative State Supreme Court, led by David Prosser, which ordered all the documents destroyed. This was a victory for Walker, and a bitter defeat for anyone interested in understanding just how Wisconsin, and this country, really worked.

Until now, that is. Not all documents were destroyed. The Guardian, maintaining the reputation for meticulous, in-depth, and fearless reporting, obtained nearly 1500 pages of documents from the case, and in doing so laid out a devastating look at the Walker anti-recall efforts, as well as the money that supported Prosser in his election, and how there was no real separation between any of the cruel campaigns that have undone progressive Wisconsin.

The long article is titled “Because Scott Walker Asked”, which, no joke, is the memo on a large check made out by G. Frederick Kasten, a conservative scion who supported Walker during the recall campaign of 2011-2012.

But the check wasn’t made out to his campaign- it was made out to the Wisconsin Club for Growth, a (bleh) “pro-liberty, pro-fiscal restraint” organization. Their idea of pro-liberty is to destroy public and private sector unions and let corporations do whatever they want to the environment and to workers. This is made abundantly clear during the course of the reporting.

It was Act 10, the move against public sector unions, that led to the recall effort, and it was to stop this that the Club for Growth truly sprang into action. These documents show that Walker would meet with very rich people, and then suddenly, they’d contribute to the Club for Growth. This was clearly to circumvent the laws that only allowed contributions of $43,000 to Walker himself.

That dark money is bad enough, but probably legal, amazingly. After all, there is no “direct ask” here. There’s no actual trail of the donors saying “I’ll give you money if you do XYZ”. Where it does somehow skirt the line is the blurring of the actual campaign and Club for Growth, with top aides for both communicating donor strategies and where they should spend the money. That seems to break even the laxity of Citizens United.

So why no prosecutions? Well, it might have something to do with David Prosser, the Wisconsin Supreme Court Justice, who wrote the scathing dismissal of it. In 2012, he was also up for re-election. Amazingly, the Club for Growth poured millions into his campaign, which he won by 7000 votes. There are many Guardian documents here where Walker and Club people discuss how they have to get donors to make sure Prosser stays, because otherwise the anti-union efforts could be overturned.

This, then, is the darkness is our democracy. Unlimited money can pour in from anywhere, making sure that pet judges stay in place, flooding out voters, and being held completely unaccountable. The Walker model is the apotheosis of this idea of unregulated governance, where the line between donor and legislator is nonexistent, and the one between voter and representative is a thick wall, unscalable, covered in barbed wire and topped with glass.

It’s a complete deregulation of our lives, and it is what Walker has always been promoting. This isn’t an exaggeration. In a heroic connection, The Guardian details exactly how this worked. NL Industries, once known as National Lead, faced a huge raft of lawsuits for dumping lead all over Wisconsin, leading to sickness and death anbd the stunted growth and diminished lives for thousands.

Walker has already managed to pass laws that protected NL and its owner, Harold Simmons, from new prosecution, but that wasn’t quite enough. Simmons also needed retroactive immunity. During the recall battles (which also impacted state senators), Simmons donated $750,000 to the Club for Growth, which hates pesky freedom-killing lawsuits. They are, of course, pro-liberty, and if the tree of freedom must be watered with chemical runoff from lead manufacturing, well, then they are brave enough to do the watering.

Another Foia document shows that NL Industries’ lobbyist directly suggested to the Republican leader in the state senate the language that should be added to existing law to make the effective immunity retroactive. The lobbyist encouraged the Republicans to write four words into an amendment that would apply the new immunity protections to all negligence lawsuits “whenever filed or accrued”.

Two months later GOP senators slipped into a budget bill an amendment that contained the same four words proposed by NL Industries: “whenever filed or accrued”. The amendment was introduced after midnight just before the bill was finalized. It can be found by anyone who looks hard enough on page 548 of a 603-page bill that Scott Walker duly signed into law.

That’s how it works. That’s how a half-bright jumped-up county clerk can enact whatever terrible legislation he wants to open up the Wisconsin wilderness to the highest bidder, destroy teachers, poison the air and water, ruin the university system, enrich his cronies, and strangle workers. It’s how he can help his friends pump toxins into children and not face any penalties. It’s how he can hold onto to venal judges, because money buys our judicial system.

It’s how the system works now. And that isn’t an accident: it is the result of nearly 50 years of deliberate action, meant to deregulate every part of our lives, under the guise of liberty. But it isn’t your liberty that’s being empowered. It’s being taken away, subsumed, crushed under the heavy hand of the wealthy and greedy. It’s the same process by which they want to take the national parks and hand them over to lumber and oil companies, pretending that they are giving them to the people. It’s an attempt to steal our birthright and hand it over to the highest bidder.

It gives the powerful all the tools they need to run roughshod over whatever could make them slightly less rich. Thanks to The Guardian, this is out in the open. You owe it to yourself to read it. It will make you sick and frustrated, gnashing your teeth in anger, and feel filled with impotent rage. The only way to beat this is to win the courts, win the houses, keep agitating leftward, and try to undo the damage wrought by money, greed, and an absolute lack of human conscience.

One thought on “The Guardian’s Scott Walker Papers: Exposing the Anti-Democratic Axis That Runs This Country”