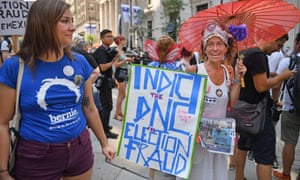 Image from the Guardian

First Story: The DNC is, if not corrupt, certainly skewed toward boring centrism, and staffed with hacks and dopes who send idiotic, if ineffective, emails to each other plotting against Bernie Sanders and any real progressive change. Their little plots might not have come to fruition, but it was symbolic of the attempt to stifle a move toward the left. At the worst, the nomination was stolen from Bernie Sanders, and given to a warmongering neoliberal. Undemocratic superdelegates were just part of that.

Second Story: Hillary would have won anyway. She had the support of Hispanics, blacks, women, and other important parts of the Democratic Coalition. She beat Bernie Sanders by more votes, and more pledged delegates, than Obama beat her by in 2008. The dopes at the DNC didn’t matter. They could have supported Bernie, and he still would have lost.

Third Story: Regardless of DNC perfidy and juvenile grabassery, Bernie supporters have to come around. And the polls say most of them are. Like, 90%. It’s not even close. But the optics are terrible. The media is salivating for a “both sides in disarray!” story. Getting rid of the unexplainable Debbie Wasserman Schultz should be good. Having the most progressive platform in Democratic history should be a huge win. You’ve pushed the DNC as far to the left as can possibly be expected. Even Bernie Sanders is saying that booing is going to be terrible optics, and the stakes are too high. (a Bernie text, via Digby)

And yet, he was booed by some of his own supporters.

Let’s be clear: this is a minority of a minority, and in a very real sense, they are being crazily selfish, hoping for an impossible purity rather than accepting that they have, in a real sense won. The party has moved in their direction, and not even incrementally. If they raise a panic, stomp out, and think that the revolution can only be won by getting everything all at once or nothing at all, then nothing will win. Every amazing thing Sanders accomplished would be ruined.

And yet…they have every right to be angry. What happened at the DNC is not surprising, but it is still maddening and terrible, probably more so for all that. It was a self-inflicted wound by the DNC, in an election that should not be close, that cannot be close.

So the DNC hurt themselves, in an inexcusable way. The lesson for Bernie Sanders supporters is to not do the same fucking thing. Chanting “lock her up”, militating against Hillary, working actively for Trump is a betrayal to everything that every one of us who voted for Bernie voted for. It’s a betrayal of hope. It’s more than a self-inflicted wound. It’s progressive suicide.

So yes, it sucks that you are being asked to be “silent”. I get it. But you’ve already accomplished so much, and the stakes are too high. There is a legitimate honest-to-god fascist running. Your feelings are literally the least important thing here.

One thought on “Booing Bernie, Self-Inflicted Wounds, And the End of Revolution”