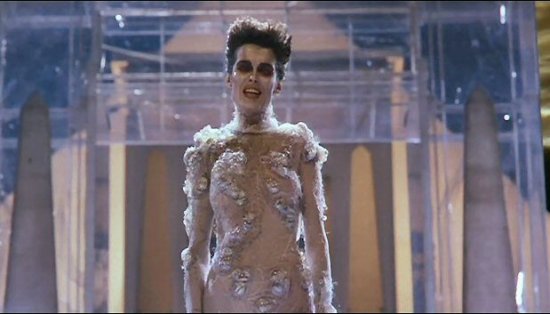 This was always weirdly hot, right?

Last night over at Slate, Jamelle Bouie had an excellent piece on how Trump is defying every political norm. Not the ones where he is winning despite not having a campaign, or any idea of anything going on anywhere in the world, and being completely unlikeable, but rather that where any indecency is not only excused, but expected, and largely ignored. His argument is that the political class, including the media, really has no idea how to deal with it.

For now, it suffices to say that it’s happening—that the Trump campaign is a superhighway for an organized horde of hate that defines much of the pro-Trump grass-roots presence online. Rooted in online communities like Reddit and 4Chan, these supporters—who often identify as “alt-right,” a current of conservative politics on the internet where racism thrives and anti-Semitism flourishes—are virtual shock troops against journalists who criticize Trump or scrutinize his campaign and its personalities. Jewish journalists, in particular, face the worst abuse.

…If political media exists to do anything, it’s to reveal this flow from the fringe. To educate audiences on what these ideas mean, to give context for symbols like the one we saw on Saturday. Thus far, the media seems ill-equipped for the job. For every display of “pro-truth” bias, there are a dozen examples of mindless coverage, as reporters present racist rhetoric as simple “controversy” or frame anti-Semitic propaganda as a “he said/she said” dispute.

…In short order, the boundaries of political speech expand to include outright bigotry. Right now, Trump is showing his dedicated following of white supremacists that you can deny the humanity of other people and still thrive in mainstream politics. If this all feels dangerous—like the beginning of a new, more frightening kind of politics—that’s because it is.

He’s absolutely right. This has happened stunningly fast, the mainstreaming of his hate, and that of his followers. Trump knows, somewhere in his jackal heart, that everything he does will quickly be placed in the framework of normal political discussion. “Well, he did take a meme from a noted racist/anti-semite site, and tweeted it out, and lied about it, but on the other hand, he says he didn’t, so discuss the controversy.” It’s remarkable, and terrifying. We should be marching in outrage against it, but most of us, at best, just sort of blog about it. The more elite talk about how he is “breaking the rules.” The worst and most gutless still back him.

The question I have is if Trump is the destroyer, or just the outcome of how we’ve destroyed ourselves. He seems to me to be the logical (and completely irrational) culmination of a million trends: our idiot media with its constitutional inability to recognize that one party has gone completely insane, its addition to “both-sides-do-itsm”; the way that social media has amped up all our tendencies toward hatred and loudness; our addiction to pseudo-reality spectacle and personality over character and intelligence; our national inability to reflect on mistakes; and more. The system is broken, and we’re huge and unwieldy and angry and bitter and dispossessed. It seems almost impossible that a barking mad know-nothing wouldn’t appear, especially one who already embodied a lot of those trends.So is Trump Gozer, who is creating the destruction, or is he merely the Stay-Puft Marshmallow Man, who is the avatar of our destruction. Choose and perish, right? The

So is Trump Gozer, who is creating the destruction, or is he merely the Stay-Puft Marshmallow Man, who is the avatar of our destruction. Choose and perish, right? I personally lean more toward Gozer, because this galumphing ball of hate and artifice is who he has always been: a racist, misogynist strongman with a pea-brained sense of the world and a galactic idea of a deserved destiny. He’s helped to create the media and cultural environment in which he thrived.

But then, it wouldn’t have worked if we didn’t let him come in, if we didn’t, on some level, choose to accept this. To keep accepting things until they became inevitable, and suddenly we’re saying it is “too PC” when we condemn him for retweeting outrageous and inflammatory racist stats from a white nationalist website.

The Ghostbusters thing is not an accident. This summer, we’re having a new Ghostbusters movie, with an all-female cast. This is: fine. They are all funny actors, and it could be good, or it could be bad. It probably won’t be as good as the first, but it might be better than the second. But the fact that they are females sent a certain sector of dickless morons into a frothing frenzy. Men’s Right’s Activists, who are literally the worst, conspired to make the trailer the most “disliked” of all time.  Because, as we know, it is emasculating and a symbol of PC run amok for females to bust ghosts. That’s a man’s job, and has, throughout American history, been the traditional prerogative of men. Busting ghosts. This is all Shillary’s fault. People actually believe this.

That’s the culture which Trump has come to dominate. People who see aggrievement in everything, and who believe that everything the have is being taken away, and who can, with the strength of like-minded people online, convince themselves that they care even more than they actually do, until it becomes a reinforcing circle of amplified anger. That circle is where Trump lives. He’s not just Gozer, and not just Stay-Puft: be built the circle. He’s our own Ivo Shandor, and his buildings keep going up.

I will be with you, whatever. Christ.

What’s a bigger shock to a national system: an actual surprise, or the tug on the chin, forcing you to look at something unpleasant and buried? For Great Britain, was the Brexit vote (and the loss to Iceland!) the biggest blow to national image, or is it today’s Chilcot Report on Tony Blair, the Ministry of Defense, the political/media class, and the Iraq War? At over two million words- the summary alone is 145 pages- it looks to be an exhaustive look at the complicity of Tony Blair in the rush to an era-defining disaster. (Here are the high points.)

(The low point for Tony BLair is probably this: “In his forensic account of the way Blair and his ministers built the case for military action, Chilcot finds the then Labour prime minister – who had promised US president George W Bush, ‘I will be with you, whatever’ – disregarded warnings about the potential consequences of military action and relied too heavily on his own beliefs, rather than the more nuanced judgments of the intelligence services.” No matter in which tone you read that singular “whatever” it is reputation-definingly pathetic. The Guardian has a great look at how a smart man yoked himself to a swaggering bouffon he thought was both moral and controllable)

But then, the obvious answer to the above question is: of course Brexit (and Iceland!). I mean, everyone knew that the intelligence was phony, the options to avoid war unexhausted, the righteousness of its defenders equal parts unbearable and completely blinkered, and the execution of the war and its aftermath criminally cruel and indictably incompetent. Through its wreckage we have the unspiraling of Syria, the rise of ISIS, the generational refugee crisis, and more. But we know all this.”

That said, there is something vastly important in getting everything down on the record, in complete and unflinching detail. I think this is always important, but especially for the Iraq War. We have to remember what happened last decade. The run-up to the war was filled with chest-thumping fury and smoldering conviction. Those who spoke out against it were banished (remember the Dixie Chicks?). As the war went sideways, it was increasingly buried, ignored, and treated as some distant colonial enterprise on a more malarial time. We collectively (though not entirely, thanks to some brave journalists and activists) shrugged it off, and watched TV.

There was a brief bout of patriotic bellowing during the surge, but even that was perfunctory. It was getting the band back together for one last rusty gig, as the various national security ghouls invaded TVs again to talk about Republican leadership in the face of Democratic cowardice.

But something funny happened during all of that; or rather, not funny, but historically tragic. We somehow shifted from everyone thinking the invasion was great to everyone thinking that it was a bad idea without ever really thinking about it. The conclusion became a done deal, and one we officially don’t talk about. As a nation, we refused to learn its lesson, which is why we focus insanely on Benghazi rather than the intervention in Libya, and more insanely, why Obama can be pilloried for “doing nothing” in the labyrinthine abattoir of Syria. ISIS is painted as Obama’s fault for “losing” in Iraq, and the actual war isn’t talked about.

As a nation, we’ve pretty much forgotten about 2002-2009. That’s partly because its been Republican strategy, with media complicity, to ignore everything pre-Obama (remember how they mocked him for sometimes talking about George Bush, as if there could be any way that the recent past affected the present?). But it is also a national longing to ignore a stupid and bloody and disastrous decade, one that was filled with the dead and wounded, with economic collapse, and a sense of guilt that we spent it watching reality TV. We haven’t had a national reckoning with what went wrong. We jumped into the Obama era as a way to assuage national guilt, and then have been focused on the fury that followed.

Great Britain seems now to have had that reckoning, and we’ll see what the fallout is. Even if people “know” this, there is a difference between knowing something and being forced to face it. It’s the drunk who wakes up in the morning with the lingering guilt he wants to ignore, before finding out that, yup, he knocked up his wife’s sister. You have to face your crimes. I’d like to think we can learn from the Chilcot Report, but think it might be too late. We went from the Obama Era to the Era of Obama Racial Backlash, personified by a symbol of that horrible decade, the reality-show racist. We’ve learned nothing.

I just read Karen Greenberg’s excellent Rogue Justice, which I’ll be reviewing for publication. When that comes out, we’ll have a lot more discussion on how we drifted into the security state we have now. It’s all tied together. In the meanwhile, you should read her book. It’s a great look at the decisions that were made which helped us, as citizens, fall into the indecisions that cemented them.