Waukesha Diversion Week. Part I: The Great Lakes And the Future Water Wars 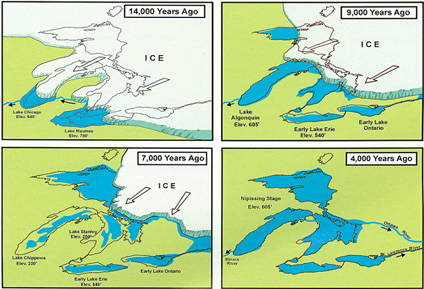 The formation of the lakes. See that 9000 years ago it was draining south. Image from glerl.noaa.gov

I type this late at night, after an evening of losing softball near the shores of Lake Michigan, which has seen us lose more than a little. It’s a warm night, on the stilled brink of a storm, and like many nights, I can hear the clacking rattle of a skateboard. There’s a kid who lives down the street, who nearly every night, walks his skateboard to the hill at the corner, and goes down.  Last year we heard him fall nearly every time, and were impressed by his ability to get back up. A cold-winded winter, in which he practiced most nights, made him better, and after he goes to the top of the hill, he shimmers down with ever more reckless speeds.

I wonder if he knows why, in this flat part of Illinois, in one of the flattest areas in the country, the street has a small hill, no more than 15 feet and low-angled, but for this area, substantial. Why his skateboarding has improved because his parents decided to live on this street, in this town. How the ancient geology of lakes affects his life, and in a real way, the interests that will shape him. If he lived two blocks down skateboarding would have basically been as interesting as cross-country skiing, which is to say: not at all.

But that’s sort of the point of this week’s series on Waukesha: the unseen role of geology, from the crisp edge of a basin to the smallest hill in Illinois. We are beholden to it, and it shapes our politics. It predates us, and it will outlast us, and our little human concerns have to find a way to propitiate geology. Becuase it doesn’t care if we do or not; it’ll keep on shaping out lives, vast and unseen, down to the water we’re allowed to drink.

Let’s start with my hill. About 14,000 years ago, the glaciers pushed south and carved out what is now Lake Michigan (and the others, of course). But, being glaciers, they also took up residence. In pushing everything south, they created a lake that resided at the southern edge of what is now Lake Michigan, a relatively huge lake that spread out beyond the borders of the current lake. It was mostly south and east of the current banks, where Gary is, and where the dunes are. This lake, which we call Lake Chicago, also spread a little north and east of present borders.

As the glaciers retreated, Lake Chicago struggled to find a home. We won’t go into great detail, but it eventually became Lake Michigan, and the melting glaciers filled the rest of the story. There were periods when it wasn’t totally full, but the interesting thing is that until about 4000 years ago, it drained south, through the Illinois into the Mississippi. The great elastic clusterfuck that was the retreating glaciers, and the land rebounding from their colossal weight, eventually forced Lake Michigan to find easier routes southward and eastward, through Huron and Erie and Niagra and Ontario into the St. Lawrence, and thence to the ocean.

And ah: but this eastward draining of Lake Chicago as it became Lake Michigan left some weird high grounds. The old shores dried up, and were higher than the land to the east, which was the old lake bed. This high ground became deer paths, which became Indian trails, which became wagon routes, which coalesced through the alchemy of concrete and urban planning into roads. That little hill is the shoreline of glacial push, an ancient lake. It’s awe-inspring, and I can never look at it without thinking of being underwater.

(Of course, the area around here, and the entire Great Lakes region, and most of America, was at one point a warm ocean, which led to the great seashell rock formations that make up the bedrock of the region, from upstate New York to the vast quarries west of Chicago. But that speaks even more to the point…)

So that leads us to Waukesha, and the Great Lakes Basin. The Basin, which was ultimately formed by this elasticity and compression, was not inevitable. But these enormous forces created the continent. At one spot, near the western edge of Lake Michigan, every drop of water, if left untouched, will wiggle through earth downhill, and end up in the Lakes. Just over that divide lies the enormous Mississippi Basin, far larger than the Lakes, draining hundreds of rivers, including the Missouri and the muddy Ohio, the Kentucky and the Illinois and the Wisconsin. Any drop of water, left unmolested, will hie itself to the Mississippi, and thence to the Gulf of Mexico. It is a simple fact of geology, unable to be reduced, and unable to be expanded.

That’s where Waukesha is. The town lies just west of that imperceptible ridge. It was founded, not knowing anything about basins, in the 1840s, probably a bastardization of Waagoshag, a proper name for Ojibwe, which we know better, through innumerable arrogant Anglicizations, as Chippewa. It was founded, interestingly enough, as a town for water. Its springs, some of which went to the lakes, and others of which went to the Gulf, had supposed healing power, as did nearly everything in those ghost-cursed decades. But regardless of veracity, Waukesha was founded, and thrived, and declined, and became a suburb of Milwaukee.

Looking at it now, we curse its founders for being so near the Basin, and so far. We urge them with the placidity of a century to hie themselves farther east, so that they could be in the Great Lakes system, and we wouldn’t have to worry about destroying a compact.

But we can’t, and they won’t. Nor can we tell the foolhardy simps who decided that Las Vegas was a great place for gaming and hookers that, you know, you might run out of water. We can’t tell the mobsters and speculators that LA would eventually run dry, that the illusion of water, dragged from every other state, was a written in dust, and would soon desiccate away.

That’s the whole story. We’ll get into Waukesha’s claims, which have validity, and those of its detractors, which also have a moral angle. But when it comes down to it, the issues rests on an imperceptible divide. It is a consequential one: Chicago was built on that hinge, on the swampy portage between the sandy mud-choked river and the Des Plaines, which flowed to the Illinois, and then to the Mississippi. My city was built on that tiny change in continental priorities.

But Waukesha, and everywhere else that might want some of this seemingly limitless supply of water, was built outside of it. The decision next week will seem ironclad enough to forestall thirsty western states from wetting their beak. But it is just the first step. As we decide what is a public good– and I don’t believe that something as arbitrary and riverine and nonsensical as a state border should decide life or death- we’re going to have to decide if the Great Lakes are only for those who happen upon its glacier-wrought destiny.

The kid skateboarding is quiet now. It’s almost 2, and even the hardiest are asleep. But he will be up tomorrow, crashing and learning, getting better, and rolling down the bed of an ancient lake, one whose path, equal parts lazy and ferocious, will determine the fate of millions. We’ll hear the clatter, and be reminded once again that our personal lives, and our civic destinies, were shaped by forces we can’t even imagine.

4 thoughts on “The Waukesha Diversion: Geology in Human Affairs”