(Note: the proprietor of this blog isn’t quite emotionally ready to handle the John Bolton appointment, except to say we’ve spent the week ruminating on the 15th anniversary of the one time Bolton unequivocably got his way.) 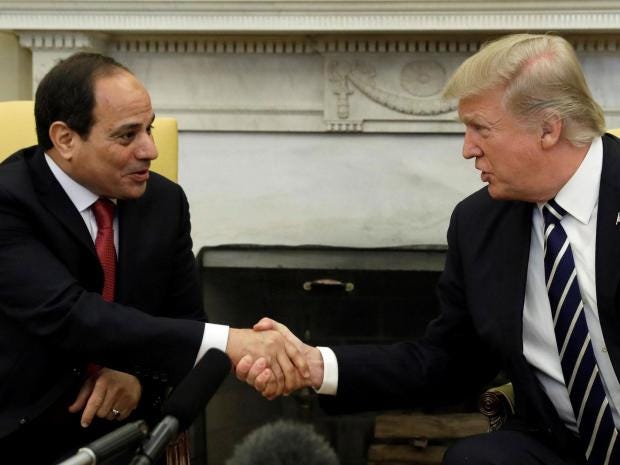 As we round into Egypt’s presidential election, in which Abdel Fattah al-Sisi is running essentially unopposed (his one opponent has endorsed him), the victor himself is lamenting his lack of worthy opposition.

“You are blaming me for something that I have nothing to do with,” Sisi said in the interview that was broadcasted across major Egyptian channels.

“We are not ready, isn’t it a shame … we have more than 100 parties, nominate someone.”

Now, to be perfectly fair, without wanting to impugn on the credibility of al-Sisi, there were one or two other candidates, but they got busy or remembered they had a hair appointment this week or something.

Two prominent former military men made surprise announcements late last year and in January that they would run against Sisi, with indications from the street that their bids might be popular.

One of them, ex-military chief of staff Sami Anan, was arrested in January, accused of illegally running for public office, and remains detained. The other, former air force commander and prime minister Ahmed Shafik, also dropped his presidential bid.

Rights groups say authorities have cracked down on media ahead of the vote to silence criticism.

It’s clear that, at best, Sisi is “managing” this democracy, a la Putin, or really many of his predecessors in the Arab world. Most authoritarians still have to pretend that they are running elections, giving virtue its due with a smirking nod, but openly make it impossible to be challenged.

But it’s the way in which al-Sisi defends running unopposed that is interesting. He clearly says that Egypt is “not ready” to be democratic, not ready to have a healthy, flourishing election. That’s a common refrain among dictators, and to be sure, it is one with some credibility.