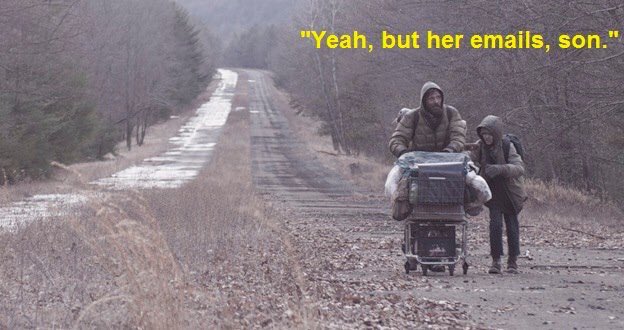 The Russia investigations are a grand opera, and there is a strand of thinking among the clever set that it is a Distraction from the real evil of the Trump campaign. To that, as part of the meta-clever set (and we’re just as irritating), I say: very true! But also: nonsense.

It’s nonsense because the Grand Guignol corruption, of which the Russia element is a key part, is a direct threat to our democracy.  That this is making an already deeply-ignorant and hair-trigger dumb President even more unhinged is an enormous issue. Trump’s respect for the mechanisms of our republic are already paper-thin, if that (witness the CinC telling active-duty service members to call their Congressmen in support of GOP policies); if he feels his misdeeds threaten his power, who knows what he’ll do. To say this is a distraction is to say an earthquake is a distraction from your looming heart attack. Both things are bad!

Because, yes: we do get distracted from the day-to-day awfulness of this administration, and the GOP in general. Perhaps the longest-lasting impact will be on the environment, or what is left of it.

Regulations Are For Chumps Mulvaney: As you can see, freedom is dead.

Last week the WaPo did a deep dive on the administration’s dismantling of the regulatory state. This has little to do with Trump, except for his self-sworn and entirely self-centered belief that businesspeople (businessmen, really) would do great if they were just left alone, because they are geniuses and don’t need any interference or help from Uncle Sucker, except when it comes to bankruptcy protection. And patent protection. And the police that protect the interests of the monied class. But still.

It’s mostly gnome-standard GOP stuff above and beyond Trump. The stated philosophy is to unleash the power of the market. The sub-philosophy is that government has no role and that any regulation is bad. The underlying idea is that there is no common good and the rich should be able to plunder.  That’s why they want to dismantle any worker and environmental protections.

We can argue about which regulations are needed and which go too far. We can argue about the role of government. But they truly believe there is no role. And they believe that because workers and the environment are the fodder of capital for other people. They go in, get churned up, and money comes out and into the pockets of the rich.

Congress Takes on Pipelines and Conduits, With Expected Results

Congress is involved too. Last week, a couple of bills passed the House and were sent on to the Senate.

One, HR 2786 seems noncontroversial (and indeed was almost unanimously passed). This makes it easier to build hydroelectric conduits. The good people at Circle of Blue, who flagged both of these bills, explain.

The bill amends the Federal Power Act to encourage the development of small hydropower projects. Currently, a hydropower project installed in a conduit — a pipeline or canal, generally — is exempt from the licensing process if it is less than five megawatts. The bill eliminates the five-megawatt cap. The bill also shortens the time frame for issuing a licensing exemption from 45 days to 30 days. There have been no national assessments of hydropower potential from adding turbines to conduits, but it is assumed to be far less than adding turbines to dams without them. Conduit projects, however, can have significant local benefits.

I admit I don’t know much about this. This might be very needed, and very good. It might be completely insignificant. But it is part and parcel of a desire to step back, to regulate less, to have less interference by experts. Maybe it will turn out great. But when we mess with water, when we alter it, it has a way of coming back to bite us. Dams break down. Cities flood. I think, as we enter an era of water instability, we shouldn’t make moves that make it easier to tamper with the flow.

The second one is less ambiguous and more immediately insidious. H.R.2883 is known as the Promoting Cross-Border Energy Infrastructure Act, so you know it is going to suck. And it is a doozy.

This bill prohibits any person from constructing, connecting, operating, or maintaining a border-crossing facility for the import or export of oil, natural gas, or electricity across an international border of the United States without obtaining a certificate of crossing.

The Federal Energy Regulatory Commission (FERC), with respect to oil or natural gas pipelines, or the Department of Energy (DOE), with respect to electric transmission facilities, must issue a certificate of crossing for the border-crossing facility within 120 days after final action is taken under the National Environmental Policy Act of 1969, unless it is not in the public interest.

120 days doesn’t really seem like a lot, to me. These are huge, often continent-spanning pipelines. The impact they have on natural resources is enormous and hard to judge. I don’t think I like this.

No presidential permit as required under specified executive orders shall be necessary for the construction, connection, operation, or maintenance of an oil or natural gas pipeline or electric transmission facility, including any border-crossing facility.

This is where the bill really kicks in. While this seems like it is taking away power from Trump, what it is really doing is taking these enormously impactful pipelines out of the realm of public dispute and accountability. It is depoliticizing them in the truest and worst sense. The decision, say, to let bitumen in leaky pipes flow under the Great Lakes will be shunted off to a bureaucracy.

While you could say: good! Let the experts decide without political considerations, what this is really doing is making sure that the decisions are made without scrutiny, and without the negative political ramifications that come with posioning the aquifers. And this isn’t a coincidence. They want this bill passed so that the decisions ultimately are in the hands of this guy.

I know he’s like the least-objectionable person in the admin. He’s still really objectionable.

Rick Perry believes very strongly in pipelines and in “energy independence”. He believes not very strongly in climate science or environmentalism. This bill is a way to greenlight the pumping of Canadian posion into America.

Call your Senators. Tell them you oppose HR 2883, because you think decisions that can impact the water we drink and the land we farm on should be decided in the open, and not by unelected bureaucrats. It’s ok that it seems hypocritical. They’re being hypocrites about it, and we’re in the right on this one. Call often.

This is a bill that can be easily overlooked thanks to the “distractions”. Which means it is one that a concerted effort can stop. If not, the whole issue of pipelines in this country will be altered, and citizens will have nearly no say in what happens to our land. Which, again, is just the way they want it.