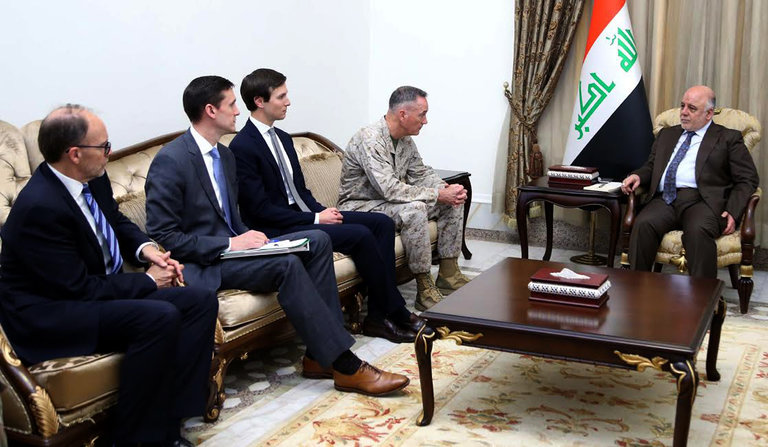 It’s sometimes hard to really put your finger on what is the most absurd and nonsensical part of the Trump Administration, but then you hear about how Jared Kushner flew to Iraq, and you realize: this is it. The flgarant third-world absurdity, the little petty crime family nonsense, the reliance on pseudo-toughguy “loyalty” over even the most basic competence: it’s everything that’s cheap and flim-flammy about Trumpism in a skinny well-married package.

(Note: this isn’t about what’s cruel and evil in the Administration; that’s virtually everything else. The two are intertwined, but we’re just focusing on absurdity right now.)

This isn’t to say that Kushner isn’t, like, smart. He’s not the dopey son who is suddenly made Lord High General of the People’s Glorious Armed Forces. But, relative to the insane position he’s been given, it isn’t too far off. Kushner, as Daniel Drezner points out, is in charge of:

This whole thing is madness. Even if he is smart, there’s no way one person could do any of this, much less all of it. Especially because he hasn’t been able to build a staff, mostly because Trump doesn’t want too many people involved. It’s a family business.

And that’s the heart of how malignantly stupid this administration is. The thinking here literally boiled down to “Hey, that kid who married my daughter is bright, and he’s stuck by me. He can probably fix the world by himself.”

Politico on Saturday ran a long piece about how resentful senior White House staff are of Kushner, equal parts annoyance and jealousy. He’s prone to popping into every meeting, acting as Trump’s eyes and ear and hatchet man, and running things like…well, like Trump would. But one wants to ask these staffers: what did you expect? It’s a White House run by Donald Trump, reality show idiot.

But not all is well, as these amazing parts demonstrate.

Kushner’s boosters see him as “a visionary” who is bringing to government a disruptive Silicon Valley mindset that helped him succeed in the technology and real estate industries, as well as on Trump’s unconventional presidential campaign.

It’s always important to remember that “disruptive Silicon Valley mindset” is what dumb people say when they don’t know what they’re talking about.

Others are more concerned about what Kushner hasn’t done. One pro-Israel operative who works with the administration said “there were high hopes” that Kushner — an Orthodox Jew and the grandson of Holocaust survivors, whose only picture in his office is of his grandparents — “was a guy who really understood our community” when Trump tapped him as a point person on the Middle East.

What? Why would you think that? Because he’s Jewish? Maybe he “understands your community”, but so do tens of thousands of people, very few of whom have any capability at running a government or, you know, bringing peace to the Middle East.

But, the operative said, those hopes mostly have been supplanted by “deep concern that Jared is not the person we thought he was — that this guy who is supposed to be good at everything is totally out of his depth.”

Why was he supposed to be good at everything? Because he was born rich and got richer? Who are these people?

But if you really want the straight hit on how gross and stupid these people are, get a load of these two paragraphs.

Kushner was non-committal about Ratney, according to two sources familiar with the lobbying. But Kushner did go to bat for Abrams, only to have Trump veto the appointment because Abrams had criticized Trump during the campaign and was opposed by Bannon. Nonetheless, Adelson, who has spoken repeatedly by phone with Kushner, was disappointed with Kushner’s inability or unwillingness to deliver on the personnel recommendations, as well as the stasis on the embassy, said three Jewish Republicans active in Israel causes.

This is amazing and beautiful and perfect. A terrible, terrible person tried to get Kushner to install a horrible war criminal in State, but was stopped by a bitter white supranationalist on the grounds that the war criminal wasn’t loyal enough. Does anything demonstrate the twisted web of America’s worst people any better?

Well, maybe: Diamond Mark Perrone tipped me off to a long piece on Jeff Zucker, which included this perfect morsel.

Zucker had breakfast with Kushner a few weeks later in Manhattan. Kushner wanted to know why CNN still hadn’t fired anti-Trump commentators like (Van) Jones and Ana Navarro, who said on CNN in October that every Republican would have to answer the question of what they did the day they saw a tape of “this man boasting about grabbing a woman’s pussy.”… Zucker tried to explain that even though Trump won, the network still needed what he described as “a diversity of opinion.”

So enough of the “Kushner is the moderate” or “Kushner is the voice of reason”. He’s a very small cosseted rich dude who married into an even richer family and rode a tide of white nationalism into power. He uses that to try to silence “enemies”, because he thinks that some wealthy simulacrum of omerta is proof of character. They are playacting as a competent administration, playacting as tough guys, and playacting at solving problems.

Kushner is no different. His portfolio is the biggest joke of all. He’s as bad as his odious father-in-law, thinking that being born rich means you can do anything. It’s the idea that if you just leave it to us, it’ll be solved. That’s our government right now. Whatever isn’t truly evil and cruel about is absurd. That the absurdity has real consequences for people who aren’t them only sharpens the cruelty.

4 thoughts on “Jared Kushner Is The Whole Absurdity”