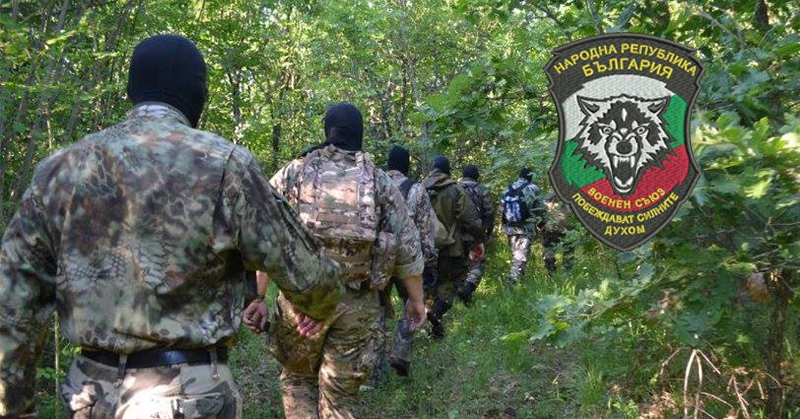 Trees are the only thing that differentiate Bulgarian border militias from American ones.

The historical roots of the refugee crisis in Europe follow the same lines as the immigration debate here, and have had the same atavistic reaction.

The border between Bulgaria and Turkey is often demarcated as a line between two civilizations–East and West, Muslim and Christian–but it is also an arbitrary one, carved out from war and victor-imposed treaties, from appropriation and extermination, and ignores the historical fluidity that has always existed in the area.  That whole area where modern-day Turkey flows into the Balkan peninsula demonstrates that the modern mapmaker’s idea of political borders has little in common with true human geography.

I was reminded of that when reading this incredibly fascinating story by Mac William Bishop on NBC News about organized Bulgarian paramilitary forces on patrol for refugees.

NEAR MALKO TARNOVO, Bulgaria — Figures in camouflage and ski masks gather at a fishing lodge. Many are armed with long knives, bayonets and hatchets.

The 35 men and women are on the hunt in Strandzha Massif, a forested mountain range on Bulgaria’s border with Turkey. Migrants trying to cross into Europe are their prey.

Patches on their irregular uniforms — a coat of arms bearing a snarling wolf’s head framed by Cyrillic text — proclaim them to be members of the Bulgarian National Movement Shipka, abbreviated in Bulgarian as “BNO Shipka.”

Bulgaria is a crossing point for refugees fleeing the horrors of Syria (and Iraq, to an extent) through Turkey and into Europe, in search of a life not dominated by ISIS and Asad and sundry rebel groups fighting unceasingly over a ruined and parched moonscape.

But even though Bulgaria doesn’t have a refugee problem as we understand it (they tend to leave Bulgaria for more prosperous countries) that hasn’t prevented a nationalist and religious backlash, driven partly by an economy that has faltered in the wake of the Recession, and partly by the historical memory of Turkish occupation and all things Islamic. It’s also driven partly by fear, of course.

“Many of these immigrants are not just some guys who are trying to run away from war. They are from age 17 to 35, with good physiques and training,” Ivanov added. “It’s not a problem that they are Muslims. The problem is it’s a different civilization. They don’t think like us, they have a totally different view about life, about everything.”

Now, it obviously doesn’t take much in the way of breaking down that logic. It assumes, first of all, that being between 17 and 35 (and male) makes it weird to want to leave Syria. As a male who once was between 17 and 35, I can testify that I would also want to leave. “Training”, too, isn’t a sign of anything other than living in a country with mandatory conscription.

And there is, of course, the throat-clearing necessity of telling the reporter that “it’s not because they are Muslim, of course,” before finishing with “it’s that being Muslim makes them different. See?” I don’t have a problem with the religion, you know, just everybody and everything associated with it!

Now, just as I said you don’t need a philosopher to break apart the logic in Brother Ivanov’s statement, you don’t need a Rosetta Tablet to translate this sentiment back to America. This is part and parcel of the white supranationalist wave that is sweeping the West, of which Donald Trump is just the most prominent outcome.

But, in a way, the most direct parallel here isn’t with the Muslim ban or the outsized and cruel hysteria toward refugees (and Muslims in general) that have swept in with our new racial leader. It’s with Mexico.

The idea of extra-legal (which in civilized countries should be a way of saying “illegal”) border patrols rounding up scared migrants isn’t exactly alien to this land of ours. The Minuteman group, a rightwing paramilitary force dedicated to rounding up “illegals”, which reached a peak in the mid-2000s, has sort of declined, as this Vice article demonstrates, but it hasn’t gone away. It’s splintered into movements that are even less disciplined, and more empowered by the rise of Trump.

(Incidentally, one of the main reasons that the Minutemen declined is because their racial message of civilizational collapse was adopted by the mainstream Republican Party, which made them less necessary. Remember that when “smart conservative” friends try to tell you that Trump is somehow an outlier on the GOP.)

But the Minutemen and their unruly children are just the reaction to a phenomenon. And that phenomenon isn’t so much “illegal immigration”, though that is a real issue. Even that is a reaction, or at least the outcome, of war and appropriation. The lands where undocumented immigrants are flowing into are lands that were historically Mexico, before 1848, which was not very long ago.

And before Texas, Arizona, California, and the others were America, before they were Mexico, they were part of enormous interconnected and politically sophisticated civilizations and nations, with trade routes from the tip of Central America to the Great Lakes. Mayan goods made it to Mackinac. Thinking of it this way makes it very clear that the saying “We didn’t cross the border. The border crossed us” is very true. That border has existed for only the smallest percentage of human occupation of this continent.

(For the real human damage that border has done–and, oddly, for another example of how this continent is tied together–read Gabriel Schivone’s article on the horrific murderous tactics of even official border guards.)

All of this is to say that America isn’t immune to the forces of history, much as we like to pretend that we’re done with the past. The Syrian refugee crisis is part of the long implosions following the collapse of the Ottoman Empire. The Balkan horrors on the 90s could be seen as part of that same process. That the two are clashing now might seem ironic, or fitting depending on your take, but it seems more inevitable.

That area around the Black Sea has always been the home of groups sweeping back and forth, exterminating each other or getting along, ignoring each other of intermarrying. East and west, following armies and agriculture, moving in different directions as nomads or civilizations, in small bands or great steed-driven groups. The Ottoman era was just part of that process, and the Syrian refugee crisis is a terrible subset of the Ottoman era.

It’s the same in the North America, a land in which the United States is just the most recent political entity. We’re just as prone to these forces of history and demographic imperatives. That we ignore them, and that we pretend that whatever is happening is new and unprecedented, is how we end up with “leaders” like Donald Trump. A failure to reckon with history brings us our Milosevic.

How this supranationalism plays out is new: history doesn’t really repeat itself, it just plays variations on a theme. The rise of global communications and the post-war political structure has its own notes to add. But now, with Trump, the conflicts of North American history are tied intimately to those of the Europe and the near East. They are part of the same fabric: a modern reaction to ancient demographic forces. How we handle them could decide the next phase of our civilization.

(Not exaggerating with this tie, either. Of course they like Donald Trump.

Members of the paramilitary organization form into ranks as their leader, Vladimir Rusev, speaks. A former colonel who says he fought in Chechnya as a volunteer alongside Russians, Rusev declares his support for a man they admire: President Donald Trump.

“The CIA is trying to undermine Trump,” said Rusev, a compact 58-year-old with a neat mustache and short-cropped hair. “They want to destroy him. We offer our support to him.”