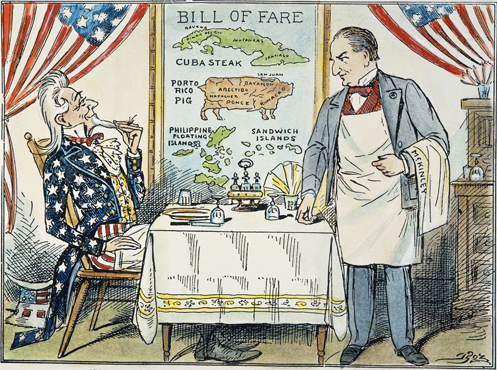 Trying to figure out Trumpism, as it relates to foreign policy, is in many ways a mug’s game. After all, it seems, he doesn’t really think deeply about the world, or even much at all. Just as a place to screw people over or where America gets screwed. To imagine Trump with a unified theory is to imagine him really considering an issue, and that’s laughable.

But that doesn’t mean he doesn’t have opinions, and half-baked self-centered beliefs. And one of this blog’s long-standing principles is that Trump’s personal pathologies perfectly fit the goals of the far and alt-right, which makes him the perfect vehicle. His empty faith that he is the world’s best negotiator allow for the breaking up of the multilateral order, and his own roiling racism dovetails perfectly for their anti-Muslim and white supranationalism fervor.

And, through that, we’re beginning to get an idea of what the foreign policy will look like. The Soufan Group watched his Fate of the Nation speech, and weren’t thrilled with what they saw.

Since the end of World War II, the U.S. has viewed and positioned itself as the leader of the free world….Despite the variations, (ed: in how this has played out) the core of U.S. foreign policy over the last seven decades has been that the U.S. would play a leading role in the global order.

The Trump administration appears in both rhetoric and deed to be pivoting from this long-held stance in a noticeable fashion. During his campaign and his first month in office, President Trump has consistently stressed that he believes the U.S. has ‘been taken advantage of’ in terms of trade policies and defense obligations, and has promised that would no longer be the case. Trump’s February 28 joint address to Congress confirmed again that the shift to a transactional balance sheet approach to many international concerns will be a cornerstone of his administration.

President Trump’s preference of viewing foreign affairs in a bilateral fashion—and to approach pacts as ‘deals’—was evident in both what was and was not said in the one-hour long speech. During his speech, the President never mentioned the word ‘democracy’ in any context—foreign or domestic. He mentioned the word ‘freedom’ three times, though none of the three mentions were in the context of foreign affairs or global stability. The only specific use of the word came in the context of health insurance. The term ‘free world’—whatever its merit—was also not mentioned, again consistent with the President’s preference to review and perhaps discard long-standing policies and treaties. He stated that the U.S. “will respect historic institutions, but we will respect the foreign rights of all nations. And they have to respect our rights as a nation, also.” He added: “America is willing to find new friends, and to forge new partnerships, where shared interests align.”

In theory, there might be something refreshing about a US President who doesn’t give grandiloquent speeches about how we’re a shiny beacon on the hill and how our endless struggle and god-given mission is to let freedom bloom around the globe. After all, in doing so, the United States have fomented or had its hands in a dozen bloody and grubby coups, started of perpetuated civilian-slaughtering wars in places as distant as Vietnam and Guatemala, and has generally run unchecked while acting like self-righteous.

But that’s not what Trump is doing. He isn’t wrestling with a tortured history in an attempt to be more decent. He’s saying that America’s problem was that it viewed itself as the guarantor of the international order, and that it hasn’t been aggressive enough.

The essential policy is that we deal from strength, running over those who are weaker, and forming alliances with those that are strong. There will be ideological alliances, of course, but only if they are suitable. If Le Pen wins, then France is a friend; if not: Paris isn’t Paris. To say that this is distasteful, and the opposite of what the post-war world has been like is to say that water is wet.

One doesn’t even have to bring in the Russian angle on this, though Putin’s Russia is the model, the inspiration, and maybe the daddy of it all. This has been the project of the right for a long time. The distaste in multilateral institutions isn’t that they take away American freedom–they really, really don’t–but that they constrain America from acting like a classic imperial power. From “cutting deals” to exploit weaker countries, from forcing our economic interests at the barrel of a gun (well, not really, but in theory), and from carving up the world in a great game.

Where do Mattis and McMasters fit in? Who knows? They probably see it as their duty to check this. The question is if they’ll be able.

As they say, hypocrisy is the tribute that vice plays to virtue. It’s fair to say that has been the essence of US foreign policy while upholding the world order that has gone a long way toward preventing catastrophic war after the fires of last century. Trump, though, isn’t even decent enough to be a hypocrite. For him, and for the team that channels his sicknesses toward their own ends, vice is the virtue unto itself.

3 thoughts on “You Want it Darker? Trump’s Illiberal World Order”