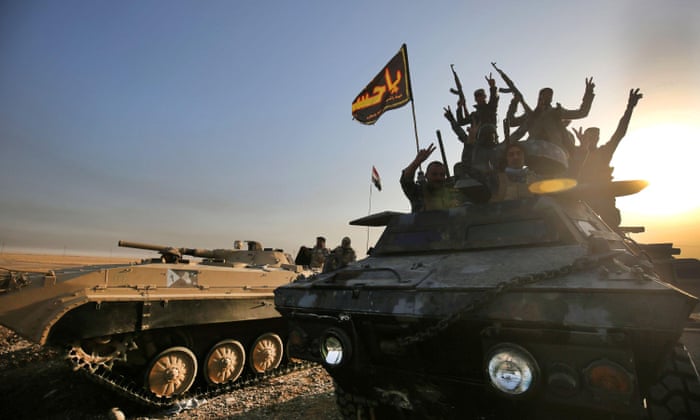 Image from The Guardian

On the first day, the peshmerga do their job, but will do their part? And will everybody else? AN enormous test of what the Middle East will be.

If there’s one thing we learned from the 2003 invasion of Iraq–and there are many quarters who learned nothing, but regardless–it’s that the beginning of a battle in no way resembles the end. A lightning victory is just the precursor, and in this case, the overture is not the opera.

So we don’t want to make too much of the success of the first few days of fighting in Mosul. But, at least in terms of the aftermath, there have been some encouraging signs. For one thing, the Kurdish peshmerga stopped about 30k outside the city after taking several villages seen as crucial to supplying ISIS.

The thing is, even though they are the most skilled and experienced fighters, and the least likely (historically) to melt away if the fighting gets rough, we wanted them to stop. Needed them to, actually. The fear is that Mosul will be absorbed into the Kurdish autonomous areas, and that they’d take advantage of this to expand their territory and conquer Iraq’s second-largest city.

I think that fear was always overblown. The Kurds have shown little interest in taking over Arab-majority areas, because really, who needs that headache? They are trying to defend their own state.

Regardless, their willingness to stop is a good, if still thin, sign that the politics of the battle might hold firm. The US wants to make sure that neither Kurds nor empowered Shi’a militias enter the majority Sunni areas, for fear of reprisal killings, slaughter, or the population deciding that they’d rather have ISIS than Iran.

This is extremely delicate, and the political balance is nearly as important as the actual fighting (more important, in the long run). It’s an enormous test of the Iraqi government, such as it is, and of the US’s ability to maneuver with a small footprint in the Middle East. It’s a middle ground between unrealistic hand-washing and the even-more-unrealistic idea that we can change things through sheer force of our historical imagination.

US aside, this battle could be an outline for a new Middle East, as well, an uneasy peace between state-ish and non-state actors, like militias, or the nascent Kurdish semi-state. We’ve argued here many times that the state system, or at least the post-WWI “let’s draw a line here, why not!” has reached its end, catastrophically. One image of that is ISIS running rampant, the other is Asad fiercely clinging to an imaginary birthright, a third is Yemen being picked apart like carrion, and another could be

One image of that is ISIS running rampant, the other is Asad fiercely clinging to an imaginary birthright, a third is Yemen being picked apart like carrion, and another could be a loose coalition of rump states, ethnic militias, autonomous zones, and tribal entities working in mutual self-interest against common enemies.

That’s…not easy. It wouldn’t be particularly stable. It probably would be sporadically violent. But compared to the other three images, it may be the best bet until what comes after the state actually comes into focus.

So this is also a test. Can the actors in Iraq, Syria, Iran, autonomous Kurdistan, et al, work out a fragile peace? Can the US work with the new reality instead of old assumptions? Can everyone look at the long-term, and wait outside the walls instead of rampaging? These are the questions that will shape the future, and anyone who says they have the answers is lying.

2 thoughts on “Can Mosul Coalition Hold?”