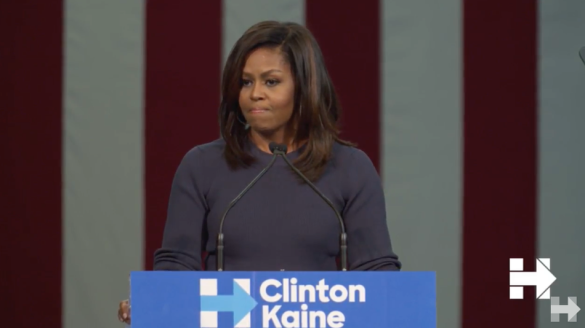 Our remarkable First Lady–in conjunction with the King of Toads, his wretched princelings, and his grasping sycophants–should make us all think about who we are.

On Thursday, toward the end of what had been an unaccountably busy day at work, I read Michelle Obama’s impassioned, powerful, driving speech in New Hampshire, denouncing the hideous sleaze and entitled assault that has always been the dark heart of Trumpism. Her words rang true, as our Laureate says, and stung like burning coal. And then I walked outside, rushing toward the train.

I walk fast, and was quickly closing in on two girls down the sidewalk, in the fall uniform of tight jeans and high leather boots, which happens, I thought, even as the words were tumbling through my head, to be a uniform of which I approve and admire. As I got near, ready to pass on the left, as the streetside was trafficked, someone rounded the corner, and I had to slow down, and walk, for a pace or three, directly behind them.

I understand this is not rare in the city, but in my relatively uncrowded section, there is enough room on the sidewalk to avoid that. There is enough room for it to be uncommon, and entirely unnecessary. And in that split second, the thoughts ran like a palimpsest: annoyance that I had been slowed for even a second, admiration toward the tight-jeaned look, and, through that, some words:

It is cruel. It’s frightening. And the truth is, it hurts. It hurts. It’s like that sick, sinking feeling you get when you’re walking down the street minding your own business and some guy yells out vulgar words about your body. Or when you see that guy at work that stands just a little too close, stares a little too long, and makes you feel uncomfortable in your own skin.

Now, I was just some jackass walking fast. There was no leer, no sidelong glance, no appropriation. A harmless (at least to me) glance or two. But: how would they know that I was essentially harmless (if, indeed, I was, and I’d be interested in responses as to whether you believe that to be that case)? All of the sudden, there was this living weight, directly behind them, coming up too quick, too sudden, too unexpectedly. I could have been leering. I could have been walking behind staring at their asses, nodding, and making eye contact with men passing me, like “Dude-check it out.” And why not? It’s a goddamn free country, right?

And that, I think, is what Michelle Obama meant. It’s what Donald Trump and his horribly entitled sons embody to a shocking degree. It’s appropriation. It’s the sense that women’s bodies, in some ways, belong to us. That if we’re really rich, or if we’re famous, or if we’re in charge, or if we’re cool, or just if we’re near, that we have a right to gawk and glance and touch and maybe you should just relax, ok?

This isn’t a clarion call against attraction, or appreciation. It’s not a call against checking someone out in a quick and respectful manner, or even against lying to friends. It’s about assumed entitlement, and more than that, empathy.

I don’t assume I have rights to anyone, of course. But I get that I could. I get that I could have turned to the girl on the train next to me and struck up a semi-flirtatious conversation, and she would have most likely felt forced to reciprocate. I understand that she could have done the same, but, as with racism– and the essential canard of “reverse racism”– the balance of power is key. I have this presence, this power, this essential weight that can’t get reversed. I’ll never know what it is like to be worried about the girl next to me, taking liberty simply because of my gender, because of who I happen to be in the most binary abstract. Never. And that’s what we need to understand if this horrible culture of victimization, shame, and fear is ever going to actually subside.

And, again, that’s what our amazing First Lady spoke to.

Maybe we’re afraid to be that vulnerable. Maybe we’ve grown accustomed to swallowing these emotions and staying quiet, because we’ve seen that people often won’t take our word over his. Or maybe we don’t want to believe that there are still people out there who think so little of us as women.

I think in some ways that’s what differentiates many, and hopefully most, men from Donald Trump. He does understand it. He understands power: the power of his money, the power of his fame, the power of his gender, and just the power of being shameless, of acting with your id in a world that struggles to get past the worst animal instincts of our species. When you understand that power, and can have no problem wielding it, you can do terrible things.

That’s what this whole insane and sickening campaign has been about. It’s been about saying “fuck you” to every norm, every standard of decency, and everything that we pretend to embrace in order to have a functioning body politic. And the pretending is good! We become the masks we wear.

Trump’s rise has been about pulling that off, donning the garb of the Lord of the Flies, and spilling the blood. His hatred of Mexicans, of Muslims, of blacks, of women, and of everyone who isn’t him, isn’t incidental or accidental. It’s central. It’s a yowl against the progress that slows us down on the streets and makes us consider someone else. It’s a blood-spluttering kiss of death toward the idea of empathy. It’s saying “I can do whatever I want, and anyone who thinks differently can choke on my carbon-spewing souped up truck, can get ground under my wheels, can flee into the woods where their grandfathers were lynched, can go crying to her Jew therapist.”

It is, ultimately, against women. His campaign is one of unbearable false machismo, the antithesis of what makes a man a man, but that too many people think is manhood’s apotheosis. That someone’s whose claim to being tough is having lawyers makes it maddening. But that it exists at all is far more frightening. It’s a wake-up call to everyone.

Not to toot my own horn, but at the State of the Union in January I commented on how I think Michelle Obama loathes Trump even more than Barack does. And I think that’s correct. He goes against every decent bone in her body, which, really, is all of them.

8:56. The President is a politician, so as much as I am sure he loathes Trump, he sees him more analytically. The First Lady, though, I’d like to think despises him. You could tell by the ferocity of her applause when he was talking about how his rhetoric isn’t telling it like it is, but just wrong.

Also, this is dumb, but in the “Tags” for this article, I initially had the “Donald Trump” one of course, but had to take it out. I can’t even stand the thought of him being next to her in the tags. Goddamn, that might be the biggest reason I hope he doesn’t win: so that she doesn’t have to be anywhere near him on the dais, tight-mouthed and revolted, as he leers his jackal grin…

h/t to Nadja Halilbegovich for telling me to write this post, and to my wife, the lovely Allison, who, by the way, looks great in jeans and boots.