Eeee! Image from The Guardian

Paleontologist and paleoartists– which is probably the best job in the whole wide world– have made the most accurate reconstruction of a dinosaur to date.

For being dead for 165 million years, dinosaurs have changed a lot recently. When I was growing up, and probably you as well, they were giant dumb lizards, scaly and fangy, rough lumbering beasts that only occasionally were nice, mostly if they were trying to reach the Great Valley.

But they’ve changed. They were probably smarter than we thought, and probably many of them had feathers, at least later on. We know they became birds (“became birds” is bad phrasing, based on the reverse teleology of us knowing birds before knowing dinosaurs. They didn’t become birds; birds are dinosaurs). It’s weird to think of them as being feathered, but there we are. Science moves, and we have to move with it, or risk being jerks.

Anyway, all these advances and new discoveries have led to better and more accurate depictions of dinosaurs since we first learned that T-Rexes could pilot jets.

That might not be strictly accurate, but according to The Guardian, this is:

This was the scene at the unveiling of paleoartist Bob Nicholls’ new reconstruction of Psittacosaurus. Hailed as the most accurate dinosaur reconstruction ever, it is based on studies of a spectacular fossil from China, carried out by a team led by Dr Jakob Vinther of the UK’s University of Bristol.

For those who don’t know their dinosaurs (or don’t have a small child to haughtily inform them), Psittacosaurus fossils are commonly found across most of Asia. Thebipedal adults used their distinctive beaks to nibble through the vegetation of the Cretaceous, more than 100m years ago. The relatively large brain of Psittacosaurusleads scientists to suspect it may have been a relatively smart dinosaur, with complex behaviours. The large eyes hint that it had good vision.

The Psittacosaurus specimen Vinther’s team studied is held at the Senkenberg Museum in Frankfurt. It is a complete skeleton from one of the world’s best preserved fossil deposits in China. Named the Jehol Biota, these deposits are a Lagerstätte, from the German for storage place­: they are literally a rocky safehouse for the world’s most well-preserved fossils. There are a handful of Lagerstätte around the world, famed for yielding remains that retain their fossilised soft tissues, feathers, fur, skin and stomach contents. The SenckenburgPsittacosaurus is an exceptional example, even having its cloaca preserved – the multi-purpose opening for excretion, reproduction and urination.

The whole article is great, about how our ideas of dinosaurs and their legacy, and the way we view them, has changed. The Psittacosaurus was initially thought to be sort of parrot-like (hence the name), and so some paleontologists tried to find the link, and that led them to retroactively assign parrot-like traits to the little guy. It’s a weird trick that we can play with ourselves, starting with the conclusion and working backward. It is the bane of  not just science, but also, say history (everything in German history must be viewed as leading to Nazis!) and political writing alike.

Anyway, you could try to draw interesting observations about how the past is never settled, because we’re always learning more about it. You could try to make points about the restless and relentless nature of science, and how it never stops trying to better itself. You could even say all these changes show a failure of science, and argue why we shouldn’t listen to conventional wisdom, because that might change (which is the point of science, but hey, you could say whatever you want). We could reflect on the wild diversity of life that existed millions of years ago, that lived and died, and whatever thoughts they may have had. How the enormity of their existence, and its distance from ours, and the way it was snuffed out, and yet the world ground on for eons more, makes our tiny and brief era seem like the faintest flicker, and we could think about that that means.

OR. We could just look at this little guy! Eeeee! 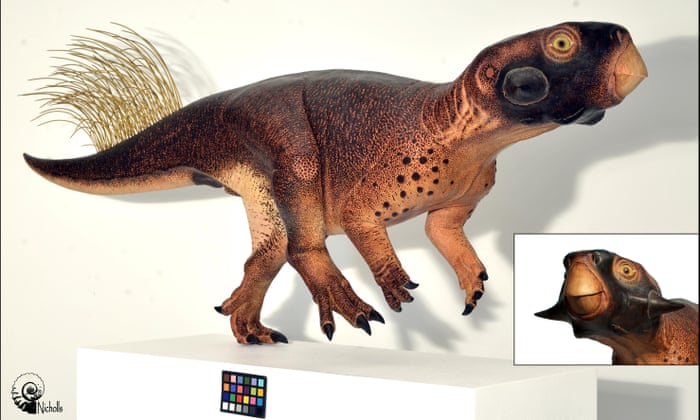