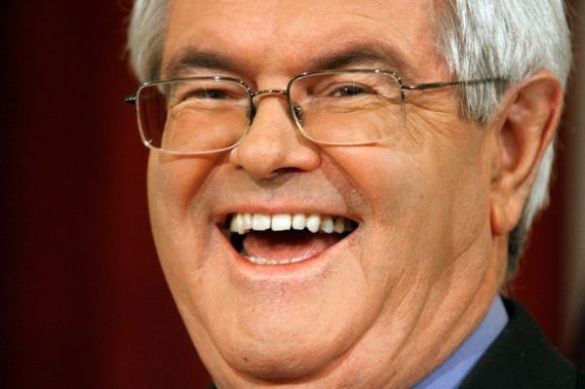 In the last post, we talked about how the kind of mutating terrorist attacks like we saw in Nice will happen in a free society. Newt Gingrich, whose VP dreams have yet to be crushed, eschews all talk of free society.

“Western civilization is in a war. We should frankly test every person here who is of a Muslim background and if they believe in sharia they should be deported,” Gingrich told Fox News’ Sean Hannity.

“Sharia is incompatible with western civilization. Modern Muslims who have given up sharia, glad to have them as citizens. Perfectly happy to have them next door,” he added.

There’s no real need to point out everything that is wrong with this, right? Forget how hideously unconstitutional and un-American it is to have everyone of a single faith line up for loyalty testing. That’s standard Newt: he knows it is what Trump wants to hear, so he’ll say it. (Bonus Newtism: he always says “frankly” when he’s about to say something really dumb, because he feels it gives it intellectual heft. Once you notice that, you’ll see it is always true.)   Let’s also forget for the moment that believing in Sharia is not, in and of itself, against the law. There are a lot of people who don’t believe in the Constit

Let’s also forget for the moment that believing in Sharia is not, in and of itself, against the law. There are a lot of people who don’t believe in the Constitutional order, and as long as they aren’t acting on it, that’s ok. Let’s also ignore the insanity of someone saying that a belief is “incompatible with western civilization” when he’s literally proposing mass expulsion based on a religious-based ideological litmus test, which seems pretty goddam incompatible with Western civilization, to me.

No, what’s really stupid– what makes Newt so world-historic dumb at times — is that he proposes this as the realistic and tough-guy way of dealing with a threat. Tthe attacks at Nice were the “fault of Western elites who lack the guts to do what is right, to do what is necessary,” he told Hannity, and between the two, the perfumed machismo must have been through the roof.  This is, frankly, incredible. How exactly does he imagine this is going to go down? Does he actually think that people dedicated to the destruction of America and the death of all its citizens are also incapable of lying? That after waiting in line for hours, after the Muslim Registration Act, which won’t do much to change their attitude toward the US, they won’t be able to plot a complicated web of deceit, i.e., saying “no” when asked if they are a terrorist?

The most charitable interpretation of this is that Newt actually believes this will work, and that it will allow good Muslims to stay in the US and have everyone be happy. It’s barking madness, of course, and deeply antithetical to the kind of free society that is at the end the final bulwark against radicalism. But if he believed this would work, or was a good idea, at least you could argue from there.

But he probably doesn’t, at least not in any way that doesn’t require the cognitive dissonance that is the heart of the modern right wing. He decided this sounded good, and would appeal to Trump, who appeals to millions and millions of voters. They want the tough guy who will trample our values, because it feels good. In less than a week the GOP is going to nominate someone who brags about his willingness to employ torture. They are appealing because their idea of America is one of soil and blood and steel, and not the actual values that make this country great. They have the same boot-stomping atavistic lure of LePen and Orban and the Brexiters.

ISIS and al-Qaeda want a civilizational clash. They are experts at provoking one. It’s their great good fortune that they have enemies who want to give it to them. What Newt said wasn’t in a vacuum. It’s the direction in which the whole world is lurching.

2 thoughts on “How Not To Keep A Free Society: Newt Gingrich Edition”