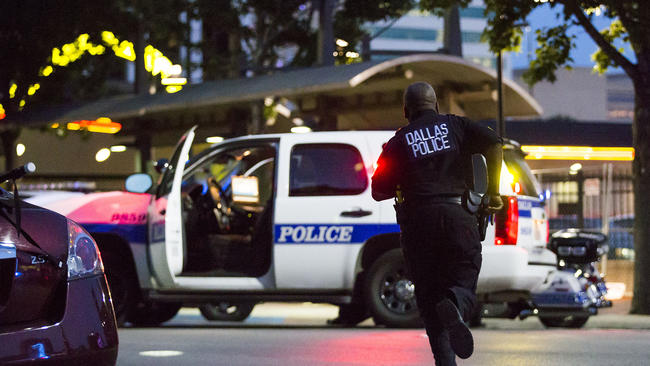 As of this moment (7:15, CST), there hasn’t been anything released on the suspects in the coordinated attacks on Dallas police last night during an anti-police-violence protest that left five officers killed. Right now it seems like there are three possibilities, which puts us at a possible hinge moment in our violent history. This could be one of those days that we look back on as definitive: the anger and wild yawning vacuum that is swallowing this gun-drowned country might be on the verge of overtaking our history.

As we said after Orlando, “not politicizing” a tragedy is insane. The murder of black men by police is political. Protests are political. Anti-police violence is, in a grotesque way, political. We are human actors in a political society, which is why it is important to think about the implications of this violence.

There’s no question that, human tragedy (and ongoing, daily, human tragedy) aside, this will be ugly, as ugly as anything we’ve seen in many years. People will find a way to blame whom they want regardless (Black Lives Matter forced cops to gather in one place because of their protests- it’s their fault!). And we’ll continue moving down a bloody path, where what binds us together seems irrevocably frayed, or worse, proven to have been a lie all along. We have a thousand different narratives, and they don’t seem to connect anywhere. The narratives meet like crashing fairy tales, the old ones, in an intersection of gnarling wolf-teeth and wilding violence, of children being sacrificed to dark mythologies and the only lessons learned are those of fear. Our national story is becoming a burning marching band playing a ragged and pained Sousa as they march off a cliff into a frothing sea.

I feel that everyone is uneasily “rooting” for the shooters to be aligned more or less with their political opposition. That is in an of itself a damning enough statement of where we are as a country.