(I’m going to try, but probably unsuccessfully, to ignore the grotesque spectacle of a deeply unpopular President, aided in his minority-of-voters election win by both the remnants of slave power and of a foreign power, sending more soldiers off to die. That’s America, baby. I’ll even try to leave personal animosity out, with a discussion of his unique pathologies only as relevant to the strategy. Which are very relevant. Basically, I’ll leave out his talking about unity a day before he pardons Joe Arapio, using soldiers as a way to stifle dissent, and how you can’t talk about Arlington the same week you praise Lee. Christ, this guy.)

In case you can’t see the above clip, or for some reason don’t have the context for it, it’s a Simpsons episode where Homer wants more respect, and so changes his name to “Max Power”.  If memory serves, he got it from a hair dryer. That leads to this exchange, where he’s talking about the new Max Power experience.

Bart: Isn’t that the wrong way?

To me, this has always been as perfect a summation of US foreign policy as there can be. The need to “do something” in order to “show leadership” and “set a clear standard” is always a disaster, with the idea of reputation being more important than success. In other words, it is somehow better for our reputation as a superpower to invade somewhere and fail than to not intervene at all. It’s the Max Power way.

But never, I think, have I seen a more clear example of this than in President Trump’s Afghanistan speech last night. The strategy is to focus entirely on counter-terrorism, sending in more troops (though it is unclear how many more) in order to fight ISIL, the Taliban, al-Qaeda, and sundry other baddies on both sides of the Durand Line, it seems. We’ll also be training the Afghan army to fight on its own.

This could be an interesting strategy, except that a) that’s essentially what we’ve been doing since most of the soldiers now fighting and dying were toddling around in short pants, and b) it is, by design, divorced from political and diplomatic realities on the ground.

Trump said time and time again that we aren’t there to nation build, and we aren’t there to play nice. He gave lip service to making sure the government was viable, but considering we don’t yet have an ambassador, it seems like lip service is all we’re going to get. That basically means that we’re going to be bombing Afghanistan and will be there as a force dedicated to killing, and not, say, helping young girls get to school.

And I get that! It’s tough. No more pussyfooting around, snowflake. Let’s let our boys do what they do best. Kill people and break shit. Right?

Right. Except that in no way has that ever helped stop militancy, and certainly never stopped terrorism. The history of the last 16 years has taught us that. There’s no doubt a lot of people will die, many of them “bad guys”. There will also be a lot of civilians that die, many more with a looser combat conduct code. (US-led attacks on ISIS in Raqqa have killed 100 civilians this week.)

This acceleration of less-discriminate violence will be playing out without a strong political component, which to me makes it madness. It is our Yemen strategy on PCP. It’s doing the wrong thing, but faster, and with the volume turned up on Ride of the Valkyries. I’d say it is doomed to failure, but our Afghanistan policies probably have been from the start, through multiple administrations. This will just make the failure bloodier and costlier.

That isn’t to say there is no political component. Trump spent plenty of time threatening Pakistan and cajoling India to pay more. Neither of these are bad on their face, of course. The problem is that he is treating India like a responsible grown-up partner, Pakistan like a vassal state, and Afghanistan like a colonial battleground. This is part of the weird retrograde foreign policy that has formed within the Adminstration, a combination of the British East India Company and a cult of personality.

The world here is essentially America’s to do with what she wants, and what she wants is for Donald Trump to make deals. Unilateral if possible, but the deal is this: you do what we say. It’s colonial and personal, and ultimately absurd. It’s clear that Trump is not a good negotiator, and this is compounded (and predicated by) his ignorance of everything in the world. So he likes to say big things, act tough, and then hope that no one notices when things fall apart. It’s how he’s always done things, but now there is nowhere to hide. Even the smart people around him can’t avoid getting sucked into the black hole or his detached malevolence.

That’s why this “policy” is what it is. It is a reality show, Let’s be Forceful, but without any substance behind it. That it is real, and real human being, American and Afghan, will die with piteous cries or in a blinding instant of non-being, makes it even more loathsome. There is no chance at success, but there is a chance at holding up some head or another for cameras and preening about how toughness leads to victory.

You can tell it is nonsense because Trump spent a long time saying how he wasn’t going to tell our enemies when we’re going to attack, a reference to how he thinks Obama did so. This is a reference, I think, to Mosul, a battle for which Trump took credit, even though he spent all fall complaining that the war for the city wasn’t a sneak attack.

To me, this shows that he still knows nothing. He really thinks it is possible to take a city without first massing troops. He’s so cable-news addicted he thinks that we actually announce attacks, and that he’s the first guy to say we shouldn’t. He’s so self-absorbed that he bases his statements on being tougher-sounding than Obama. He wants to project toughness without actually backing it up. He wants cheap and easy victories without caring about the long-term problems. He wants to do the wrong thing as quickly as possible. It’s the Max Power way. 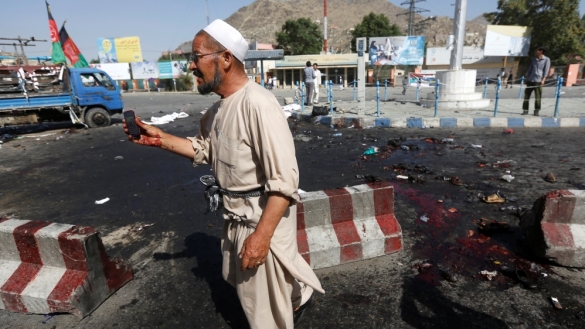 The week after the horrors in Nice was another brutal one, a visceral slog through the depths of today’s insanity, focused mainly on Germany.  An axe attack in Germany. A suicide bombing by a Syrian refugee in Germany. Another German tragedy, an American-style mass shooting, was (seemingly) not directed or inspired by ISIS or al-Qaeda, or any militancy at all, save for the militancy of a disturbed criminal mind (which: same with Nice, and Munich, and Orlando. Same mindset; barely-different justifications).

There was also a massive suicide bombing in Afghanistan, in which 80 people were killed and another 230 were wounded. It’s a strange number, 80. On the day of the Nice attack, as the number kept spiraling upward, 80 seemed unimaginable. It feels different in Afghanistan, though. It feels almost normal. We’re inured to violence there, in a way that dehumanizes the victims of ISIS. Even when lip-service is paid, even (especially) when politicians say that “ISIS kills more Muslims than anyone else”, there’s a feeling that those lives don’t matter. They certainly don’t grab the headlines.

That’s partly a man-bites-dog thing, of course: Afghanistan has been in a state of near-constant war for nearly 40 years, and we’re fatigued. Same with Iraq and Syria and Lebanon and Yemen and anywhere else where people are seemingly constantly being killed. It seems like part of normal life, just the regular course of things. We have trouble extending empathy to imagine them feeling the same kind of pain we can envision in France or Germany.

The thing is though, one of the grossest tragedies of the Afghanistan suicide bombing is who the targets were, and why they were there. The targets were the Hazara, Persian-speaking Shi’ites, a minority based mainly in Afghanistan who are the frequent target of the Taliban, of ISIS, of al-Qaeda, of the Pashtun, and others. They are frequently kicked around, and struggle for protection. Iran is the one constant friend.

So, then, why were they all in a group, able to be targeted?

The protesters were marching against government plans for a major power project to bypass Bamiyan, a predominantly Hazara province in the central highlands. Following similar protests in May, Afghanistan’s president, Ashraf Ghani, established a commission to look into the issue but government attempts to find a compromise failed. On 19 June, a contract was signed to build a smaller electricity line through Bamiyan, which did not placate Hazara activists.

The 500-kilovolt TUTAP power line, which would connect the Central Asian nations of Turkmenistan, Uzbekistan and Tajikistan with electricity-hungry Afghanistan and Pakistan, was originally set to pass through the central province.

But the government re-routed it through the mountainous Salang pass north of Kabul, saying the shorter route would speed up the project and save millions of dollars.

Electricity. Power. Zoning. The desire to be economically and literally connected. The decision to bypass them might have been to save money, or it might have been to further put the screws on the Hazara, or it may have been both. The former might have been an excuse for the latter, or maybe just a coverup for it. The reasons are part of Afghan history and politics, and I don’t feel comfortable speaking to them.

But the protest? That’s normal life. That’s a group of people who are tired of their situation, who feel oppressed, and who want something that is normal. Take away the historical oppression, and imagine it as anything else: a potentially lucrative and life-bettering development was going to happen (imagine it if you want a railroad or a dam or a base to build the newest military joint-strike hybrid disaster) and then it was taken way. The hydroelectric plant was supposed to go near this town but the TVA shifted it away. There are a million parallels around the world. Anyone would be mad, and anyone would protest.

That’s exactly the point: this is normal life, or at the very least, the desire for it, taken away in a energy-filled pulse, that pulverizes organs and rends limbs and makes the face of life unrecognizable. These are (and were) human beings, who despite living in a land of war, many of whom have known war and terror their whole lives, who are willing to stand outside and protest electrical lines. They petition for surveyors and government project planners to look over their notes again and maybe try something new. They are standing up in the city council meeting of a mid-sized Illinois town and asking for the baseball diamond on 4th to be maintained.

There’s no simple answer for terrorism, and the extension of empathy (which can’t just be willed, not even for someone who tries) won’t end it. The recognition that Muslim lives are real won’t stop ISIS, especially when they are the ones taking Muslim lives like a joyless Queen of Hearts. But the dehumanization of Muslim lives, whether that is in the headlines or in the speeches of politicians who treat refugees like a murderous and faceless horde, serves the recruitment purposes of our enemies. It can help a non-political, non-active, and not-even-particularly-religious immigrant decide that they are going to move from petty crimes and personal abuse to a mass killing, in the vague name of some group they barely know. It’s a cycle that will take a generation to break out of. But that doesn’t mean we don’t have a duty to start.